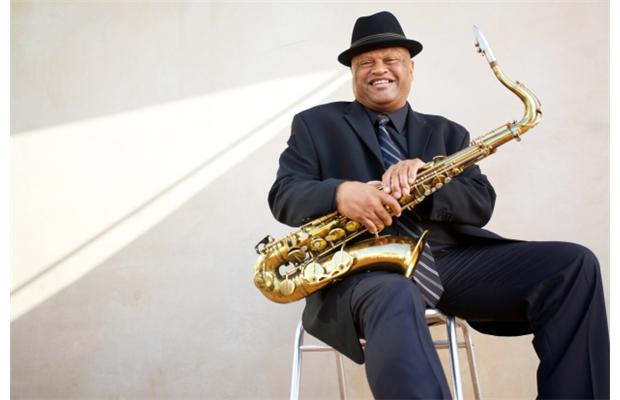 Saxophonist Azar Lawrence has never been shy about admitting John Coltrane’s influence on his playing. The Los Angeles-born tenor player famously stepped into the legendary saxophonist’s shoes, playing in the bands of both pianist McCoy Tyner and drummer Elvin Jones not long after both left the classic Coltrane Quartet. After being hired by Tyner, he asked the pianist why he’d been deemed worthy.

“I asked McCoy, ‘How could you play with a guy like me after playing with the great John Coltrane?’” Lawrence recalls. “He said, ‘As long as I don’t have to slow down to hand you the baton in this relay race, we’ll be fine.’”

Lawrence has now run with that baton for more than three decades, carving out a lengthy career as a bandleader while also playing alongside greats like Miles Davis, Marvin Gaye and Earth, Wind and Fire. Coltrane is a towering influence in jazz, of course, and Lawrence is an ardent disciple not only of Trane’s tone and technique but of his spiritual leanings, as showcased on his latest CD, The Seeker (Sunnyside). He’ll perform music from that CD as well as some of Coltrane’s compositions as he headlines the 8th annual Lancaster Avenue Jazz & Arts Festival on Saturday with a stellar band featuring pianist Benito Gonzalez, bassist Essiet Essiet, drummer Brandon Lewis, and the great trumpeter Eddie Henderson.

The free jazz festival is hosted by the People’s Emergency Center (PEC), which provides families in need in the West Philadelphia community with housing, job training, counseling, and other services. The festival, says Cassandra Green, manager of community outreach and partnerships at PEC, “is an opportunity for People’s Emergency Center and its partners and sponsors to celebrate the arts and culture from a community perspective. It provides an opportunity for the whole community to come together and to highlight the West Philadelphia area.”

After doubling attendance for last year’s festival, which was headlined by saxophonist Tim Warfield Jr., the PEC received a $10,000 “Challenge America Fast-Track Grant” from the National Endowment for the Arts. In addition to a full day of music, including performances by Josh Lawrence, Shakera Jones, Nasir Dickerson, and a youth ensemble from Play On, Philly, the event will include a family fitness challenge, a pop-up digital lab, vendors and food trucks.

Lawrence is an apt headliner for such a community-minded festival given his dedication to the kind of spiritual and mystical communion advocated by Coltrane in his later years. “The people who play this type of high vibrational music are consciously in touch with being a channel for the higher art forms, in this case music, to stream through,” he says. “Therefore, they have a rapport with the audience and hopefully in that rapport can provide some type of healing to themselves and to those who are touched by it.”

The Seeker, Lawrence explains, depicts a spiritual journey over the course of seven tracks recorded live at New York’s Jazz Standard. The music travels to the rain forest (“Rain Ballad”), gazes toward the night skies (“Venus Rising”) and rediscovers the “Lost Tribes of Lemuria,” the Pacific version of the lost continent of Atlantis. One track is named for Mahatma Gandhi, who Lawrence cites as an ideal example of a seeker.

“The idea behind The Seeker is that each one of us is a seeker of knowledge and truth, or we seek to find out what our purpose is during this lifetime,” he continues. “We might seek how to live right and eat right so we can obtain longevity in this lifetime, and then there’s also seeking for knowledge of a spiritual and cultural nature. And once we discover that, we have to live what we’ve discovered. I’m trying to bring some awareness of those facts.”

As for his own journey, Lawrence says, “I’m glad to be alive and able to continue the tradition of fire music that cleanses and inspires us to look to higher ideals. That’s what we’re doing.”