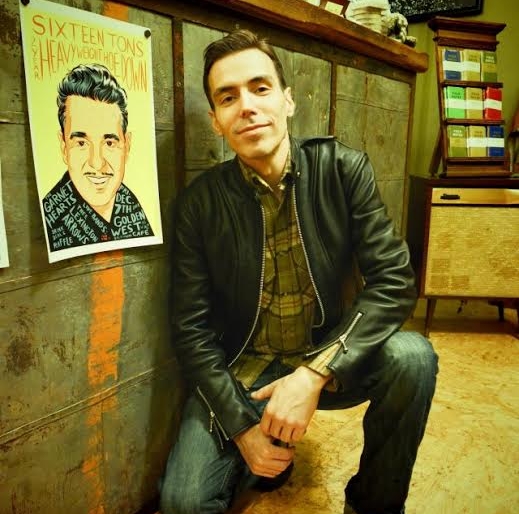 Unless you’re a contemporary cartoon junkie, it’s likely you’ve never heard of Alex Fine. But if you’ve been going to shows at the Mann Center the last few summers, chances are you probably have a few of his baseball cards laying around in a shoebox of ticket stubs.

The Baltimore freelancer, who also teaches at Maryland Institute College of Art, has been creating the signature souvenirs for the Mann Center’s Skyline Stage performances since 2011, surprising concert-goers with caricature-like images of their favorite musicians. (The Lorde card from last weekend’s show even got some attention from MTV.com.) For some fans, these baseball cards remain the only image they have from the evening when bands like Neutral Milk Hotel enforce an embargo on photography at shows. We called up Fine to do a quick Q & A with him and ask how his work became such a fun part of the Mann Center experience.

The Key: So you’ve been illustrating musician baseball cards for The Mann since 2011, right? How were you approached for this project?

Alex Fine: Back in 2010 I was doing work for Philadelphia Weekly. I had these mini-posters in the different issues fort artists like Passion Pit and Arcade Fire – they were postcard size and had a continuous cityscape, you could put that collection together to make one image. So [Mann Center promoters] AEG Live contacted me and it continued from there.

AF: When they had the idea, they figured it would be a good idea aesthetic to match it with the feel of the performer, like Kid Cudi had a more ’80s looking card, and Willie Nelson had a ’60s looking card. I usually go through Google images to research it a little. Since baseball cards from each decade have a different look, there’s a lot of styles to choose from and channel. [At first] I was a little worried because they wanted me to design the back of the card, too, but it was a good experience learning design tactic for that. This year the backs are all the same.

TK:Do you come up with the artist stats and fun facts included on the back of the cards, or are those provided for you?

AF: They [AEG] provide the info, things like “this artist has won” or “so-and-so performed with…” 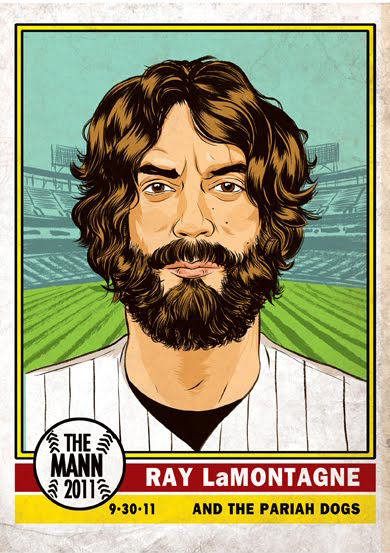 TK:How do you develop what position each musician will be featured as on the card?

AF: For me it’s always easiest when it’s one prominent musician. But for others you have to think about it a little more – for example, someone as elusive as [Neutral Milk Hotel frontman] Jeff Mangum wouldn’t want to be front and center.

TK:Which one was your favorite to create?

AF: Oh, Ray LaMontagne. He’s such a characteristic-looking person, he has these angular features and all this crazy hair— my favorite thing is to draw hair. I just did a job with Schick razors and it was my favorite job ever because it’s just drawing hair.

TK:Was there an artist you really struggled to capture?

AF: Sarah McLachlan. Every time I’d draw her, she just looked like some random woman. She has very edgy music, but not an edgy style. She didn’t have those unique features to exaggerate. Also, R. Kelly because he looked like DJ Jazzy Jeff every time I drew him. You have to work off photo references because you don’t have the fortune to work with them in person. There aren’t a lot of celebrity high res images so it’s difficult to channel it spot on. Each card is usually at least a whole day at work. I use a brush pen and then scan them. Since I don’t use Adobe Illustrator (or vector programs), I hand draw everything and edit on Photoshop. Jen Corsilli (AEG Live’s Regional Marketing Manager) writes out the back in a design information that I can drag into a new design file, she’s a collaborator.  They [AEG Live] make my life a lot easier than it could be, working with PR firms or promotion companies is surprisingly easy. AEG’s been great to work with.

TK:Oh, that’s cool. I can’t imagine looking up so much information for all those artists. How many cards have you drawn at this point?

AF: They average about 20 a summer…

AF: Oh, wow, I hadn’t realized there were that many until just now (laughs). Yeah, I guess there are about 80.

TK:Do you ever ask any of your students to assist you with the project?

AF: Well, I have an intern. When I get a print done I scan it to the intern and they block out the colors in the design. Most illustrators have their own signature style so it’s hard to find two artists in sync enough to do it. It can be tough time-wise, but as the summer goes on you get a rhythm going. Once you have a momentum you find yourself going faster.

TK: I’m sure a lot of Key readers would like to know if there’s a way to find or buy the cards after a concert if they didn’t pick one up or didn’t attend that show- are they available elsewhere?

AF: I don’t feel like it’s my place to reprint them. AEG can work out those things. People do email me, but I feel bad reprinting them. However, I do offer to sell the original drawings. I don’t have any sentimental attachment to my art because it’s work, and I did that for some of the Phish concert goers who wanted them.

AF: It’s something I look forward to every summer, during the year I have a very routine way of life. I work at home, I watch Netflix movies all day while I work. It’s good to go to the concerts sometimes, too. It’s been really fun to do. I always liked Bob Dylan and doing a Bob Dylan one was awesome. But because of the nature of my job, deadlines are so quick I don’t have time to go away [for the shows]. My wife’s favorite band was Neutral Milk Hotel – like she was really into them, so it was cool to draw that one. My taste is more punk rock. 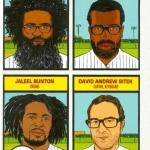 You can pick up a keepsake baseball card drawn by Fine at each of the Mann Center’s “What Summer Sounds Like” shows. Upcoming shows at the venue this week include The Gaslight Anthem on Friday, September 12th, and Dr. Dog on Saturday, September 13th; check out our concert calendar here.