The Ultimate Basement Show: Why Gainesville’s FEST is so important to the Philly DIY scene
Events Regions

The Ultimate Basement Show: Why Gainesville’s FEST is so important to the Philly DIY scene

By Beth Ann Downey and John Vettese
October 15, 2014
12:10 PM
Share
Philly’s Restorations is headed to Gainesville’s FEST for the fifth time, and timed it’s new album release around it | photo via restorations.tumblr.com

Some musicians route their tours around it. Others plan major releases to coincide with it. Others still will travel thousands of miles to play a one-off show at it, turn right around and head home.

The annual FEST in Gainesville, Florida, has become something of a DIY scene mecca over its 13-year existence. A series of punk concerts housed in a handful of venues over the course of a weekend where, as legend has it, the University of Florida’s football team is always out on an away game, THE FEST – usually written in all-caps, but not for any particular reason – is a huge draw, especially for artists from the Philadelphia region.

This year, Philly boasts something like 19 artists on the lineup. We say “something like” because a musical hometown is an inexact science. Mannequin Pussy is listed on FEST’s website as a New York band, even though it currently calls West Philly home; Creepoid moved to Savannah earlier this year, but maintains strong local ties and is touted as a Philly band. Spraynard is rightfully identified as a West Chester band, and Aspiga as a Collingswood, NJ band, though you’d be hard pressed to find a local fan who doesn’t consider them part of the Philadelphia punk community.

But we digress; the point here is not to make definitive “who’s from where” arguments, but look at the bigger picture. However you slice it, the greater Philadelphia region – with acknowledgement of the vibrant communities in the Western suburbs and South Jersey – is more represented than almost any other in the lineup of FEST, matched only by Chicago. The question then becomes, “Why?” What drives dozens of players from our area to trek 13 hours south for a Halloween weekend gig in a Florida university town?

“FEST is the ultimate basement show,” reasons Mike Stoloski. His band, Ma Jolie, is playing its third consecutive FEST this year. His bandmate, drummer Jeff Meyers, has three other FESTs under his belt with Jena Berlin, the crew he played in with Jon Loudon and Dave Klyman of Restorations. Speaking of them, Restorations is back for its fourth consecutive FEST (and fifth overall) this year.

“I think any band will tell you it’s their best show all year,” Loudon says. “You get to play for a cross section of every city you’ve ever played in. It’s this massive feeling.” 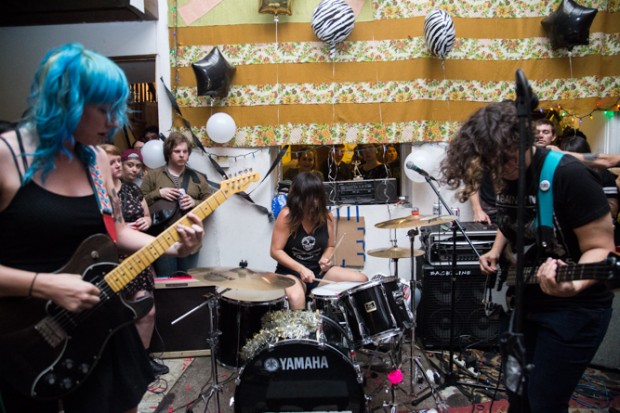 “It takes every die hard fan from around the world and puts them in one tiny town to freak out together,” adds Kelly Olsen, drummer of Cayetana. “Anyone at your show is there to see your band. It’s pretty much a punk rock vacation, no one came from work or has to wake up early. You’re there to experience as much as you can and see all your favorite bands. That makes the energy electric, which makes for some of the best shows you can play!”

Olsen is making her second trip to Gainesville as a performer this year, but says she first started going to FEST simply as a fan, long before she moved to Philly. She went to school in Oswego, a small college community in upstate New York, and while she lived there, had a hand booking shows in town – primarily because she wanted shows to go to.

“It was a fun and dedicated DIY scene there, but small,” Olsen recalls. “So, when I heard about FEST so many years ago and saw the lineup of all my favorite bands, I couldn’t resist. I was one of the people constantly checking the website and counting down days till I could go.”

“I think FEST definitely breathes life into the punk world,” she continues. “So many kids that go are from small towns that don’t get toured often, or ever. And to line up all of someone’s favorite bands in one weekend to see, well that’s just heaven.”

Stoloski recalls that he first heard about FEST through “unbelievable word-of-mouth stories,” stuff like Paint it Black playing out of a U-Haul in a parking lot. (This year, PIB is a Friday night main draw at University Avenue club 8 Seconds.) He described Ma Jolie’s inaugural year as “a wild first experience.”

“We had only been a band for a little under a year and we weren’t playing until 1:15 a.m.,” Stoloski says. “I was pretty confident that no one was going to show up. I remember walking out of watching Restorations play across the street from our venue to a wild, wild, packed house and got really nervous about our set, but when we went on friends just came out of the woodwork. It was one of my most memorable experiences playing music. I remember it being 2 a.m. and I was trying to hug everyone around me. That kind of thing will make me want to go back until they stop letting us.”

Loudon’s Restorations made a big impression during THE FEST 10, the same year their self-titled debut was released on Tiny Engines records. The reception they got, as he put it, “kick started this crazy journey we’re on now,” and it’s certainly no coincidence that his band’s eagerly anticipated LP3 gets its release on SideOneDummy records on Tuesday, October 28th, the week of FEST.

“Totally intentional,” Loudon admits. “We knew we’d be out on the road for FEST this year, so we planned accordingly. FEST got us our first big break, so we’re trying to return the favor.”

Other releases coincide with FEST, like the Tiny Engines vinyl issue of Beach Slang’s Cheap Thrills on a Dead End Street, though frontman James Alex – a Bethlehem native moved to Philly – says that was a less calculated move on their part. It had more to do with when the recording and artwork was completed.

“Marketing just isn’t something you think a whole lot about when you’re smacking your guitar around all the time,” he says.

These opposing accounts lead one to wonder what role, if any, the idea of marketing – or at any rate, some nonchalant punk variation on such – plays into the goings-on at FEST. Do bands go to Gainesville expecting to break out? Or do they go for fun?

Most musicians we talked to seem to agree it’s a bit of both – a chance to be seen by your peers and new fans. And, as Loudon put it, “once you’re more established, it’s a big messy family reunion.”

Olsen reiterates that it’s a way to connect with everybody you’ve seen on tour for the past year, but all in one place – musicians as well as fans. “I think it’s about the experience as a whole rather than a turning point in a band’s career.”

Stoloski has a different opinion of the typical FESTer’s intentions. “I think listeners are going to make their decisions on what they want to expose themselves to before they get down there,” he says. “I don’t think the goal for a FEST-goer is to check out new bands (at least ones they haven’t heard). I think that it is more of a goal to see as many of their favorite bands as possible.”

But even if Beach Slang played to an empty house, James reasons, there’s still a bright side. “I mean, let’s say our show is just a wild flop, I’m still going to be in Florida having the time of my life. For that, it means something.”

So CMJ it is not, SXSW it is not. And that’s probably a good thing.

“I think FEST is a lot more like the lore of CMJ and SXSW,” Loudon says. “You can actually go there and get discovered. The shows aren’t so corporate and micromanaged. It’s a bit more of a free-for-all, and as a spectator, you really can go around and just find great new bands at random.”

Another factor is the organization of FEST. While scores of booking agencies, PR outlets and labels are represented, making it a punk microcosm of the music industry rodeo, it’s still primarily the work of one central organizer, influential Gainesville label No Idea Records.

“Festivals like SXSW and CMJ etc are dipping into music pools of all genres, drawing more diverse crowds and have access to what I assume is a much larger budget than No Idea,” says Olsen. “I’ve never been to SXSW or CMJ but I would assume that the kids that go to THE FEST have a lot more in common with each other than other types of festival-goers.” 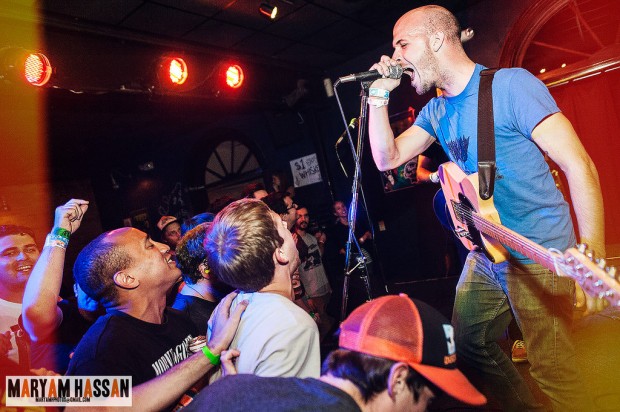 “Is there an industry aspect to it? I guess, but what exactly is the pop-punk industry?” says Stoloski. “Unless you’re playing at one or two of the main stages in Florida, your band’s only industry is the other bands that help you out when you are coming through their town, the super devoted people who put out your records, and the 25 to 300 people that wander into your venue that night.”

But one cannot label FEST as a festival free of faults. Though it’s getting better, Olsen says there is a certain “broman culture” apparent in Gainesville that mirrors the scene as a whole.

“This year I have noticed there is a significant increase in women performers, and I am incredibly excited about that,” she says. “But, at past FESTs, I’ve always had the conversation about lady musicians and their representation or lack there of. The void was noticeable to me and my friends.”

Olsen says that the scene is becoming more inclusive, and that’s easy to see at shows she goes to in Philly.

“But, it’s obvious that the punk scene still has a long way to go,” she adds. “I always felt that punk music was about community and you have to build and nurture your community, it doesn’t always come easy.”

It’s events like FEST that nurture the punk community, mostly for the better. And it’s the pervasiveness of Philly bands on the line-up that continues to build our city’s reputation as a great place for punk, and for live music in general.

“Philly just has the best punk bands for miles these days,” says Loudon. “The whole city just moves down to Gainesville for the weekend. It’s kind of weird.”

“We’re all inspired and intimidated, supported and pushed by each other. Everyone wants everyone to succeed. …It’s pretty right on,” adds Alex. “And, for FEST, yeah, it feels like a whole scene is migrating south for the weekend—a scene within a scene or something. It’s like when you’re at a party with friends, your bravado’s a little wider, your talk’s a little braver. I dig that.”

“The sense of community extends far beyond seeing people from Philadelphia,” counters Stoloski. “Don’t get me wrong though… It is cool that you can’t walk down University Ave. without seeing someone from Philly walking the other way, playing a show, or rolling by on a rented scooter. It makes the town more welcoming. But being a band at FEST is much more about seeing all of these people from different cities interacting. All of these bands are doing the same things, with the same people but at different times.

“When you are at FEST and all of these people are in one spot, it’s a little euphoric,” he concludes. “Every little relationship collides.”

THE FEST takes place in Gainesville, Florida, from October 31 to November 2; passes and individual showcase tickets are still available and can be purchased here.