Hop Along signs to Saddle Creek Records; new album due in spring 2015 - WXPN

Hop Along signs to Saddle Creek Records; new album due in spring 2015

It’s always exciting to find out good news about our favorite Philly music folks, and today we’re positively stoked to report that Hop Along has inked a deal with venerable indie rock label Saddle Creek Records. The band’s follow up to the outstanding 2012 release Get Disowned – which will be either its second or fourth full-length, depending on whether you count the self-released albums Freshman Year (2005) or Is Something Wrong? (2008) – comes out on the Omaha-based label in spring of 2015.

When you look at the roster of Saddle Creek and consider the impressive aesthetic of Hop Along, it couldn’t be a more perfect fit. The label rose to prominence in the late 90s and early aughts thanks in no small part to the hugely popular Bright Eyes catalog, as well as releases by Cursive, Now It’s Overhead, Azure Ray, The Faint, and many more. Recently, it’s had success with The Thermals, Pujol and The Rural Alberta Advantage. This is an eclectic roster of art-first artists and strong songwriters / storytellers; they may not be exactly “punk,” but have strong roots in punk sensibilities and a DIY philosophy. That about describes Hop Along to a tee, whether you’re considering its humble beginnings as a solo home-recorded project of frontwoman Frances Quinlan (known then as Hop Along, Queen Ansleis) or the current four-piece powerhouse featuring her brother Mark Quinlan on drums, Tyler Long on bass and Joe Reinhart (formerly of Algernon Cadwallader) on guitar.

“Saddle Creek has always been interested in spotlighting unique voices that we feel are expanding upon the current landscape of underground music,” says label owner Robb Nansel. “It was instantly obvious to me that Frances had an approach to songwriting that was unlike anything else we’d heard. Aside from the music, we are always looking to work with artists that are genuine and fun people to form relationships with. After a couple phone calls and a trip to Philadelphia, the jury was in.”

This week, the band heads into the studio to record with producer John Agnello – who did Sonic Youth’s The Eternal and Rather Ripped, Kurt Vile’s Smoke Ring for My Halo and Wakin on a Pretty Daze, The Hold Steady’s Stay Positive and Boys and Girls in America and much more. Seriously, dude’s resume is impressive, and I’m sure will work wonders on the new Hop Along songs we’ve been hearing at shows this year.

The band is pretty psyched as well.

“I’m just really excited to work with a label I respect so much as a creative entity in and of itself,” Quinlan says. “I have had many great experiences growing up with a lot of the records they put out, records that sounded so new and strange to me. By new and strange, I mean it was the first time I really thought of music as art and expression.

“What they have already achieved has been such an inspiration to me,” she adds. “I’m very proud to now be a part of that.” 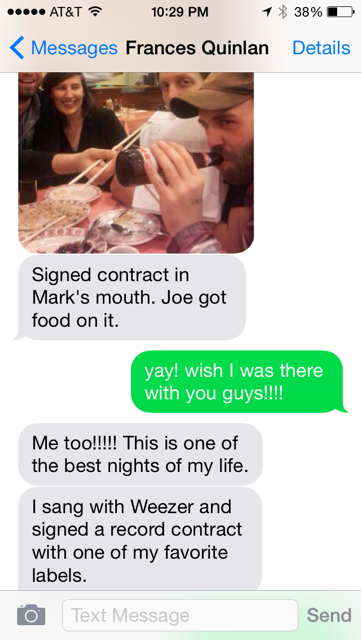 Which gives some added explanation to why Quinlan looked so totally happy on Saturday night.

While we wait for the new record and accompanying new song teasers, you’ll be able hear some of Hop Along’s new material live on New Year’s Eve when they headline Johnny Brenda’s. Tickets for the show go on sale Friday at noon; more information can be found at the venue’s website. And of course, mega congrats to Hop Along; spring of 2015 can’t come soon enough.