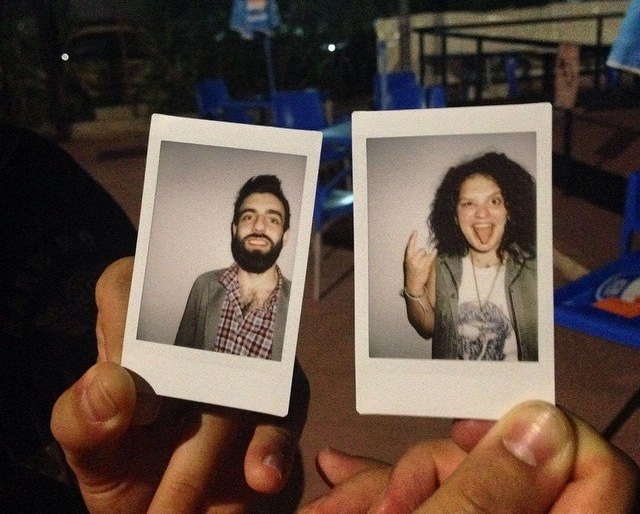 Maybe it’s something in the genes, but the two greatest success stories to come out of the Paul Green School of Rock have been siblings Eric and Julie Slick. Both caught the ear of Adrian Belew when the former Zappa and King Crimson guitarist/vocalist stopped into the school to teach in 2006, and went on to form the core of his Power Trio. Drummer Eric left in 2009 and landed in a number of Philly bands including Dr. Dog and Norwegian Arms, but bassist Julie has continued to orbit King Crimson in the years since.

In 2011 she attended the “3 of a Perfect Pair Camp” organized by Belew and Crimson-mates Tony Levin and Pat Mastelotto and went on to tour with the three (as well as new Belew Power Trio drummer Tobias Ralph) as the Crimson ProjeKCt, the latest iteration of Crimson’s spin-off incarnation.

While at the camp Julie also met Italian bassist Marco Machera, forming a duo around the pair’s shared interest in expanding the vocabulary of the bass. Between the two of them, and with a fair share of electronics, the two can become a virtual orchestra with only eight strings, coaxing all manner of sounds from the electric bass: percussive, ambient, shredding, industrial, hypnotic. They’ll play the Hard Rock Café on Friday night with two additional guests sure to expand that sonic palette exponentially: Philly guitar wizard Tim Motzer and Pat Mastelotto, last seen in town as one of three drummers in King Crimson’s latest, most rhythmically labyrinthine line-up.