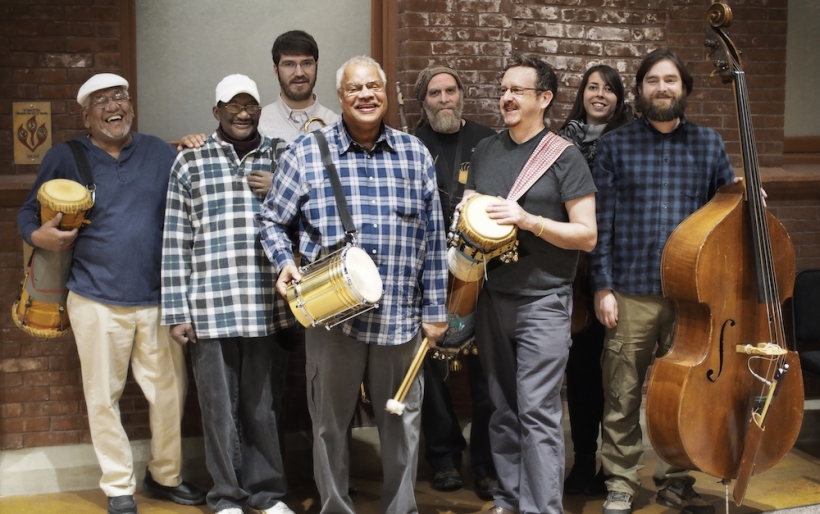 Living in New York City between 1976 and 1985, Kevin Diehl found himself in the midst of the fertile loft jazz scene. During that now-legendary period, some of the most influential and forward-thinking musicians of the last half-century gathered together in Soho, forging a new sound building on the 1960s avant-garde and asserting their independence from major record labels and nightclubs. They were a group fueled by the communitarian spirit of organizations like Chicago’s Association for the Advancement of Creative Musicians (AACM) and St. Louis’ Black Artists Group (BAG).

At the same time, in neighborhoods like the Bronx, influences from Latin and Afro-Cuban music were bleeding together with jazz through the work of groups like the Fort Apache Band, led by brothers Jerry and Andy Gonzalez, and pianist Michelle Rosewoman’s New Yor-Uba Ensemble.

During the period that Diehl lived in New York, these rich hybrid musics cross-pollinated with one another and planted the seeds that would grow into his long-running group Sonic Liberation Front once he returned to Philadelphia. The amorphous, percussion-heavy ensemble melded the improvisatory spirit of free jazz and the loft scene with ancient Lukumi compositions, the Afro-Cuban devotional music culture that originated in Nigeria hundreds of years ago.

“We had to carve out a unique point of view with regards to Lukumi culture and ‘jazz’,” Diehl says. “I think there are real similarities between ‘New Thing’ composers like Albert Ayler and Sunny Murray and original Lukumi composers.”

One of the artists who crossed between both of those scenes was saxophonist Oliver Lake, a key member of the BAG and co-founder of the World Saxophone Quartet. The prolific Lake has long traversed stylistic borders and was a member of Rosewoman’s New Yor-Uba Ensemble from its inception.

On Sunday, February 22nd, Diehl will bring his influences full circle with a performance at The Rotunda by his rechristened Sonic Liberation 8 featuring Oliver Lake and the Classical Revolution Trio. Lake, whose expansive imagination has taken him as far afield as collaborations with Björk, A Tribe Called Quest, and Lou Reed, has penned two new compositions for the occasion. In addition, the concert will feature new arrangements of Lake’s “Love Like Sisters,” which originally appeared on the World Saxophone Quartet’s 1991 album Metamorphosis, and a radical reinvention of Erik Satie’s “Gnossiene No. 1.”

“Oliver Lake is so prolific and eclectic,” Diehl says. “It was important to me that he be central to this performance, to not just be a session player. So his compositions are front and center. His pieces are very ethereal; they sound like something he would bring into the World Saxophone Quartet. You hear that interesting interplay of harmony and movement, and he makes use of the drum ensemble really well. It really puts you into this other space.”

The string trio – violinist Russell Kotcher and cellists Eric Coyne and Melanie Hsu – are members of the Philadelphia faction of Classical Revolution, a nationwide organization dedicated to taking classical music out of concert halls and into more unusual and accessible spaces. Kotcher and Coyne are also both members of North Philly’s Prometheus Chamber Orchestra, which will collaborate with Diehl and Sonic Liberation 8 on a multimedia piece in the fall.

These larger-scale performances are indicative of the vision that Diehl has for his ensemble going forward. “Where we are now,” he explains, “every time we perform, especially in Philadelphia, it has to be something that’s really unique and something that didn’t exist before.”

That change in philosophy is represented in part in the band’s name change, which also clearly delineates it as a more focused unit and also removes a trace of the guerrilla spirit that Diehl says is less appropriate in the current political climate. “It identifies us as an octet and not this unwieldy army, and it’s a less confrontational name. The world is different relative to ten or fifteen years ago when we started the ensemble. Groups like Boko Haram are out there, and even though it’s a creative statement and is borrowed interest on people with valid political agendas, I’m sensitive to that.

“I don’t think we’ll end up on a watchlist for having the name Sonic Liberation Front, but our sound is completely different now. In the past it was strictly: what if [avant-jazz saxophonist] Frank Lowe and Batá players from Cuba got together? Now it’s slightly different. We still have an affinity to the loft jazz scene, but there’s also a chamber music aspect to our sound.”