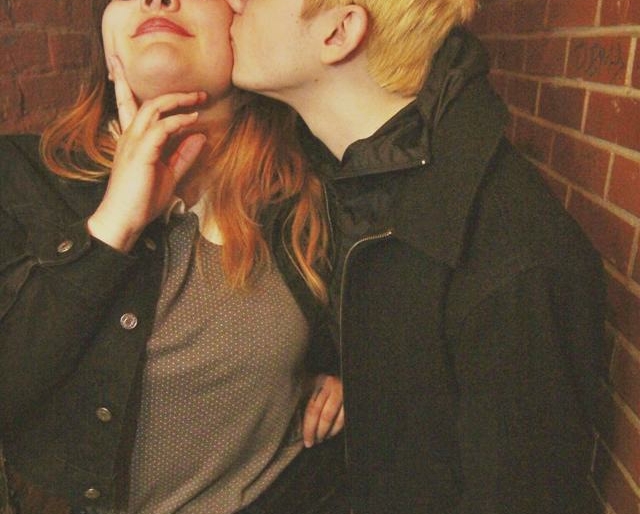 It’s a blustery day at the end of January when I meet up with Zoe Allaire Reynolds and Colin James Kupson, the Center City/South Phila. duo who play as Kississippi. I race to the basement of Last Drop coffee shop, finding the two of them laughing over a sandwich and very colorful cupcakes Zoe brought from work.

Immediately we shift from their current perch on the couch to a table, where Zoe drapes her long red coat over a chair. I notice all three of us are wearing bright hues of orange and red; Zoe decides it’s all serendipity. Getting started with the interview, I ask about how the band got started, since the online releases of “Kissi’s” music come from varied lapses of time.

Zoe starts, “Well, …July? Technically August-ish.  Maybe July? I’ve been writing songs for a while as kind of like a solo thing, so for a while it was just like me. But then I met Colin, and— ”

I interrupt. “How’d you guys meet?”

Colin shares that he was just scrolling through faces and recognized Zoe’s. “Well I went past her face on Tinder, and I was like, ‘Wait, hey, isn’t that the girl whose face Ally [a mutual friend of the two] posted on the internet months and months ago?’ and then I was like, ‘Hey, you’re vegan, I’m vegan, let’s talk about that’ and then we were talking about dogs.”

Zoe goes on. “We had a lot of mutual friends and mutual band interest things on Tinder, and we were like, cooool.  And then we started hanging out. I brought my dog to go meet him, and then we just hung out in a grassy area near his dorm.”

Colin continues. “After that I heard her playing music, and was like, ‘oh, this is tight,’ and we started playing together.” The comfort level between the two is so obvious and relaxing, giving off the impression they’ve known each other so much longer than six months.

“It’s funny because I’ve met like a lot of people who I’m friends with on Tinder. Like it’s more for that than actual dating,” says Zoe.

Colin nods his head. “Yeah, like I was saying, oh my friend posted this video to Instagram and she—” he points to Zoe, “was like ‘Oh, did you know her from back home?’ and I was like, ‘No, I know her from the internet.’ So, I guess sorta friend? More like an acquaintance.”

I know that feel, and remark “It’s funny when you know people from online, and you know you’re both going to a show so when you actually meet you’re just like, ‘oh…HEY!’” Colin, who is a freshman Music Business, Entrepreneurship and Technology major at University of the Arts, reflects for a second and determines the two met in August, as he didn’t even move to Philadelphia until the end of summer.

“Right after I released the EP [i can feel you in my hair still], I kind of wanted to make it like a full band thing and then Colin was the perfect fit. I think it’s going pretty well as just like a two person thing,” says Zoe.

The pair’s melancholic bedroom sound is a sweet marriage of delicate wails and rainy day guitar strums. Zoe’s poignant lyrics reflect a dreamy heartbreak, and her soft voice complements the rise and fall of Colin’s melodies all too perfectly. To say “it’s going pretty well” is an understatement to the delightful little bubble of happiness the two so clearly have surrounding them.

I bring up the EP, which Zoe released over the summer before Colin joined. An isolated track, “ears ringing, fingertips lingering,” showed up on the web late last spring from Kississippi, way before the EP was released. I ask “Why wasn’t this included on i can feel you in my hair still?”

Zoe looks surprised I know it. “Oh, that’s actually a cover of one of my friend’s songs. I have a friend in Nebraska, who plays as i forgot to love my father, and he wrote that song. So it felt wrong to put it with the other songs, since I was charging for the EP. He actually plays on one of the songs on the EP.”

“That’s the one that sounds like a Slipknot one, right?” Colin asks Zoe.

I picked up zero Slipknot vibes from any part of this EP, and the look of surprise on my face must have expressed that. Colin laughs at me. “No, no, no, it’s weird. It’s like a Slipknot song, and when you like play the Slipknot guitar part over it, it shows.” I’m still confused.

“Well, our new sound is…” Zoe looks at Colin. “It’s a little heavier. Not like a heavy—”

“It’s dream pop. But there’s more attitude to it. I don’t know,” Colin “concludes” and giggles.

The band has an 8-track release in the works, which Zoe expects to be ready by early to mid-April. “We’re planning a show for April Fools so …it would be really cool if we finish our album by then and could release it on April Fools Day and be like ‘it’s all a joke.’”

She excitedly starts sharing details from the new album. “Well, we were talking about recording an 8 track album, and I had like a lot of people just send me music they recorded before, and a lot of them were doing it for free, and I was like, ‘Do I want to have someone do it for free or do I want to pay someone money and get something that sounds really good?’ And Jake [Ewald, of Modern Baseball] made a status that was like, ‘Hey, while I’m home I want to record some bands,’ and I was like, ‘What’s up?’”

The two have about six of the songs ready for recording at this time.  “I can spend hours just sitting with one song and being like, ‘this is what I want…no, no, this is what I want!” Colin says. I—half-jokingly— compare it to an Instagram filter. “Let’s check out this light, let’s compare and contrast, ” says Colin.

“Well, there’s Ludwig, but Perpetua looks so good, too,” I joke.

Colin turns to Zoe, “You usually get the chorus, and then she’s like ‘here’s the chord structure,’ and then I’m just an asshole and add more chords all over it.” When the topic of collaborations comes up, the list goes on and on.

“In our wildest dreams?” Colin asks.

“You know The World Is A Beautiful Place [& I Am No Longer Afraid to Die]? Chris Teti. He’s the one with the long hair; he’s a really good record engineer and a really talented guitar player. Also, Enter Shikari,” Colin grins.

He later explains that he’s very into metal and hardcore music, as well, which cleared up a lot of confusion over the whole Slipknot x Kississippi conversation we had earlier. Colin’s more or less in three bands at the moment: a hardcore project entitled Birthright Born Wrong, a companion project to Birthright Born Wrong, and recently wrapped a brief stint with Cyberbully Mom Club. “That’s why I’m so tired all the time,” he laughs.

Zoe lists her possibilities of collaboration dreams. “Well, if my friend JP [Jon Perry Davis of i forgot to love my father] lived here, the three of us would be playing together all the time. Also, Robbie Grote [of The Districts] is a friend of mine and we’ve been talking about having him do backups on the new album. Other than The Districts, we just met this band called Diet Cig. They’re really awesome, very poppy.”

“Yeah, cutest people ever,” Zoe laughs. “We want to play with them again soon.”

“Oooh yes,” Zoe’s eyes get wide. A few minutes later we’re engaged in the possibilities of an early Taylor Swift- Karen O mashup, and then Zoe’s concentration breaks. “Ooooh, I just remembered. Hellogoodbye! The other day my roommate and I were listening to some old songs—some pretty bad stuff, like Mayday Parade and All Time Low, but then Hellogoodbye came on… I’m going to play some so you can hear how much Hellogoodbye probably influenced new Kissi.” Zoe pulls out her phone and plays “Dear Jamie…Sincerely Me.” We all pause for a moment and listen along.

As the two start scrolling through their phone to look up shows they’re playing or attending, Colin gives some unsolicited yet humorous life advice, “Go to Blackbird Pizza. Ruben Polo is forever. Read Watership Down, that’s a good book….And if you’re ever thinking about getting a haircut, always get it. If you’re already thinking about parting with something, you’re already having doubts, and a haircut is the most physical form of catharsis there is. It marks a change. Like Britney Spears, it’s a life change.” He sighs. “If you’re thinking about parting with something, you should let it go.”

As far as where the two of them see Kississippi going, the excitement they share knows no limits. Zoe smiles. “Well, this is the one band I’ve been in where nothing’s wrong. We work so well together.”

Colin echoes her. “I like so many genres of music, but like, this is forever. This is the one thing, for me, that isn’t tumultuous in a scary world.”

You can download Kississippi’s EP on bandcamp here. Keep an eye out for their untitled 8 track coming out sometime in April; in the meantime, catch them play Tuesday, March 3 with Leaky Soups at Milhouse.