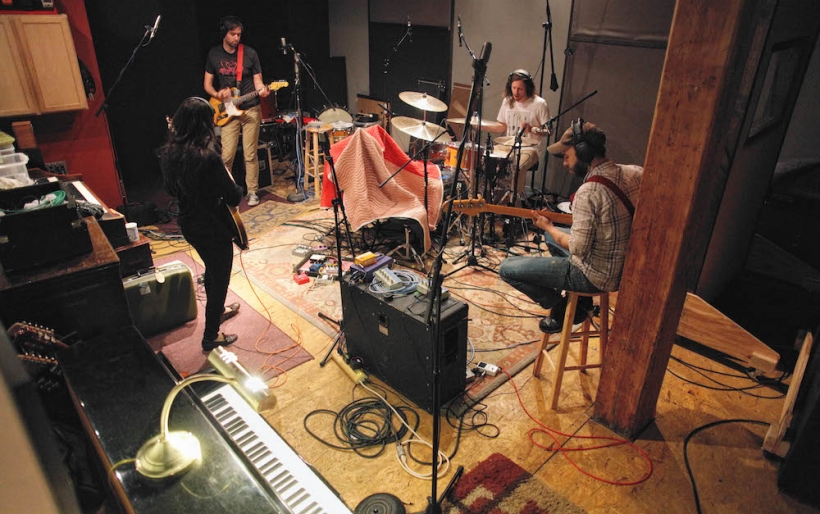 Hop Along in the studio | photo by Jonathan Minto

Hop Along makes a powerful statement with “Powerful Man”

Last week Hop Along premiered “Waitress,” the first single from their upcoming album Painted Shut, and it was an immediate favorite within the Philly scene and beyond. With open arms and honest lyricism comes the second single from Painted Shut, that delves into some darker subject matter.

In “Powerful Man,” singer / guitarist Frances Quinlan relates the personal struggle of witnessing a child being abused by his father and freezing up in the moment to take a stand. “He said ‘she’s not gonna help you,'” Quinlan sings on the refrain.

It is an issue that can feel all too familiar to people: witnessing an unfortunate situation and deciding whether or not to intervene. It can cause an internal crisis, which is exactly what Quinlan expresses. She told The Fader:

I was 18 and immediately afraid of this man; I didn’t confront him. I can’t imagine what it must be like for a little boy, watching someone walk away as his father punches him about the head. I witnessed a frightening part of myself that day: in a time of crisis I was not there for a child, I froze up. That little boy is probably close to 20 now, maybe a little younger.

The Philly band has an incredible ability to address such matters with gritty, honest lyricism; there is nothing to uncover beneath the barreling bassline, brisk guitar and barreling drums, it’s all there in the open.

Painted Shut is due out May 5 through Saddle Creek Records; be sure to catch them at Union Transfer with Thin Lips on May 9. Tickets and more information can be found here.