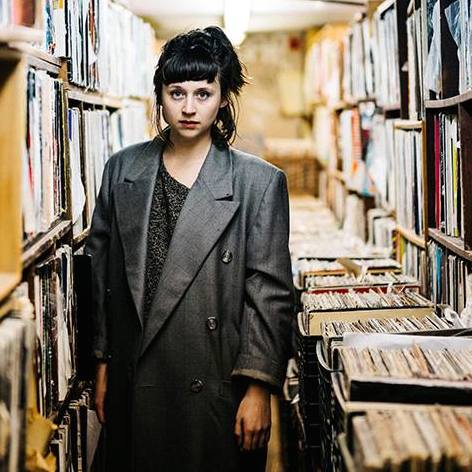 Next week, returning Philly resident Katie Crutchfield, aka Waxahatchee, will grace Union Transfer with a performance of songs from her highly anticipated third album Ivy Tripp, also arriving next week on Merge Records. In preparation for her sort-of homecoming, I gave Katie a ring to chat about the new album as well as her love for Philly, Jenny Lewis, and living with confidence and integrity as an artist.

The Key: So you’ve said in press materials that Ivy Tripp is about the idea of having control in overwhelming situations, as well as learning to feel and grow from those situations. Were there any particular life events that inspired this concept?

Katie Crutchfield: I feel like we all have those stressful and crazy moments in our lives, where everything sort of shifts. I feel like I’ve had a lot of those. My life has just really changed a lot over the last couple of years, so I feel like I’ve just had to adjust. I feel like I’m always adjusting and it (the idea of the album) really stems from that.

TK: Is there any particular advice you’d have for people in similar situations that came from that adjusting, or even just from recording the album?

KC: Just to be honest with yourself and to trust yourself. I think that just living with confidence has been something that I’ve been a big proponent of lately.

TK: Right on. In comparison to your past work, you have also said that you viewed this album as a gas whereas your previous album, Cerulean Salt, was more solid. What did you mean by that?

KC: I think that my previous two records are both very experience-based, lyrically. I think that they were written in moments of grief or stress and anxiety. They were about real experiences that I had and that I lived through. I feel like Ivy Tripp is more observation-based. It’s more sort of me reflecting on grander ideas that apply to the whole world, not just my own. The ideas take up a little more space than, like, someone just not texting me back and me being sad about it or something (laughs).

TK: Is it still hard to resist that urge to get upset when someone doesn’t reply to a text? I can totally relate to that.

TK: Speaking of taking up more space, you’re moving into bigger venues with this tour, headlining Union Transfer here in Philly. Has that shift shaped the way you’ll be performing?

KC: Well I haven’t done a ton of these venues yet, except for opening for people.  I haven’t played headline shows at really big venues ever, really. I’m a little nervous about it, but a lot of the venues are places that I have played shows at before. I mean I’ve been to Union Transfer a lot. I’ve seen shows there, seen a lot of friends’ bands play there, so I’m pretty comfortable there. It’ll be interesting. I’m looking forward to seeing how it goes.

TK: Of course, you played Union Transfer back in the fall. You opened for Jenny Lewis. Your love for her is very well documented. You even have a tattoo of the cover for Rilo Kiley’s The Execution of All Things. What was that experience like for you?

KC: It was wonderful! Jenny’s like a hero of mine. We got to do six shows together last year and it was just the best. She’s the best. She’s just like the coolest person on Earth so it was lovely.

TK: You’re also living back in Philly now. What brought you back?

KC: I just love it here. All of my friends are here. There’s great music here. I want to be on the East Coast and it was between here and New York, because that’s where a lot of my other friends and roots are. But New York is expensive and overwhelming, so Philly was the obvious choice for me right now.

TK: What would you say was different about making this record, your first for Merge, versus the other two on Don Giovanni? Also, how would you say your sound has evolved across all three records?

KC: Hmmm I don’t know. I feel like you can track my different musical interests pretty clearly throughout the records. A lot of the major differences for this record were the sonic choices, the studio choices, and the instrumental choices. Also, once I finish a record, I tend to move on really quickly to the next thing. I feel like that’s why you hear a leap between Cerulean Salt and Ivy Tripp. Not a huge difference, but a difference. Just because I was ready to move on. I feel like my next record will be totally different. I’m interested in following my interests and trying to challenge myself; just being present in that evolution and doing what feels natural rather than finding a sound and sticking with that sound. I’ve been in bands like that, and it’s fun. But I feel like that would put an expiration date on this project where there doesn’t need to be one. I want to have some freedom to try all of the things I want to try at my pace.

TK: It’s funny that you mention pace, because all things considered, you’ve been fairly prolific. Your first record as Waxahatchee (American Weekend) came out in 2012. Cerulean Salt followed the year after that.  Now Ivy Tripp comes two years after that. Factoring touring in on top of that, where do you find the time to steady yourself creatively and commit to the process of writing songs?

KC: Well up until last year, I hadn’t toured that much and this wasn’t my full-time gig. So I had tons of time before. Now it’s more of a challenge. I definitely see myself slowing down and taking more time. I usually have about a two-year turnaround between records. American Weekend, for example, I actually finished writing and recording at the beginning of 2011. I feel like I used to be really fast when I was younger. I would have a batch of new songs every couple of months. I’m getting older and more meticulous so I imagine I’ll slow down a little bit. It’s all part of the process.

TK: Something that has always struck me about your music in the live setting has been your tendency to play around with arrangements of older songs. You’ll really strip down songs from Cerulean Salt and beef up songs from American Weekend. Are there ever times where you prefer the reworked version?

KC: Yeah, I think that’s usually the idea. To get it to exactly where you want it in that moment. Also, all of my songs are simple and it’s easy to play them a million different ways. I think that’s something that I really like about them. I like to change it up and find new ways to play the songs on each tour. It’s funny because for this tour coming up, we haven’t really done much of that. We might try last minute to change a couple old songs around but we’re not doing a lot of that yet. We have thirteen new ones to play!

TK: Speaking of that, when you pick the songs for your albums, do they come from a bigger pool of songs or do you just go into the studio with the songs we see on the tracklist?

KC: Typically, my style is to go in with the exact number that’s going to be on the record.  But for this record, I have one leftover. It’s a song that’s good. It just didn’t fit. I couldn’t find a spot for it where everything else just fit perfectly in my mind. We’ll probably use it at some point though. You’ll hear it someday, I’m sure.

TK: Intriguing! I hope so. One final question: Is there a way that you hope people perceive you or perceive Waxahatchee as an entity?

KC: It’s funny. I try not to think about that. I feel like it would drive me crazy so I try to push away those thoughts. But… I guess I do my best to carefully make choices in my career, and I’m using air quotes when I say that (laughs). I try to be careful and thoughtful. I just want to have artistic integrity and make decisions that reflect that. I hope that’s how people see me. That’s how I see myself, which is the most important thing.

Waxahatchee plays Union Transfer on Wednesday, April 8th; tickets and information on the all ages show can be found at the XPN Concert Calendar.