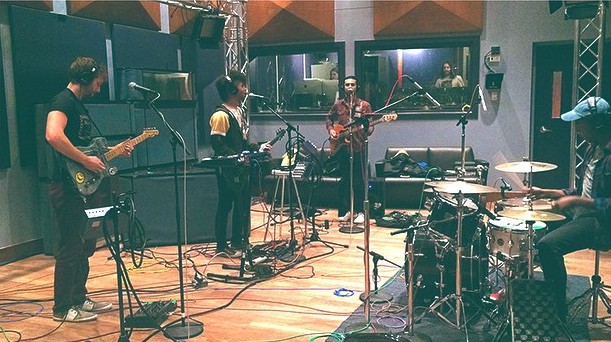 The Burgeoning | Photo by Brant Fuller

The Key Studio Sessions: The Burgeoning

Philly four-piece The Burgeoning has one leg firmly planted in the indie-dance nightclubs of the Making Time set, while the other one reaches ambitiously for the poppy world of arena rock. The band caught our ear last year with their debut single “Lighthouse” and a solid sonic recipe: tight playing, unique arrangements and big, big hooks. Quick points of reference would be Real Estate and Bastille. Since releasing their Love Alchemy, Life Algorithm EP, the band has been going hard on the Philly live music circuit, honing their craft, sharpening their form and whipping up an on-point cover of “Message In a Bottle” by The Police.

The cover appears in the band’s Key Studio Session, and as you’ll hear, it’s practically custom designed for frontman Logan Thierjung’s elastic voice. In addition to that wonderful 80s moment, and a solid delivery of “Lighthouse,” the band treated us to three new songs from their EP-in-progress. Like their previous standout single, “Beautiful Rampage” is a highly singalongable anthem, while “Cave Man” has an jaggedly funky guitar lead wed to a bouncing Bloc Party Beat. “Loud Dreams” drifts away in atmospheric bliss and digital vocal harmonics, and the whole set is a sweet cross section of what this band is capable. Catch it in person when The Burgeoning plays Bourbon and Branch on Monday, June 8th. Tickets and information on the show can be found at the XPN Concert Calendar. Below, stream their Key Studio Session and download it here via Soundcloud.