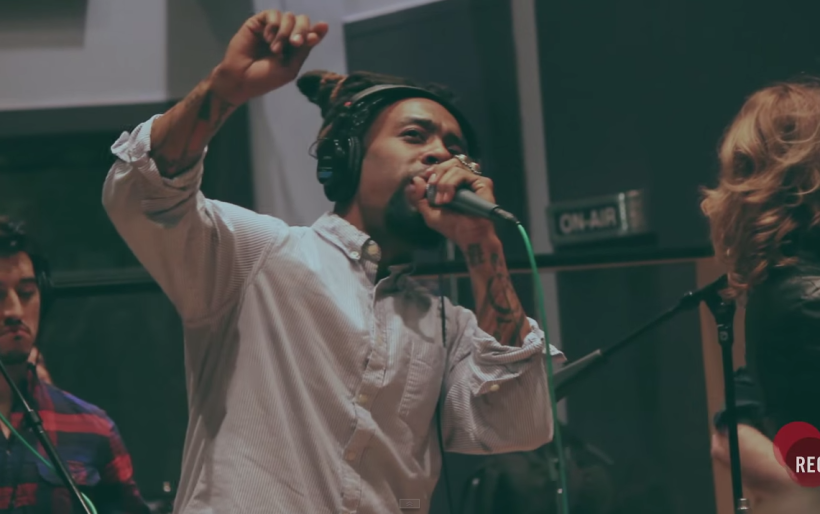 Kuf Knotz | Photo by Will Toms

Collaboration is the name of the game in this week’s Key Studio Session. For starters, it was our first collaboration with RECPhilly, the music community outreach arm of the emergent Recollective Records and the evolution of local promoters Broad Street Music Group. They were in the middle of their 30 for 30 free concert series during the month of April, and approached us about hosting a studio concert.

The stars aligned that Philly rapper Kuf Knotz, who just released his second solo LP A Positive Light, was slated to come in to record that month, and he is no stranger to playing to an audience of fans in our studio. With Kufie’s blessing, we opened his set up to a small crowd and paired him up with Patrick Donovan, a local dude with a soulful voice and a bunch of great pop songs in his back pocket. (“Clouds,” from his opening set, is a total winner that needs to get on Spotify so it can climb the digital charts).

During Donovan’s set, he brought out rapper E-Hos to spit a verse on “Going” – the two worked together on an EP in 2012 as well – and Hos reappeared spontaneously during the main set’s “Soul Music,” when Kuf put out a call to any MCs in the crowd to join him at the mic, cypher-style (rapper / producer Klass also joined them).

Kuf’s set was great, from Dana Alexandra‘s soaring voice on the hooks to his three-piece band – Adam Ahuja on bass and keys, Gavi Grodsky on guitar, Ry Pilla on drums – jamming things out and adding a vibrancy to the tracks completely unique from the way they sound on Positive Light. It’s like the songs exist in two different spaces, in an undeniably good way, and cuts like “Fluorescent High” and the title track sound expansive.

Adding one final element of collaboration to the mix – Kuf, Donovan and and Ahuja joined together for an unplanned encore, covering “Four Five Seconds,” by Rihanna, Kanye West and Paul McCartney. Check out RECPhilly’s videos of the session below, stream both sets and download them for free at WXPN’s Soundcloud page.