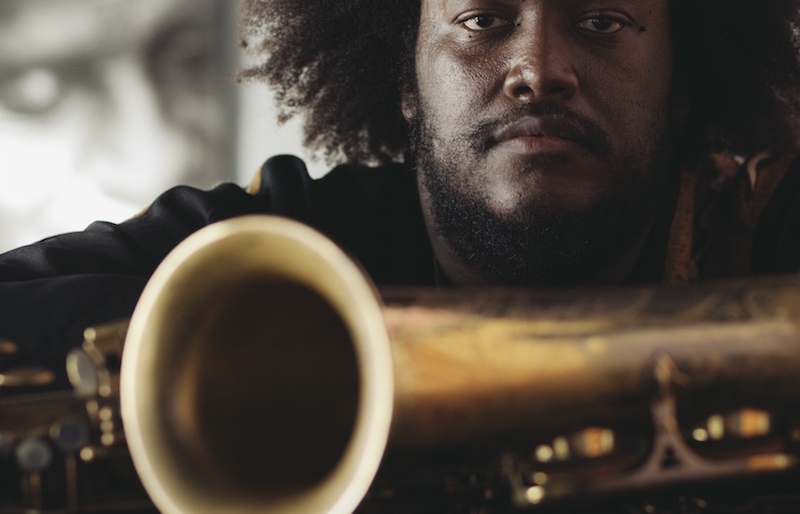 Kamasi Washington | Photo by Mike Park | courtesy of the artist

Interview: Kamasi Washington on breaking down the boundaries of jazz with The Epic

“West Coast Jazz” means something very specific to most listeners – cool, intellectual, played by guys in short sleeves and horn-rimmed glasses whose calmer brand of hip evoked a more laid-back atmosphere than the frantic pace of New York City. It’s an image, as that description implies, that’s not only reductive but locked in the 1950s, reflecting the eclipsing effect that New York has on other areas of the jazz landscape.

With the release of The Epic, Kamasi Washington explodes that image with the force of a supernova. The saxophonist/composer’s sprawling, monumental three-disc debut is an ambitious Afro-futurist opus that swirls in elements of jazz, funk, hip-hop, electronica and soul, as well as a 32-piece orchestra and 20-person choir supplementing the adventurous sound of his core ten-piece band. That band consists of fellow members of a collective known alternately as The West Coast Get Down or The Next Step, a group of like-minded, genre-leaping artists who grew up together in the Leimert Park section of South Central Los Angeles. Their combined efforts suggest something transformational happening in the incubator of the L.A. music scene.

“West coast jazz has been overlooked as far back as the ‘60s,” says Washington, whose father was a musician who he feels was unfairly ignored. “In a way it was cool that it wasn’t in the light because it got the chance to develop outside of the influences of the masses, but it’s also cool now that it’s getting some attention and giving hope to musicians who are coming up in L.A. Out here you really played jazz because you loved it. There wasn’t a clear lane for you to do something with it, even if you became the greatest musician in the world.”

The Epic places Washington, who’ll bring his uncategorizable sound to World Café Live on Thursday with an 8-piece version of his band, in alliance with stylistic alchemists like Flying Lotus (whose Brainfeeder label released the album) and Thundercat (who plays bass and whose relationship with Washington goes back to early childhood). Washington also collaborated with Lotus on the latter’s mind-blowing Cosmogramma and You’re Dead!, and played on and wrote arrangements for Kendrick Lamar’s To Pimp a Butterfly. All of these suggest a new wave of artists unconcerned with staying within the tight constraints of genre labels.

“People are starting to see a connection now,” Washington says. “They’re starting to realize that society’s overemphasis on the separation between genres – and people – aren’t real. The word ‘jazz’ and the word ‘hip-hop’ have a separation, but the music doesn’t really have that same separation. You can’t talk about hip-hop without talking about A Tribe Called Quest, and their music is inundated with jazz. You can’t talk about west coast hip-hop without talking about James Brown and Parliament.

“It’s a random occurrence that there’s a different name for funk than there is for what Miles Davis and John Coltrane were doing. Coltrane and Miles are more similar to Parliament and James Brown than they are to Jelly Roll Morton and King Oliver. The notion that there’s a line between them is imaginary more than it’s real. What’s happening now is that people are starting to ignore those imaginary lines and opening their minds to the realization that they were already into that music anyway; they just didn’t know it.”

Washington’s audacious debut is grabbing the attention of listeners across those boundaries and opening minds to the possibility of what jazz can be in the 21st century. And it’s only the tip of an iceberg that will continue to be revealed in the coming months: The Epic was recorded during a marathon 30-day recording session in 2011. Washington emerged with 45 songs, 17 of which comprise The Epic. In total, eight albums were recorded, all representing a collective sound, with one musical focus or another in the spotlight (in Washington’s case, jazz) but blending influences from all the others into the background.

“It’s not eight different versions of what I did,” Washington explains. “It’s eight completely different projects – you could almost call them different genres – but they have a connection. I grew up with a group of musicians, cultivating a sound for a long time, and each individual has their own version of that sound. They’ll give a pretty good representation of what’s going on in L.A. right now.”

Kamasi Washington performs at World Cafe Live on Thursday, August 27th; tickets and more information can be found at the XPN Concert Calendar.