Get on board with Gooch and the Motion's bluesy debut - WXPN 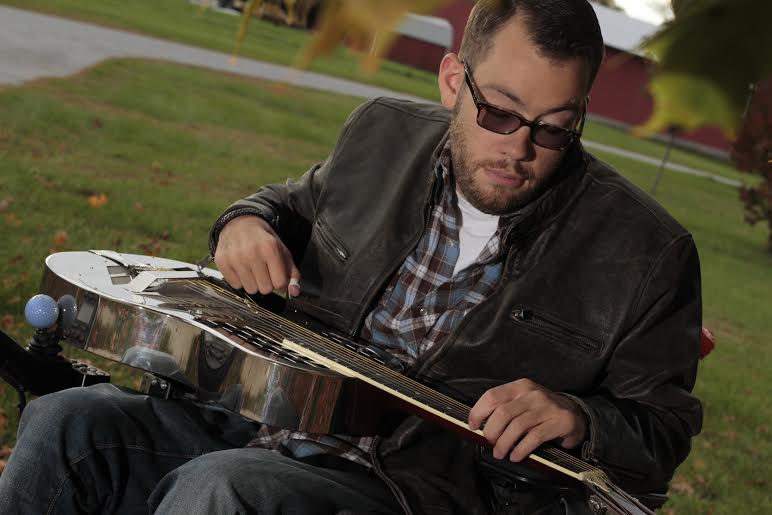 Gooch and the Motion / Photo courtesy of the artist.

Get on board with Gooch and the Motion’s bluesy debut

There’s always roadblocks on the way to success. Resources. Location. Scheduling conflicts. Through these trials, many artists still enjoy a degree of freedom in their ability to break off and let the music do the healing.

For Ryan “Gooch” Nelson, music was the only way to recover, but the ability to play remained just out of reach.

In 2004, Gooch (who was 18 years old at the time) was injured in an accident that left him a C7 quadriplegic, unable to move at all below his neck.

For someone who has been an avid musician nearly all his life with dreams of breaking big, Gooch felt restless without the freedom to create music. After months of rehabilitation picking up thimbles and pennies to regain control of his upper body movement, a friend turned Gooch onto playing glass slide guitar, which lent itself to following a more bluesy sound than the rock musician was used to. Ever the optimist, the former drummer and bassist pushed himself back into music after more than two years away, and is now embracing the journey it’s taken him on thus far.

After playing in the South-Jersey based projects 61 North and Reverb Brothers for a few years and experimenting with rap as Grady Lakeshore, Gooch has rounded up his own revolving cast of characters to be part  of The Motion, who are putting out Gooch’s debut solo effort, “Comin’ Home,” this fall via Blacbird Records.

Over the summer I got a chance to chat with Gooch a bit about plans for the album’s release.

The Key:So how long have you been playing music?

Ryan “Gooch” Nelson: I started when I was 12, and then I was injured when I was 18. So there was like a two-year gap where I couldn’t do music, and I was really depressed through all that and kind of found my way through this new way of playing… Before I was on bass and into drums – drums are like where my mind was at. I’m very rhythmic in my music and everything just starts with that rhythm. But now I play slide guitar, I play harmonica, beat box, rap…

TK: So you weren’t really interested in playing blues before you started playing slide guitar? Or were you mostly concentrating on a grittier rock sound?

GN: Well yeah, before I was injured and before I started playing slide guitar, I was really into Dave Matthews and John Mayer, a lot of older stuff. I was born in ‘85…when Dave Matthews started to get into his success, that was right about when I was getting into guitar, so I was very into the jam band scene and things like that.

TK: So when did you start to of form Gooch and the Motion?

GN: In 61 North we were all kind of wanting to go in one direction musically, and there were a lot of strong personalities – a lot of very creative people in that band. A lot of people were telling me that my deep voice was something special, that I should try to utilize it more and sing blues and everything like that..It was like, “you know what, I’m just gonna go out and see if I can do my own thing, put musicians that I hear as my sound behind me,” as opposed to staying in this thing that we all just kind of were in out of necessity, almost. 61 North was just because we were young and passionate about music, and now we spend so much time in the industry, we have all this knowledge and goals of mine, and know what my sound is. So about a year ago, I’d say, like last August or September, I decided to do this.

I never really thought people would want to hear my deep voice — I never thought of myself as a lead singer — but I got these two girls to sing backup for me, and electric instruments became more of an acoustic sound, and it just became a lot more rootsy, a lot more visceral, a lot more song-oriented. I think that’s what has kind of helped propel me this last year to getting signed and working with Joe Nicolo, a nine-time Grammy Award-winning producer, and doing this album and doing this project that way that I’m going about doing it.

TK: What has your relationship with Blacbird Records been like?

GN: It’s been great! We’re still putting a lot of the pieces together – [Nicolo] had a lot of very successful records in the 90s and early 2000s and ended up getting out of music and going into the movie world a little bit, producing movies and working on things like that. He’s now coming back around to doing music again and starting this record label, and I’m the first artist that he signed…It’s really exciting.

TK: Who are your bandmates?

GN: Well here’s the idea about that – the idea behind Gooch and the Motion is that the Motion is constantly changing. Josh [Dubois], Ricky Baldwin and Christine Monoforto – we’re all the vocalists and core members, and then there’s other members but they’re constantly changing, shifting… I’m very fortunate to have met several drummers, several bass players, several guitarists, musicians like that, so that it’s always Gooch and the Motion, whatever band built behind me is good. But the singers are absolutely like the hardcore central part of it. A lot of people know Luca Reilly, the keys player, just because he plays…with everybody. It’s a lot of different, like, musicians that have just been sessioning and working hard and are actually working musicians.

TK: Who can we expect to hear on the upcoming album? Gooch and the Motion | Photo courtesy of the artist

GN: You can hear Dave Uosikkinen from The Hooters, who is good friends with Joe and an amazing human being – he’s been such a motivating factor in my life, and he was part of the reason I got signed to Blacbird; I kind of walked into the garage with my guitar and there’s Dave Uosikkinen and Joe Butcher and they’re just like, “OK, play us something,” so I just, on the spot, closed my eyes and sang them something, and Dave, to his credit, saw the bigger picture. He could hear the bass, the drums…everything. Just from me playing guitar and singing, he could hear the pieces around. He could hear how the music could be produced. Yeah, him, Mitch Bier, who is a bass player, Annie Meyer, who’s a drummer, Butch Serianni, Scott Lynch…they’ll be on it.

TK: What has your feedback from audiences been like?

GN: It’s been very humbling and overwhelming, you know. Every time we put on a show and people come up to me and they go, “I love your voice,” and it’s very weird for me to hear that because I don’t even hit every note. It’s not perfect; I’m not a traditional, like, badass singer  – more like a Leonard Cohen, Dr. John kind of spoken word bluesy thing, and it’s very humbling for people to say that. And also there’s a side of it that, you know, I’m a cancer survivor; I was diagnosed with leukemia about 6 years ago – not a lot of people know that.

TK:How do you still find the time to dedicate so much of your life to music when you have PT and chemo, treatments, stuff like that? Are you in remission now?

GN: Yes, I am in remission. Every day is a struggle and it’s very difficult, but music, it’s like Bob Marley says: when it hits you feel no pain. When I’m up on there on stage performing, I don’t feel any of the pain. I feel nothing but pure joy, and it’s just – it’s humbling and it’s just a blessing from God that I look over and see people – these great musicians that I admire – and they’re looking to me to lead them and respecting my music and wanting to build around my sound. So I guess that’s what keeps me going, and I have a great team around me…it’s been truly humbling, I’ll say that much.

TK:Are there particular tracks from the album that you’re excited for people to hear?

GN: There’s a really soulful duet that I do called “Tonight I’m Lonely” about a relationship that I had with a girl, and it ended up falling apart like most relationships do when you’re a musician, but then they make great songs, right? There’s one called “Devil Don’t Bring Me Down” that is more about like my accident and the feeling of being so close to death, because when I had my accident, I died three times in the helicopter on the way to the hospital, and then I got freaking leukemia. Like, that doesn’t even make sense – who has all those things happen to them? You know what I mean?

TK: Most people would have just had this shut down outlook on things…

GN: My grandfather is a Korean war vet, and his outlook – I spent a lot of time with him, and he shapes a little bit of my personality. And my mother is unbelievable – she’s my caretaker, she’s my roadie, she’s my manager – she’s just awesome, super supportive. And just my team, you know, people who are around me, it’s like, you know, I see what me getting up and being positive and doing my music does for other people, and I see how it inspires them, and I realize that I have a responsibility to do that. I see a lot of people who are disabled who don’t have that outlook on life, and don’t have a lot of hope and positivity, and that’s the point of everything I do. I want to bring positivity and hopefully come to my show for a couple of hours and forget your problems, you know, it’s really cool, really inspiring.

TK: Do you have any connections or plans to do anything with a charity organization, from the proceeds of your album?

GN: I’m glad you asked because, in addition to all this that I’m doing, I plan to launch the Music In Motion Foundation. I want to help put on a few benefit concerts a year to raise money to help put instruments in schools, put music therapy in hospitals and just help any way we can – use those efforts to better people’s lives through music. My younger brother Mike is going to be the president of the foundation.

GN: My older brother, John – he does a lot to make sure that I get to the studio safe, and drives me around, and helps me do a lot of things – it’s just awesome having a team around you. I just want to focus on the music, because when I’m able to just get up and focus on music, and if everyone else does what they’re supposed to do, we can make this a profitable thing and something that helps people and something that inspires people, that’s fun for everybody to do. Like, who doesn’t want to be a part of something? That’s what Gooch and the Motion is about, that’s what the audience is even part of the Motion, like when I go to concerts and stuff, I tell the audience, “You’re the motion, there’s no concert without you.”