Minas celebrate the music of Antonio Carlos Jobim at WCL 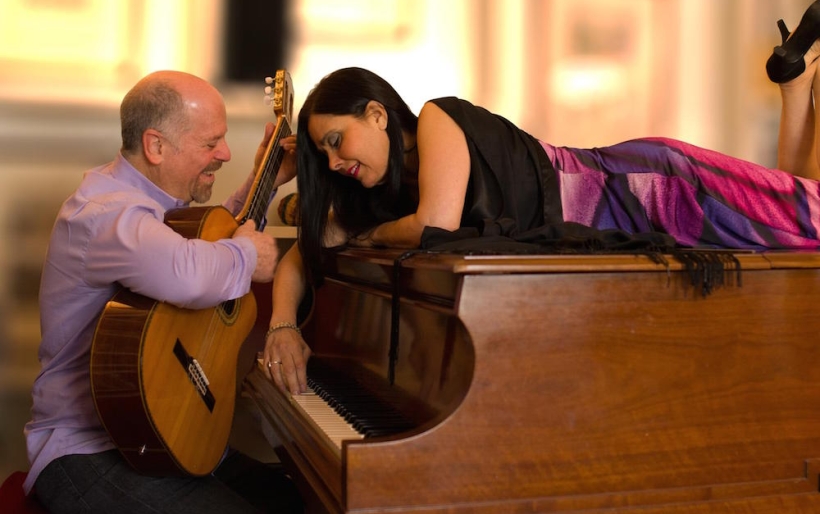 Minas | photo courtesy of the artist

Orlando Haddad is a native Brazilian who came of age in Rio de Janeiro, surrounded by the culture that gave birth to the bossa nova. But he was interested in the progressive jazz fusion of the day rather than the music of his homeland, more attuned to the sounds of Chick Corea than of Antonio Carlos Jobim. At that time, bossa nova felt to him like “home-cooked food that you eat all the time. You want to experience something different.”

It took meeting an Italian-American woman with a passion for Brazilian music to reorient Haddad toward the music he’d grown up with. Patricia King was born in Denver and raised in Carlisle, PA, where she fell in love with sound of AM radio hits like “The Girl From Ipanema” and the songs of Sérgio Mendes’ Brazil ’66. “I thought it was the most romantic music I’d ever heard,” King recalls. “I was very drawn to it from an early age.”

The two met at the very un-Brazilian University of North Carolina, where both were students. King heard Haddad playing modern jazz guitar and asked if he knew any bossa nova. Their fates were sealed from that moment on – they’ve been a couple both personally and professionally, co-leading the bossa jazz band Minas for more than 30 years.

“I was going through a lot of searching at that time,” Haddad explains. Meeting King was “a wake-up call to go back to my roots. I realized this music has such significance, so I started researching my roots and seeing the beauty in this music. Bossa nova is not easy music to play. It’s taken a lifetime to get anywhere close to mastering it.”

Haddad and King arrived in Philly in 1984 and soon became the house band at the upscale Broad Street restaurant Apropos. During their six-year tenure at the eatery the duo crossed paths with countless members of the city’s jazz scene, including local jazz great John Swana and bassist Gerald Veasley. Jazz and bossa nova are inextricably intertwined; it was a fusion of jazz and samba that gave birth to the genre, which was then adopted by American artists like Stan Getz and Clare Fischer.

“We were the only people doing Brazilian bossa nova in this area,” Haddad recalls. “So many people who are in the jazz scene loved this music, so they welcomed the chance to play it with the authentic approach.”

Minas will present a program of the songs of Antonio Carlos Jobim, one of the music’s founders and undoubtedly its best known composer, at World Café Live this Saturday, November 7th. Much of the material for the show will draw on songs recorded on the band’s most recent release, Symphony in Bossa, which featured orchestral arrangements of pieces by Jobim and originals by Minas. This performance will pare the band back to a quintet formation, featuring Swana on valve trombone and EVI, bassist Jim Stager, and drummer Tom Cohen.

Like the CD, their World Café Live show will include some of Jobim’s best-known songs, including “The Girl From Ipanema,” “Quiet Nights (Corcovado),” and “Desafinado,” along with several more obscure tunes from the composer’s pen.

Symphony in Bossa was born from Minas’ relationship with the late Bill Zaccagni, who was a colleague of Haddad’s on the faculty of the University of the Arts. When they’d cross paths in the hallways or elevators, they’d frequently fantasize about pairing Zaccagni’s student big band with Minas’ Brazilian sounds. That dream became reality in 2004 when they performed Zaccagni’s string-drenched arrangements at the Merriam Theater. He passed away in 2007, but his charts were finally realized earlier this year after a ten-year effort with the help of grants, a Kickstarter campaign, and old-fashioned gig fund-raising. The result, Minas’ 6th CD, is now up for four Grammy Award nominations, including Best Latin Jazz Album.

Haddad and King return to Brazil once a twice a year to absorb the ever-changing sounds in the country. These days, the local music tends more toward hip-hop and pop, but the couple haunt record and music stores and concert venues to discover what they can. “What I really love about the music isthat it’s very rich – harmonically, rhythmically, melodically, lyrically – and it’s very organic in the sense that people are very socially involved with it,” King says. “It’s very much a part of their lives. It’s in the streets, at concerts people sing along with the artists. I really like the sense that it’s not just about sitting, watching and listening, but it’s very much woven into their culture. You can feel it when you’re down there. It’s in the pulse of life.”