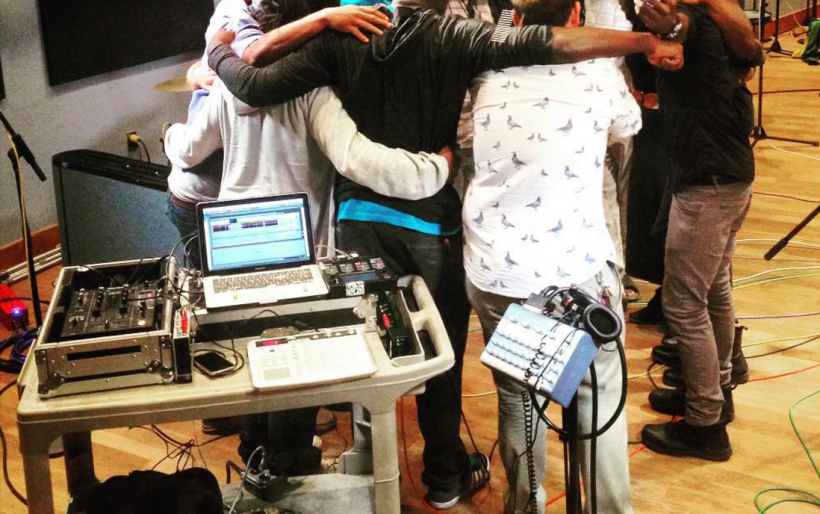 Photo by John Vettese for WXPN

By John Vettese
November 06, 2015
10:11 AM
Share
Worldtown Soundsystem in the WXPN Studio | Photo courtesy of the artist

We’ve recorded hundreds of Philly musicians for The Key Studio sessions over the past five years. A span of genres. Bands made up of old friends and family members as readily as bands who met online. Nevertheless, with everything under our belt, Philly’s Worldtown Soundsystem – which has been operating out of Fishtown’s Boom Room Studios for a few years now – managed to nab two firsts in their appearance this week. They were the first band to record their session as a conceptual, twenty-minute megamix themed around global travel. Which makes sense; they’re a 10-piece crew rooted in house music but incorporating live instrumentation and songwriting flourishes from South American, Eastern European and African traditions. It all comes together in an uplifting, body-moving whole – from the opening sprint of “Testify” to the joyous anthem “The Banquet” and the deep and dark closer “Leaning on a Feeling.” And they’re also the first group to go in for a huddle, a group hug, maybe a prayer, before recording began. They then set up behind their instruments and drummer / band leader Gary Dann told his mates “I love you guys.” Like I said, I’ve recorded actual families before, and they didn’t feel like this much of a family. Worldtown’s positivity is contagious and inspiring; get a taste in the Key Session below, presents as intended as a continuous mix, and keep tabs on their Facebook page for information about upcoming Worldtown parties.

Songs performed:
Testify
The Hustler
The Banquet
One Night
Leaning on a Feeling