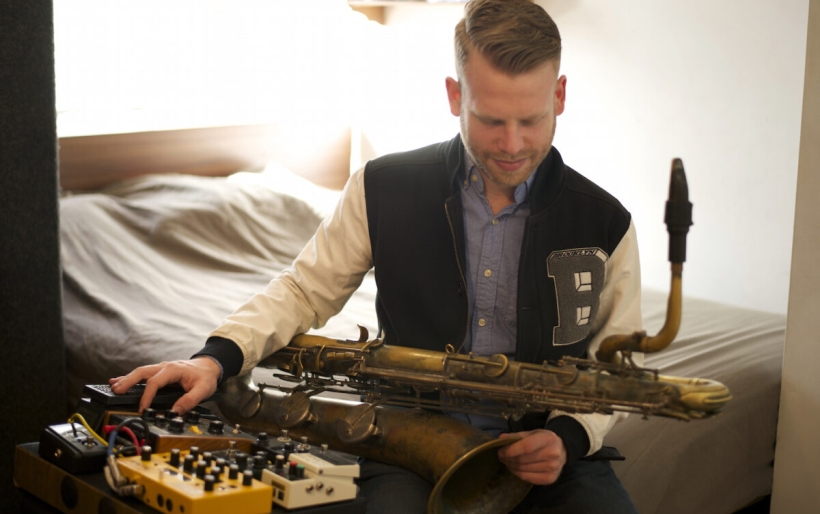 Jonah Parzen-Johnson brings stories of the road to Rigby Mansion

As we’ve all learned from countless listens to “Turn the Page” or “Faithfully,” life on the road can be lonely. But at least Bob Seger had his Silver Bullet Band, and Steve Perry (or his Filipino doppelganger, depending on when you’re listening) had his Journey-mates.

When Jonah Parzen-Johnson tours the country, it’s just him, his baritone sax, and an analog synth. His music for this uncommon combination – most recently represented by the captivating and haunting Remember When Things Were Better Tomorrow – captures its own sense of solitude. Occupying a nether region somewhere between high lonesome lament and David Lynchian surrealist noir, his music distorts Appalachian folk melodies through the distorted lens of experimental electronic drones.

His most recent project, though, paints a friendlier picture of music-driven travels. Three Reasons To Live Here, which will be on the merch table alongside his CDs when Parzen-Johnson plays the Rigby Mansion in Germantown on Saturday, is a slim paperback travelogue combining photos and memories from his treks. Each page pairs a single image with three selling points for each of 34 North American cities that the saxophonist has visited. P

hilly’s entry features a shot of the leprechaun-toting sign for Les-n-Doreen’s Happy Tap in Port Richmond alongside plaudits for being more livable than nearby New York, the availability of takeout beer in “any” bar (a bit of an overstatement, but chalk that up to a necessarily small sample size), and, of course, sandwiches. It’s been five months since Parzen-Johnson’s last visit, so show up at the Rigby and give him a few more reasons to sing our city’s praises. More information on the show can be found at its Facebook event page.