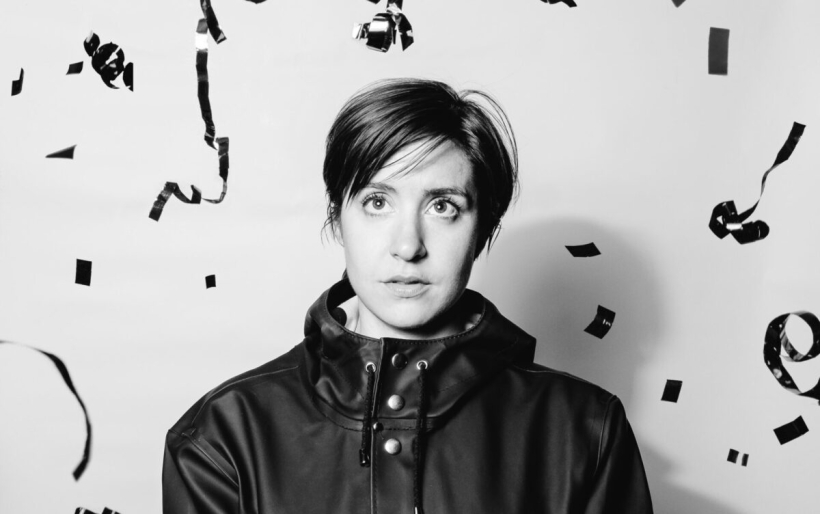 Laura Stevenson | Photo by Christopher Hainey | courtesy of the artist

Getting cocky with Laura Stevenson

Laura Stevenson | Photo by Christopher Hainey | courtesy of the artistEarlier this fall, Laura Stevenson released her fantastic, fourth solo album Cocksure through Don Giovanni Records. Punkier, perkier, and poppier than anything she’s ever done, it marks both a natural progression from and stark contrast to her previous efforts. In preparation for her upcoming stop at The Foundry at The Fillmore to debut the album live, I caught up with Stevenson to discuss the making of the record, how to stay sane on the road, and her memorable first experience playing in Philly…

The Key: How did making this record compare to the previous records? How did it feel?

Laura Stevenson: I had a lot more fun making this record. Making records is weird. I was talking with my friend Jeff (Rosenstock) the other day about it, and it’s true. You play, you tour so much, playing so, so many shows, and you only record once every two years, or once every year. It’s just like a week out of your life, so it’s a weird process.

But now that this is my fourth time around doing it, I kind of knew what I was looking for in terms of the types of people that I wanted to do it with, and where I wanted to do it. I wanted to change the vibe. We had done it before with Kevin McMahon, who produced Wheel, and we were thinking about doing it again at his studio. Then I was like “I really think my friend Jeff is the one we should be working with on this record. I really wanted to make a different record and I wanted to do it with people I’ve known for years. You know, Kevin’s great. I just thought that Jeff could really handle this record.

We ended up doing it in Brooklyn. It was just a really positive experience and I didn’t feel bad at all. I usually end up feeling really bad about myself, and there’s still a little bit of that. But this time it was more like “We’re a good band. We’re just going to play and document what we sound like and not do anything fancy.” It was a lot of fun.

TK: It’s funny how you mentioned feeling bad after making the previous records because you named this one Cocksure. It’s also ironic given the content of the album, which is somewhat self-deprecating. Is that what you think of when you think of the term?

LS: Absolutely. When you see someone who’s walking around like they’re king of the world, they’re usually feeling the worst out of anybody. I was just kind of playing with all of those ideas and this super confident, rock and roll record, even though it does have songs about insecurities. I just thought it was the perfect name for it.

I’m really happy with record too. Usually I’m a crazy person about the records I make. Every time I listen to this, I’m glad that we did it. I don’t have any notes or want to go back and change anything.

TK: Have you had those kinds of notes in the past?

LS: Oh yeah. My voice is always something that drives me insane. When I try to sound powerful, sometimes it just sounds really bratty. When I’m giving it my all, and I’m putting so much energy behind my voice, it has this bratty quality to it, which is annoying to me. Listening to it is sometimes crazy, but I just decided it was the only way I could do those songs. At the end of the day, I’m going to sound how I’m going to sound.

TK: I think stuff like that about my voice all the time. I don’t think anyone’s ever fully comfortable with their voice.

LS: No, nobody is. If people are, they’re very, very lucky. Right now, I have this vocal polyp, which is kind of troubling. I think that is what made me throw all of the quiet songs away for this record. I mean sonically, I wanted a change, but I was also very frustrated with myself and my voice. I’ve lost the majority of my head voice. I don’t really have a falsetto anymore so I figured I’d just go all out and sing as hard as I can. I have a surgery coming up though, so after that I’ll probably be more comfortable with my voice. 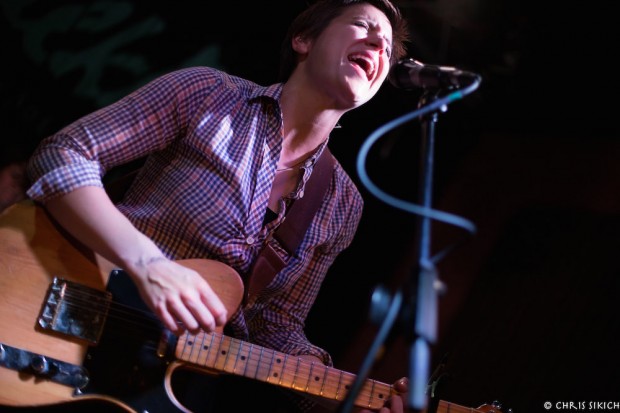 TK: You cite a lot of great influences on this record in the press release: The Lemonheads, Liz Phair, The Replacements. Are there any influences on you and your sound that might surprise people?

LS: My influences and writing are so all over the place. I think the weirdest thing that I listen to is Mclusky. It would be weird to think that I would have that as an influence, but just energy-wise. They’re crazy, erratic, kind of ugly at times but always super catchy. Everything else is pretty normal. I like Fugazi, but I don’t sing like Ian MacKaye. Although that would be interesting!

TK: You mentioned not using your head voice and going harder on this record. Do you feel like doing that with the harder, punkier rock riffs helped convey the meaning of the songs better?

LS: I think so. I was kind of experimenting with weirdo chord changes. Every song starts with just me and an acoustic guitar, so it has the potential to be just a folk song. These songs I just felt needed a natural energy with the drums and the distorted guitars. You can just hear it when you’re writing it, like the second to last song on the record, “Life Is Long.” I wrote that song a really long time ago and I originally just recorded it on just a guitar. It’s the same song now. Every part is exactly the same, but in the acoustic version, you can just hear where the drums and the bass should go. You just know what songs need what, and all of those songs needed energy and other people because they weren’t so lonely. I have a lot of lonely songs, but these are songs that you can play with friends.

TK: I think you have a real gift for making that songs that can be lonely in content, but aren’t sad or lonely to listen to.

LS: Thank you. Ultimately, the thing that spurs me on and keeps me going and touring is when other people can connect to the way that I felt in the moment. It’s a selfish thing for me in a way because I like when other people tell me after a show that they’ve felt the same way. If someone can find some peace and feel less alone listening to it, it’s a good thing. Everybody wins.

TK: How has performing this album live been so far?

LS: It’s been really fun. We have been really missing our drummer, Sammy, who played on the record. She’s been sick, but she’s home getting better, stronger. We’ve been sending her pictures every day.

The songs have been super fun though. They have a lot of energy. The crowds are really into it. I usually keep my eyes closed on stage a lot of the time, but I’ll open them on a sound like “Claustrophobe” and see people softly head banging. I don’t think we’ve ever had a song that grooved quite like that before. You can see people physically experiencing it, which is different from a lot of the songs we’ve played before. Hopefully when Sammy’s [back], heads will be banging a little harder.

TK: You mentioned pictures. I’ve been perusing your Instagram. It’s a really entertaining mix of stuff. What constitutes an Instagrammable moment for you?

LS: I actually like to Google image search things that I think are fun, like dogs riding bicycles in sunglasses. I have five pages open in Google Chrome right now that are just dogs on bikes and skateboards. I’m a very strange person but that’s what brings me joy.

In life, I can take pictures of things that are beautiful or ridiculous. Everything is hilarious when you’re on tour and kind of delirious.

TK: What anchors you during that delirium when you’re just out on the road for long spans of time?

LS: I text my family to try and get some perspective outside of the van. My band members are my best friends, of course. I’m actually marrying my bass player. But it’s nice to reach out to people in the outside world when we’re all on top of each other on the road.

TK: Do you watch, read or listen to anything on the road?

TK: Oh good! We agree on when that era was!

LS: Alex, our accordion player is like an encyclopedic fan who has memorized every episode. We just put it on and it’s like comfort food. We also listen to a lot of podcasts, WTF, Comedy Bang Bang, this new one Mystery Show. We try to keep it light.

LS: We’ve played in Philly a lot. Philly was our first out-of-state show ever. We played in a basement. We jumped on to a show where Future Islands was playing. Now of course they’re a huge band.

It was random because we were supposed to play at this place with people who are friends with The Menzingers. Their buddy had this house called Titan House. It was like a punk house. I still give him shit for this, because we’re friends now but he was a stranger to me then. We showed up and we were so excited because it was our first show out of New York. He said, “Oh shit, yeah, the show was cancelled.”

So after that we called a bunch of people and finally found people who were in town at the same time. There was this show in West Philly in a basement, and Future Islands was playing. At this point, I’d never heard of them, and it was fucking crazy. It was small show in a weird space and it was really powerful. They were so intense. It was really cool and that was our first Philly show.

TK: That’s a wild memory! In the time since then, over the course of all of your albums and touring, what’s one key thing you have learned about yourself?

LS: That what I’m doing is worthwhile to some people. It doesn’t have to be “cool” or universally liked. For the people it does connect with, it really resonates and helps. It’s small but it’s something that I can do. I remind myself of that everyday.

Laura Stevenson performs at The Foundry at The Fillmore Philadelphia on Wednesday, November 18th with Matt Pond PA. Tickets and more information can be found at the XPN Concert Calendar.