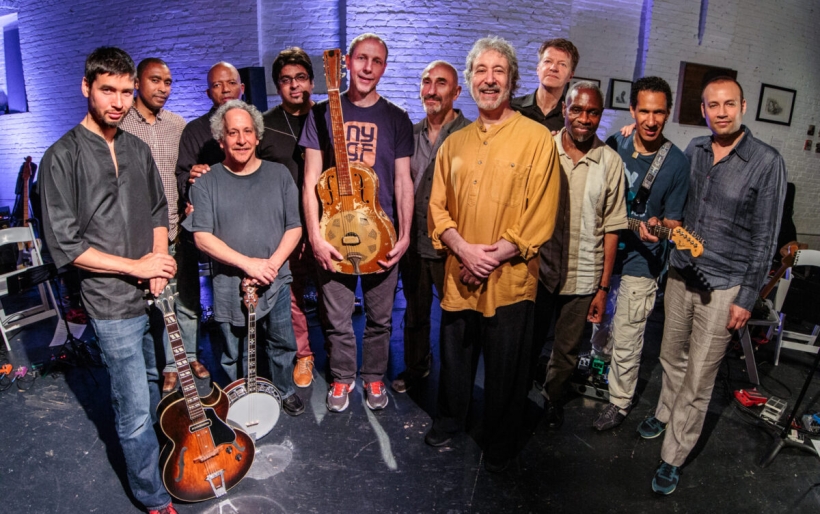 Put ten of the world’s greatest guitarists together on one stage, and what do you get? Not what you might expect in the case of Adam Rudolph’s Go: Organic Guitar Orchestra, which will perform at FringeArts on Sunday, presented by Ars Nova Workshop. Guided by the percussionist/composer’s conducted improvisation techniques, what could be an unruly eruption of six-string pyrotechnics becomes a unified ensemble exploring a wide range of textures, colors, and combinations.

“Since guitar players have all these foot pedals and sound processing and can sound like so many different things, I thought we could really make it sound like a futuristic orchestra,” says Rudolph. “All these players are phenomenal guitarists, but it’s serving a bigger orchestral palette and a bigger sentiment about what we’re expressing. That’s why it’s successful for me as a composer.”

The line-up for Sunday’s show is only slightly altered from the 11-piece group that recorded the Orchestra’s recently-released debut CD, Turning Towards the Light (Cuneiform). It will feature Wilco guitarist and veteran experimentalist Nels Cline; past and current Steve Coleman sidemen David Gilmore and Miles Okazaki; Bronx-born, African-inspired Damon Banks; adventurous Italian guitarist Marco Cappelli; Liberty Ellman of Henry Threadgill’s uncategorizable Zooid; Joel Harrison, who has stirred everything from country to Indian music into his sound; longtime Sonny Rollins sideman Jerome Harris; “future-folk” axeman Brandon Ross; and the versatile Kenny Wessel, who worked for more than a decade with the late Ornette Coleman.

The ensemble is an outgrowth of Rudolph’s long-running Go: Organic Orchestra, the first incarnation of which was founded in Venice, California, in 2000. He now has ongoing versions of the Orchestra in L.A., New York, and Austin, Texas, and regularly assembles new versions in cities around the world, as he did last weekend in Chicago. (He toyed with the idea of a Philadelphia chapter during our interview.)

The band creates completely improvised music based on a three-page score composed of interval matrices and cosmograms conducted by the composer. Each of them has a particular feeling, which Rudolph likens to the different aesthetics associated with Indian ragas. He cues the instrumentalists to move in and out of these matrices with hand signals, making each performance an entirely new creation. The Guitar Orchestra works from the exact same score, but the results are markedly different.

“The palette is less broad in some ways and more broad in other ways,” Rudolph muses. “In the Go: Organic Orchestra, if I cue the flute section there’s some serendipity about what I’m going to hear back, but I know I’m going to hear flutes. In this case, a lot of the guitarists are using very interesting processing, so a lot of times I don’t know exactly what I’ll get.”

That embrace of the unexpected has been a key component of Rudolph’s career since its beginnings in Chicago more than four decades ago. Now recognized as a master hand drummer and percussionist and as an innovator of the fusion of jazz and music traditions from around the world, he’s forged meaningful musical relationships with such legends as Don Cherry, Yusef Lateef, Bill Laswell, and Pharoah Sanders.

Rhythm has been a core element of Rudolph’s music, focused on an approach he refers to as “ostinatos of circularity.” While the Go: Organic Orchestra typically features percussionists as part of the ensemble, the all-guitar variation would seem to move the composer away from his area of expertise. But he found the musicians in the band to be more adept at his rhythmic approach than he might have expected.

“Sooner or later, most guitar players will find themselves playin in a rock n’ roll band or blues band or reggae band where they’re playing what they call rhythm guitar,” he explains. “You’ve got to know how to lay down a groove. So almost by definition they’re all pretty savvy about that. All of them are pretty advanced rhythm players, and I’m very excited about these concerts because I have a lot of new ideas that we’re going to be exploring.”

Turning Towards the Light, which was recorded last December during the winter solstice, finds vast possibilities in the amassing of players of a single instrument – one that the composer doesn’t play himself. At times, a piece may embrace an archetypal guitar style – down-home blues here, heavy rock riff there – but just as often the sounds are nearly unrecognizable as emanating from a guitar, and the various players meld into a single texture or fragment into strange digressions.

“Each one of these matrices has its own aesthetic and coloration and feeling,” Rudolph explains, “but I let everybody bring their own approach to how they interpret those materials. I encourage them to go to the extremes; I want them to not think like guitarists. Think like a violin or an oboe or a bird or a samba dancer, but really extend your sound palette. That’s the only real direction I give them. Like in all my projects, it’s the ultimate holding of opposites: I want the musicians to have as much freedom as possible but still have the most intense aesthetic focus possible at the same time.”