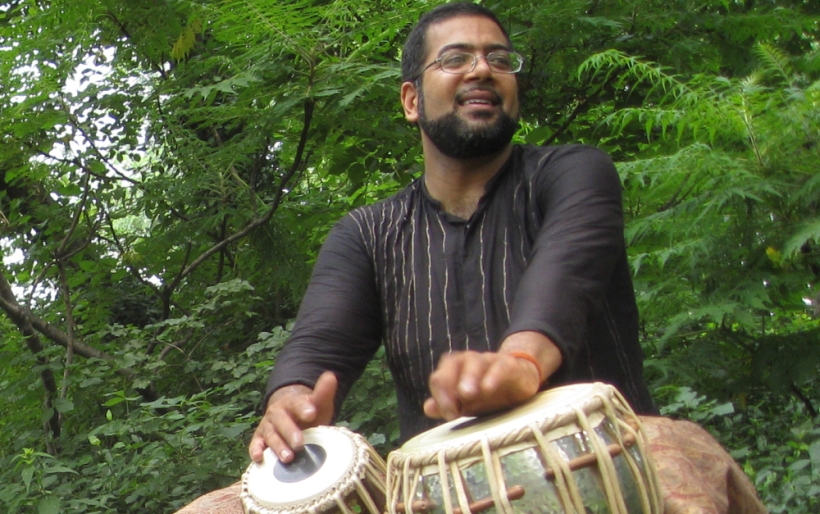 Upward, the new duo album by 12-string guitarist Ross Hammond and tabla player Sameer Gupta, isn’t a coming together so much as a circling back. The two men both grew up in California, where their first collaboration was in their mid-90s college years when they were part of what Hammond describes as “a very electric, groovy jazz group.”

At the time, Hammond was focused on electric guitar and Gupta was solely a drum kit player. It was only in the intervening years, after Gupta relocated to Brooklyn, that both embarked on separate but parallel paths to discover their roots. For Hammond, that meant the country blues and Appalachian folk music of his native Kentucky; for Gupta, it entailed a look even further back into his heritage with an immersion into North Indian classical music and the tabla. So despite the lineages of each instrument, the only “east meets west” going on in Hammond and Gupta’s collaboration is between coasts. “In previous generations it’s been like two sides of the ocean – in a very literal sense – getting to know each other,” says Gupta regarding cross-cultural collaborations like guitarist John McLaughlin’s Shakti. “That music is brilliant, but it’s also very much two musical worlds meeting with the excitement of these musicians who represent these heritages coming together. What’s different here is that Ross and I both grew up hearing and appreciating both of these styles of music. I listened to tons of blues music and avant-garde jazz, so once we sit down and play we’re drawing on that, too. We’re meeting in the middle.”

What’s remarkable about the almost wholly improvised Upward is how well these instruments work together. Both Hammond’s 12-string and Gupta’s tabla share a resonant, singing quality, an ability to slide between the melodic and the percussive, and a slippery malleability.

“The cool thing about the tabla is that there are all these different rhythms happening at the same time,” Hammond says. “But there’s also a melodic element, so you can improvise with both. Then there are so many layers and overtones in a 12-tone acoustic, so the timbre of the two instruments together – I can’t believe more people don’t do it.”

Hammond started playing the guitar at age 12, originally focused on rock and soul music. It wasn’t until college that he discovered jazz, but he was then ideally situated to plug into the eclectic Bay Area jazz scene of the time. He’s since helped build a dedicated musical community in Sacramento, and formed important collaborations with the likes of multi-reedist Vinny Golia, drummer Scott Amendola, and Philly’s own G. Calvin Weston.

Since beginning his tabla studies in 2002, Gupta has split his time between jazz drumming and tabla playing. He is a member of keyboardist Marc Cary’s renowned Focus Trio and works regularly with Indian classical violinist Arun Ramamurthy and sitarist Neel Murgai. Along with Murgai, he’s also one of the co-founders of Brooklyn Raga Massive, a nonprofit and collective dedicated to promoting forward-thinking musicians inspired by Indian classical music.

Upward marks the first time that Hammond and Gupta have recorded together in nearly 20 years, a lifetime as far as musical evolution is concerned. “I think that journey is interesting because we both returned to acoustic instruments that represent a heritage,” Gupta says. “These are sounds and musical forms that have come down from many generations, from the blues and spiritual music that Ross is tapping into and the Indian classical music that I’m tapping into.”

But more important to the collaboration than these cultural trappings, Hammond insists, is the personal relationship that the two share. While their geographical separation has kept them from significant musical interaction over the years, they’ve remained friends and shared life experiences; both pointed out that they each have young daughters close to the same age.

“You can talk about conceptual things,” Hammond shrugs, “but when it all boils down, making music with someone you really care about, at all ages and all levels that’s still the best.”

Fire Museum presents Ross Hammond and Sameer Gupta at the House Gallery 1816 in Fishtown on March 24th. Tickets and information can be found here.