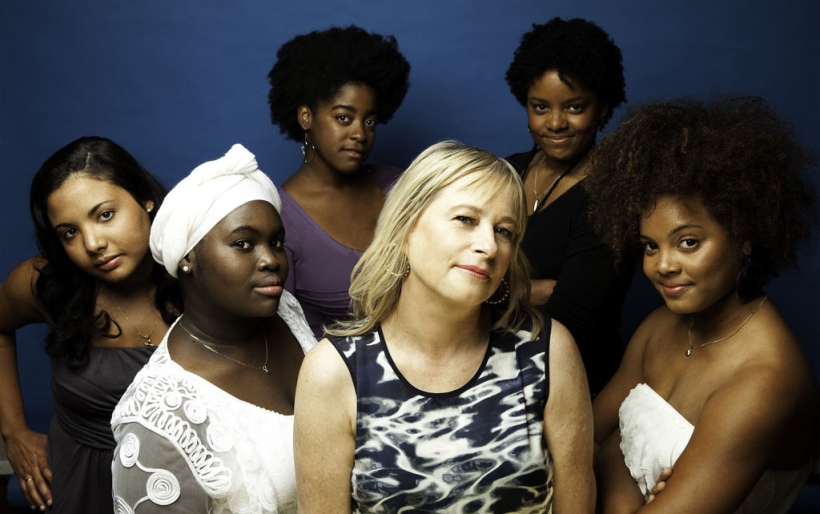 Jane Bunnett and Maqueque | photo courtesy of the artist

Yes, the president’s recent visit to Havana portends new opportunities for the relationship between the U.S. and Cuba. But don’t jump the gun just yet and assume that historic rapprochement has trickled down to affect artists like Jane Bunnett, who has spent the last 30 years traveling from Canada to Cuba and attempting to bring the resultant cross-cultural musical collaborations into the States.

“If one more person comes up to me and says, ‘It must be easier now that Obama went to Cuba…’” Bunnett trailed off, but the frustration in her voice revealed the challenges that the saxophonist/flautist continues to face in crossing our northern border with her Cuban collaborators. When we spoke last Thursday morning, Bunnett was scheduled to head into the studio that afternoon to start recording the second album by her all-female ensemble Maqueque, in which she’s joined by seven young women (all still in their early 20s) that Bunnett and husband/trumpeter Larry Cramer discovered during their travels to the island.

Instead, she found herself scrambling to deal with a series of visa-related catch-22s related to their impending return to the U.S., which will (if all goes well) bring them to the Painted Bride on Friday. She discussed the headaches she was facing with the air of someone who’s no less annoyed by the hurdles she had to conquer just because she was used to them, but confident that they would once again be overcome in time to take the stage.

In the meantime, Bunnett is living in a Toronto house suddenly enlivened by seven young Cuban musicians, excited at the opportunity to play music all day but perhaps even more thrilled by the unfettered access to wi-fi. “These girls are just addicted to their iPhones,” Bunnett said with a laugh. “When they go back to Cuba they’re really limited. I’ve also been taking them to the [Canadian dollar store chain] Dollarama, where you can get awesome things for a dollar. We make jokes about it being the ‘Dalai Rama.’”

Since the release of Maqueque’s self-titled debut in 2014, Bunnett has taken her protégés on a number of world tours, transforming a mentorship relationship more and more into a group identity. Each of the band’s members – percussionists Magdelys Savigne and Melvis Santa, drummer Yissy García, pianist Dánae Olano, bassist Célia Jiménez, vocalist Daymé Arocena, and their newest addition, violinist Elizabeth Rodriguez – is contributing material to the new recording, and Bunnett is happy to cede some of the compositional spotlight.

“Everybody’s champing at the bit to have a tune or two on the recording,” she says. “I wanted the group to be a forum for that kind of creativity. They’re all still very young women, so as individuals they’ve grown very rapidly and their skills on their instruments have developed even more. It seems like they’ve been going through growth spurts.”

That’s a tantalizing prospect for the music given how incredibly the group sparked on their inaugural outing. Maqueque brims with spirited emotion and intricate communication, melding lively Afro-Cuban rhythms with soulful singing and playing. A captivating rendition of Bill Withers’ classic “Ain’t No Sunshine,” highlighted by Magdelys Savigne’s throaty vocals, fits surprisingly well alongside by Bunnett’s compositions, which marry raucous percussion with modern jazz complexity and classical flourishes.

Maqueque, which translates to “the spirit of a young girl” in the Yorùbá religion, was born out of a disconnect that Bunnett noticed during her frequent travels to Cuba. In the country’s music conservatories it seemed that three-quarters of the students were female, but at the jam sessions at night the stages were dominated by men while, she says, “the young girls I had seen at the schools would just be sitting on the sidelines, happy to watch their boyfriends up there playing.”

Bunnett wasn’t on a crusade to remedy that situation until a chance encounter with Arocena. “She has this very old soul voice for this very young person,” Bunnett says. “Her voice didn’t really fit her age; it was really unusual and she was very powerful. From there she and Cramer set out to discover more emerging talent with Arocena’s help.

While she’s enjoying ushering these eager young artists to new experiences, Bunnett will also be reuniting later this with some of the Cuban legends whom she first worked with on her landmark 1991 album Spirits of Havana. To celebrate the CD’s 25th anniversary, she’ll release a new two-disc version and perform with some of the musicians she first played with when she was in search of mentorship herself. For the moment, however, she’s happy to be “the old lady in the group.

“I really feel like we’re still warming up. The group is really good.”

Jane Bunnett and Maqueque perform at the Painting Bride on Friday, May 13th. Tickets and information can be found here.