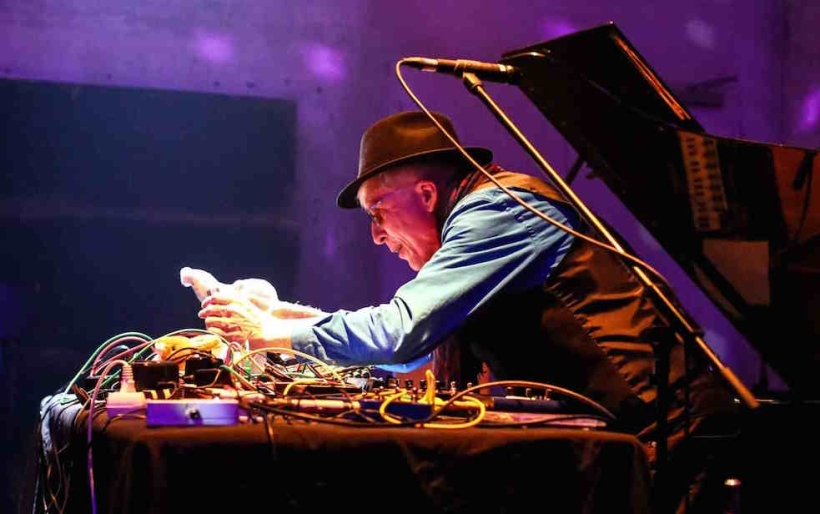 Rhys Chatham | photo by Roland Owsnitzki | courtesy of the artist

In the timeline of rock history, the Ramones are typically hailed for their stripped-down, back to basics sound, a necessarily primal scaling back from the excesses of prog and fusion. But when an unsuspecting Rhys Chatham walked into CBGB for the first time in May 1976, he was coming to the nascent punk scene from the opposite direction – the even more extreme austerity of minimalism – so he had a very different reaction to the Queens foursome.

“The sound was so complex,” Chatham gushes 40 years later from his home in Paris. “I was playing one chord and they were playing three! I was completely wowed by it. I had to figure out a way to integrate, to use Iggy Pop’s expression, the ‘raw power’ of rock into my own music.”

Chatham now considers seeing the Ramones that day his “second epiphany” – the first being the performance of Terry Riley’s “Poppy Nogood and the Phantom Band,” with its layers of soprano saxophone built up through the use of tape delays. “I walked into that performance as a lover and composer of post-serial music like Stockhausen and Milton Babbitt,” Chatham recalls, “and I walked out a confirmed minimalist.”

It took the pair of epiphanies to set Chatham on the course that would define his compositional approach over the next four decades. A classically trained flautist, Chatham shifted his focus to the electric guitar immediately after being introduced to the punk scene. “The way I look at it now is that I functioned as a secret agent in the rock context,” he says. “I started embracing the lifestyle and hanging out in clubs. I started out with such an arrogant attitude: ‘Rock is easy. I can play the Boulez Sonatine for Flute and Piano; rock, you count to four. How hard could it be?’ Then I played and found I was very stiff because I was thinking as a classical musician.”

After joining a band and woodshedding for a year, absorbing the rhythms and attitude of contemporary rock music, Chatham wrote the landmark piece “Guitar Trio” in 1977. He insisted on premiering the piece not in some welcoming art space like The Kitchen but in the potentially more hostile environment of Max’s Kansas City, the New York City club frequented by the likes of the Velvet Underground, the New York Dolls, Television and the Talking Heads.

“I wanted ‘Guitar Trio’ to be a piece for rock musicians played by rock musicians in a rock context that was not not rock. I never called myself a rock musician back then because I had too much respect for the form. I will say that when we played it at Max’s, I was scared to death. It was at the height of the punk rage, and the attitude of the audiences back then was if they liked you they would throw beer cans at you. If they didn’t like you, you knew it. So I was almost cowering. But afterwards, people came up and asked where we were hiding the singers – you didn’t have to have a master’s degree or know what overtones are to appreciate the subtleties of the music. People of my ilk heard a new strain of extreme minimalism. The rock people heard a wall of noise.”

Chatham later expanded “Guitar Trio” into a massive piece that featured 100 guitarists, including members of Sonic Youth, Swans, Godspeed You Black Emperor!, Modern Lovers, Tortoise and Hüsker Dü. He went on to compose for ever-growing aggregations of the instrument, culminating in A Crimson Grail, his piece for 400 guitars that was performed at Lincoln Center in 2009.

“After doing that I thought, ‘What am I going to do next? Write a piece for 1000 electric guitars?’ It seemed sort of silly,” Chatham says drily. Instead he veered in the opposite direction, beginning a practice of solo performance inspired by Riley but using modern technology to loop his trumpet and guitar playing at 9, 10 and 11-second intervals, amassing a densely-layered tapestry of sound that can ebb and flow between gnarled tangles of wiry lines to trance-inducing drones that undulate and ripple.

Chatham’s latest recording, Pythagorean Dream (Foom.), captures that sound, along with his return to his first instrument, the flute. He’ll open his performance on FringeArts next Tuesday, May 24th with some of his solo work, then perform in a trio with bassist Tim Dahl (Child Abuse, Lydia Lunch’s Retrovirus) and drummer Kevin Shea (Mostly Other People Do the Killing, Talibam!), performing an expansive new piece of guided post-punk improvisation.

“One of the good things about being a musician as opposed to being a novelist or a painter is that music is a social medium,” Chatham says of his collaborations with younger artists. “You get a chance to profit from the creativity as well as the energy of the other musicians that you’re playing with. And three musicians is logistically a lot easier than playing with a hundred.”

Rhys Chatham performs at FringeArts on Tuesday, May 24th, as part of the Ars Nova Workshop concert series. More information on the concert can be found here.