Our Best American Girl: Grown Up Talk with Mitski 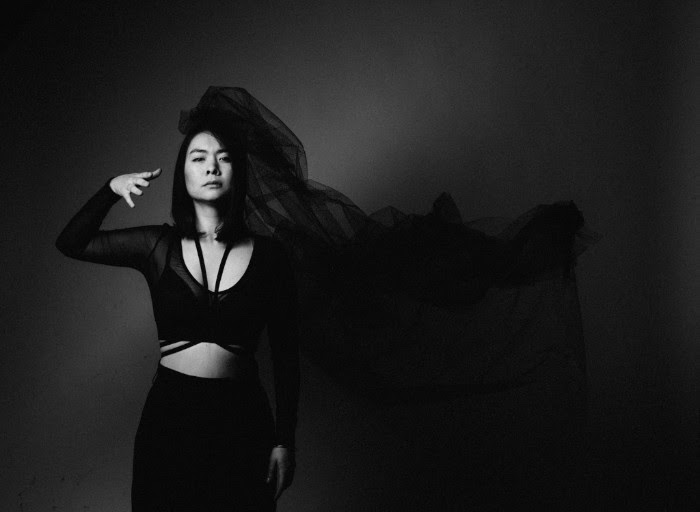 Mitski | photo courtesy of the artist

Our Best American Girl: Grown Up Talk with Mitski

Mitski Miyawaki understands the sobering realities of growing up more than most people twice her senior. If 2014’s breakthrough album Bury Me at Makeout Creek detailed the bad decisions and existential hangovers that come with first flirtations with freedom, its follow up Puberty 2 dives into how that dread of consequence and uncertainty lingers long into adulthood and beyond, haunting you even in your happiest moments. Or as her press release puts it more bluntly, “Happiness fucks you.” She of course elaborated further on that thesis in our recent chat ahead of two sold out shows in Philly this week. We talked about the new album as well as how she likes to write, perform, and be talked about…

TK: You’re touring in support of your new album, Puberty 2. This album kind of dives into the symbiosis between happiness and sadness. Is there a particular ratio between the two where you feel more creative or productive?

MM: I try to stay away from the mentality that I have to be in the midst of some kind of personal tragedy to be able to write – I don’t think that ideology is healthy. I don’t want to be sad. I think I just acknowledge happiness as another feeling that feels exhausting. Happiness is like a ride. After a ride, there naturally has to be a fall to balance the world out. Now whenever I’m happy, I’m waiting for the downfall to come. I think that’s where I was when I was making the record, just wanting to find some kind of neutral balance but not being able to yet.

TK: I get that. I also love how evocative the album title is in relation to that kind of expectation and anxiety just by having a number 2. It adds this instant backstory as well as paints adolescence as a sort of never ending ride or horror story.

MM: Yeah I don’t think we ever actually graduate from high school. That’s not the way the world works. We’re always stuck in some form of high school or we recreate it for ourselves. With the title, I actually struggled a lot with whether it should be a Roman numeral or just the number 2. I settled on number 2 but it was a great battle within myself.

TK: Anything in particular that gave that the edge over the Roman numeral?

MM: I think it was just the feeling of it being like a blockbuster movie, like “Puberty TWO!”

TK: You almost expect the title card to explode when you hear it like that.

MM: Right! Also just the comical aspect of how no one wants to watch like a “Cars 14” kind of situation, but it’s puberty.

TK: What was your most memorable experience while making the record?

MM: The whole experience has just become one hazy memory because we had to finish and record it all in two weeks. It was very efficient and non-stop. The memorable experiences were actually the times between recordings getting takeout and stuff. You know the feeling you get when you’ve just finished another good day at work and feel productive and like you earned those moments or that Chinese food.

MM: Yeah. Those little moments were really memorable because it felt like I was doing a real job and I never get to feel that.

TK: I’ve always thought you were a very acute songwriter. The thing I love about your lyrics is how they can hit you just as hard when reading them vs. hearing them, but in completely different ways. How does your writing process typically begin?

MM: I’m glad you say that! My writing process is a lot of editing. Not that I edit my thoughts, but a lot of the lines in my lyrics are things that I write throughout the day as notes. Often times when I sit down to write, it’s just putting together all of the thoughts I have about a certain topic and editing it. It’s less stream of consciousness and more organizational. I’m glad you said it made sense reading it. I find with lyrics that it’s an entirely different speech than like a poem. With lyrics, you have to write stuff that immediately evokes something in people the first time they hear it. You don’t always have the time to embed really complex metaphors.

TK: Do you ever write anything that you decide to keep or release in another form, like poetry?

MM: I don’t think I’ve ever written poetry that’s not meant for music. I’ve always thought of my words as being for songs or needing music behind it. TK: Are there any writers or authors that have stuck with you or motivated you to get into songwriting?

MM: You know what? I do truly love Paradise Lost [by John Milton]. I think the imagery and metaphors in that and the layered meaning inspired a lot in me when I read it for the first time as a teenager. Also, I really enjoy Annie Proulx. Her short story was what Brokeback Mountain was based off of. When I read her stuff, I had the same impression that you get from John Steinbeck where things don’t have to be all flowery. There’s a beauty and precision in language that’s not about being pretty but concise and evocative.

TK: While we’re on a lyrical kick, I read your social media post about Pitchfork’s writeup of “Your Best American Girl” and how they got a completely different meaning out of it than what you intended.

MM: Yeah it’s not that it was completely different. I think it’s that the emphasis of what the song means has shifted in music journalists’ minds. It’s a very nice, lucky, privileged problem to have where you can discuss what your song really means and have people interpret it in different ways. I mean just a little while ago, no one was even listening to my music. When I was writing the song, my focus wasn’t about society or anything outside my own little world. It was a very personal love song. My intention was always for it to be about one person, one relationship. But obviously, the personal is political as well, so all of those little societal things like race and class and how we interact with the world influenced the song somewhat and the relationship I was writing about. What isn’t political?

TK: It’s funny you say that because so many of your songs come from such a personal place and people in the press like to make that macro, talking about your role as an Asian woman in a predominantly white male realm and how you’re subverting genre, gender, race, etc. How do you feel about that narrative?

MM: On one hand, I think it’s an important thing to talk about because we can’t move forward without doing that. On the other hand, a lot of different people go into music for a lot of different reasons. My intention wasn’t to be an activist. It was always to express something personal. But the thing is everything I feel is also affected and shaped by politics. My existence in public is already political just by who I am. It’s not an intentional thing. I don’t shy away from talking about it. I’m not pretending we live in a different world. I think the danger in [that narrative] is that so many people want me to become a role model or a representation for an entire group. That’s one thing I’m uncomfortable with. I don’t want anyone following my example. I make mistakes. I can be problematic. We all can. I just try to correct people when they ask how it feels to be a “role model” because I don’t feel that I exemplify any larger group.

TK: Another thing that you recently brought up on social media regarding journalists and how they talk to about artists in general is how you’d like to stop being asked about your influences because it instantly diverts attention away from the music itself. As a journalist myself, that was something of an “A-ha!” moment. Was there any particular person or conversation that prompted that?

MM: The thing is once you or anyone else says an artist, it immediately becomes a comparison that you can’t escape and less of an honest investigation of what you are doing. For example, when I was making a music with just a piano, I would get nothing but Tori Amos and Regina Spektor comparisons, and those aren’t my influences. Once I picked up a guitar, I instantly got described as PJ Harvey or St. Vincent. I think a lot of these comparisons limit critique in that they close your minds to any other opportunities or ways to looks at music. You get “girl with guitar” and that’s where the conversation ends rather than begins.

TK: How do you feel you’ve grown as a performer? How your live performances this time differ from previous tours?

MM: That’s interesting because I’m very in performance. I’m always looking for a better, more effective way to present myself on stage and hold attention. I think I’m just learning how I can effectively communicate. When I first started, I lacked confidence because I thought you had to run all around stage with big bodily movements. Little by little, I realized that wasn’t my style and I didn’t have to do that. I haven’t figured out exactly how I’ve evolved beyond that but I’m still figuring out my style, how to create intimacy and a meaningful space. I want the audience to feel something.

MM: This time, I like playing two venues and being able to give people of any age to see one of the shows. Every time I play PhilaMOCA, the show just always turns out so well. I just seem to be wanted [in Philly], and it’s such a nice feeling. Philly has always just been so nice and kind to me, and welcoming.

MItski plays two sold-out shows this weekend, but will stop by World Cafe Live for a Free at Noon performance on Friday afternoon; RSVP for that here.