Farewell, ROCKERS: Reflections as a vital scene showcase comes to an end

“M​ost nights were fueled by whiskey, cigarettes, and caffeine and it sounded like a fight between hip-hop, punk rock and the blues” ​- songwriter / guitarist Joe Jordan

For over a decade, ROCKERS has held down its spot as the city of Philadelphia’s only event dedicated to showcasing punk, metal and hard rock bands fronted by women and queer musicians of color. Throughout its 10-year history, it has acted as an incubator for some of the city’s weirdest and most unique underground rock acts while creating a space of free expression for it’s performers and audiences – comprised largely of black and brown women performers and audiences.

These ROCKERD nights, all helmed by the event’s longtime host, the charismatic and confrontational poet and performance artist St. Skribbly LaCroix, laid a powerful, long lasting foundation. But on August 3rd, the series will be coming to an end. It’s a move the event’s founders Camae Defstar (aka Moor Mother) and Rebecca Roe have been contemplating since Roe moved to California last year with LaCroix and Defstar took the reins as the primary organizer. In the past year, Defstar’s profile as a performer and sound-artist has increased internationally as well, via her Moor Mother project and her work with the Black Quantum Futurism collective. When asked why the duo made the decision to end such a beloved Philly institution, Defstar states plainly that “ROCKERS is ending because it’s completed it’s mission.” By taking the initiative to create a space for black punks and metal kids to rock out freely, without judgement, while nurturing and empowering countless bands and influencing the city’s new generation of artists and activists, ROCKERS leaves behind a legacy that embodies punk’s DIY spirit. Without question, the event will go down as one of the city’s most unique live music nights — loud, roaring guitars, a packed, sweaty room and dreads swinging in the moshpit.

“T​here was never a ROCKERS showcase I went to that wasn’t memorable or impactful. The shows were well curated, and introduced me to new bands and artists I might not have heard about. The feeling at these events was receptive and open – people were willing to take chances on bands they had not heard before” ​- drummer Katy Otto of Trophy Wife When talking with Roe and Defstar about the origins of ROCKERS, both pointed to the influence of another Philly-based event that showcased live music performances from women of color: The Roots’ legendary Black Lily night at the Five Spot in Old City. The Black Lily was a key early platform, helping to launch the careers of future Philly superstars Jill Scott, The Jazzyfatnastees, Jazmine Sullivan and more. Due to the Five Spot’s notoriously lax security protocol, Roe and Defstar – two teenage punk kids – were able to sneak into the Lily, soak up the fertile, creative atmosphere and even take the stage to perform for the Lily’s knowledgeable and enthusiastic crowd.

Defstar remembers Black Lily fondly, “All the beautiful brown people packed in a room. Everybody talented, we always had to come early.” Roe adds “We were like 17, 18 (years old) sneaking in the back.”

Amongst all of the brilliance that took the stage weekly at Black Lily, one band in particular, Philly’s mythical punk / alt-rockers 3 7000 9 (pronounced Three-Seven Thousand-Nine) proved to be a inspiration for Roe and Defstar with their intense, feedback-drenched sets, fronted by a fierce, charismatic frontwoman, Nou-Ra.

After forming their own band, The Mighty Paradocs, and facing discrimination from a few shady managers and male show promoters, the duo decided to create their own event called The Mashup, hosted at the now-defunct Aqua Lounge in Fishtown. “We knew Carlos, who used to own and run Aqua lounge on 5th and Girard back when it was called North Philly,” Roe recalls. “Aqua Lounge is where it all started.” The Mashup featured a diverse array of hip-hop kids, punks and metalheads coming together for an eclectic night of music, fueled by raw energy, laying the template for what would become ROCKERS. Eventually, the duo fielded an offer to move the event from Aqua Lounge to South Street’s beloved bar / venue, Tritone. The duo decided to rename their event ROCKERS.

“Tritone used to be called Benny’s,” says Roe. “We performed there like 1999-2000 and Rick (Dombrowolski) banned us cuz we were under age, then one day he tells us that he heard about The Mashup and invited us to bring the event there. And the Tritone era began circa 2005-6.”

“9 years ago I was deep into the white punk scene. I met punks of color who told me about a safe space for afro punks. I remember being so excited that there was a community for me. I fell in love at ROCKERS. I broke up at ROCKERS. I transformed at ROCKERS. My future husband and I moshed together at ROCKERS.” -longtime ROCKERS devotee Innocenia Davoren

During this time, in the mid 2000’s, black, women-centered punk and hard rock music was not exactly a mainstream phenomenon. The now-famous, annual Afro-Punk festival existed in NYC, but it was hardly the pop-cultural juggernaut that it is today. In the early days of its six-year run at the Tritone, Defstar and Roe were struggling to maintain and grow ROCKERS in the face of small crowds and little money. “For like three whole years straight it was like nine people in the crowd,” Roe says. “We kept playing anyways. Then people just started coming. All of a sudden there were all these fly ass ladies in heels, moshing and fucking it up in the crowd.” 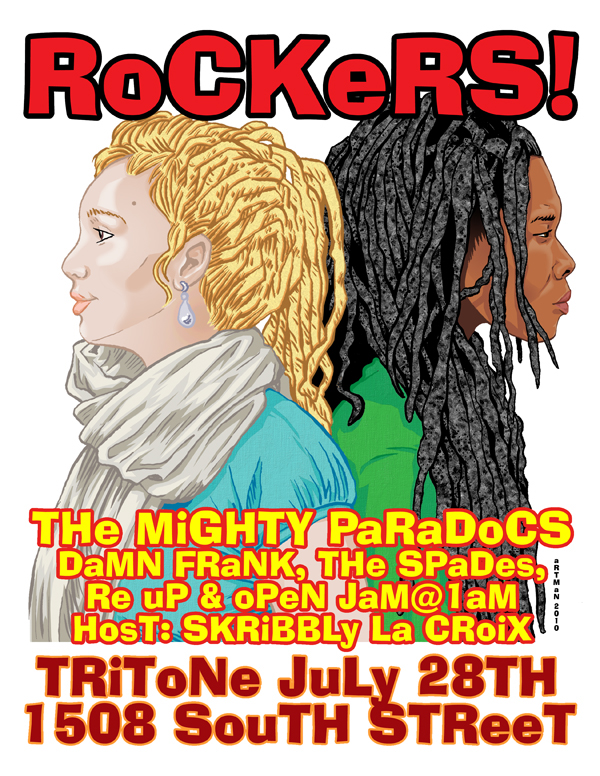 After years building up a core following of ROCKERS devotees and a reputation for booking quality bills packed with unique and diverse bands, local openers and national touring acts, Tritone was sold and ROCKERS took their act to Fishtown’s Kung Fu Necktie (during which time this author served as resident DJ for ROCKERS at KFN). I​n the years following the closing of Tritone, the event went on strong, growing and diversifying, culminating in the creation of ROCKERS BBQ Weekend, an annual multi-venue, DIY music and art festival that will continue on after ROCKERS ends.

From its beginning, ROCKERS was different from any other monthly punk / rock events in the city or across the country. ROCKERS was intentionally created to showcase black and brown bands with a particular focus on bands fronted by women. The importance of this mission cannot be overstated, considering the fact that black and brown women and queer musicians, and their fans, often find themselves alienated, marginalized and attacked when navigating the nation’s overwhelmingly white and male-dominated punk and metal scenes​.

“​Many of these so-called punk scenes where straight white males dominate, tend to horde and gate-keep DIY culture as if they invented it,” says writer and musician Alex Smith. “Of course, they got the idea of networking, creating, and distributing self-made, commercial free music and art from the early black rock movements, ska/dub reggae, and avant garde jazz artists like Sun Ra.”

Speaking with ROCKERS alums, performers and attendees alike, themes of inclusion, acceptance and family constantly come up. Many of them, particularly the women, have expressed that the event was the first time they felt safe to let loose and enter into a mosh pit, a physically intimidating space traditionally dominated by men.

“ROCKERS has allowed me to explore my quirkiness. It has allowed me to develop an appreciation for punk and rock music. It allows me to have a great time and forget about my own troubles. I absolutely loved being in the mosh pit, thrashing around with the crowd.”​ – visual artist and ROCKERS alum Ebony Collier

A short list of the bands that have played at ROCKERS is equally impressive and wildly eclectic: from Philly skate punk legends McRad, to psychedelic blues maestros The Baptist Preachers, The Spades, Purple Rhinestone Eagle, Soul Glo, EX By V, Ghetto Songbird, Joe Jordan’s Experiment, PINKWASH, The Kominas, Rebelmatic, West Philly Orchestra and dozens more have burnt up the stage at ROCKERS, many of them going on to wider, national prominence while others either burned out or faded away. Despite all of this, the legacy of the event and the magic that it conjured, remains. Equally important as the musical contributions that ROCKERS has left is the social space that it opened up within the city of Philadelphia. The relationships and creative energy cultivated at ROCKERS over the past decade have spread out and infiltrated the city’s broader music, art and literary scenes. Evidence of this wide ranging influence can be found in the queer sci-fi writings of Philly’s Metropolarity collective, the avant-garde film work of ROCKERS alums Bryan Green and D1L0, the interdisciplinary art and activism of Defstar’s own Black Quantum Futurism collective and throughout West Philly’s emerging radical post-punk scene.

“I think that it opened the door and more people started doing shows after being inspired by ROCKERS,” says Defstar. “It was the first place folks could have an active part in organizing shows. We helped create the next scene in Philly which is now a more diverse one.”

With its DIY spirit and dedicated practice of envisioning and creating alternatives where none existed, ROCKERS has enriched our city’s cultural landscape and left our music scene much more fierce, colorful and simply better than it was when the event was born a decade ago. Though a part of it will live on through the annual ROCKERS BBQ and in the memories of countless musicians and scene kids who got their life on stage or in a ROCKERS mosh pit, one can’t help but feel sad to see such a good thing end.

“I’​m humbled by the fact that people have discovered friends, lovers, and tried their hand at an instrument or fronting a band at ROCKERS,” says Roe. “It felt like safe space for us to play and go to the extents of our imagination and hearts.” ​

Adds Collier: “I ​don’t think anything will be quite like ROCKERS.”​

8. The Kominas – Wild Nights in Guantanamo Bay (Self Released)

Also of interest is the hard-to-find Afro Pick compilation featuring tracks from The Mighty Paradocs, Roulette and a snippet of a talk from former political prisoner and Black Panther/Anarchist theorist Ashanti Alston and more.

The Last ROCKERS with Kominas, Moor Mother, Ghetto Songbird and a reading by members of Metropolarity takes place at  Everybody Hits on 2004 Ridge Avenue this Wednesday, August 3rd. More information can be found at Facebook. The ROCKERS BBQ Weekend takes place on August 27th and 28th, also at CFL.