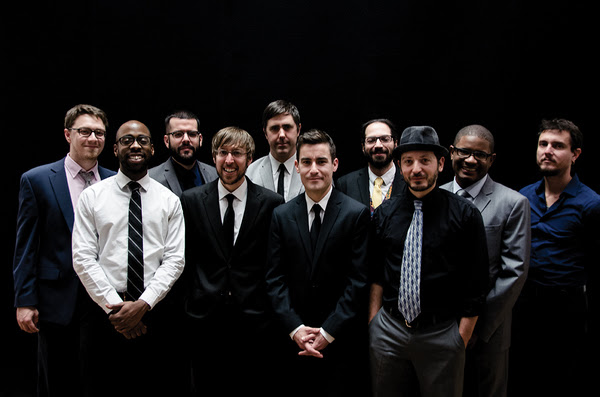 When the Fresh Cut Orchestra returns to the Painted Bride, the venue that started it all, the occasion was always planned to be both homecoming and celebration, falling just one day after the release of the ten-piece ensemble’s second CD, Mind Behind Closed Eyes on Ropeadope Records. As it turns out, though, the show has also become a farewell, as trumpeter and co-leader Josh Lawrence made the move to New York City earlier this week.

On the phone from his rapidly emptying Philly place a few days ago, occasionally interrupted by movers pushing past on their way out the door, Lawrence insisted that the move wouldn’t cause any drastic changes for the FCO. “It basically means the mail’s gonna go to Jason instead of me now,” he shrugged, referring to bassist Jason Fraticelli, “but that’s really the only difference.”

Given the challenges of keeping a large ensemble together in today’s financial and musical climate, an extra couple hours’ commute is hardly the biggest hurdle that Lawrence, Fraticelli, and co-leader Anwar Marshall face in maintain the adventurous orchestra. The fact that they’ve kept the band active for nearly four years now is all the more remarkable given the fact that they were put together by Painted Bride music curator Lenny Seidman to celebrate the Vine Street venue’s 40th anniversary of presenting jazz in 2012, not by their own initiative.

Despite those beginnings, Lawrence says, “At this point we’re family. We’ve been working together so closely, it’s more than just music. I seem to surround myself with musicians who see it as more than a gig.”

This Saturday’s show will focus on material from Music Behind Closed Eyes, a very different album from the band’s 2014 debut, From the Vine – despite the fact that both were recorded at the same session. The first CD was largely taken up by Fraticelli’s six-movement “Mother’s Suite,” which gave it a certain narrative cohesion. Their follow-up is much more diverse, ranging from Latin flavors to muscular swing to wild, abstract electronic soundscapes.

“The first album was very linear and told a specific story,” Lawrence explained. “For the second one it kept sticking in my head that this one shouldn’t be us trying to tell people what each song is about because they’re so much more impressionistic. We wanted to ask people to think about what they see when they close their eyes and listen to the music. It’s like when you were a teenager listening to a Pink Floyd record in your room with your headphones on – what do you hear when you listen to Dark Side of the Moon?”

To help conjure that air of mystery, the band indulged in far more post-production tinkering this time out, adding overdubs and effects that add to the album’s dense atmosphere. That was one advantage of sitting on a recording for nearly two years before revisiting it, according to Lawrence. “It gave us kind of a clean slate. It was almost like working on somebody else’s record because there was so much distance. It kind of gave us a certain detachment, which was kind of cool.”

The album begins with the scene-setting fanfare of Fraticelli’s “My Summer in Puerto Rico,” one of a few tracks that feature the bassist playing the cuatro, a Latin guitar variant that he received while visiting family in Puerto Rico. That leads, in a whiplash-induging shift, to the electric-Miles funk of the title track, followed by the hazy electronic whirlwind of Lawrence’s “Augmented Reality.” He wrote the song, the trumpeter recalled, upon learning that guitarist and laptop musician Tim Conley would be a part of the band.

“I didn’t know what that meant at all,” Lawrence laughed, having never worked with electronic musicians before. He wrote the piece as an open environment for Conley to create inside, though it took some time for the band to find the right vibe when time came to record. “I told them I wanted them to sound like drunken skeletons marching in a parade. As soon as we did that, we had it.”

Lawrence’s fiery salsa tune “Frederico” is followed by the lurching swing of Marshall’s “Indecision” and the drummer’s soulful “New Expectations,” before the album closes with the bookend of Fraticelli’s “Gallo Y Gallina.”

By the time they arrive at the Bride on Saturday, August 27th, the band will have switched gears yet again. On Friday, they plan to head back into the studio to record their third album, Life Mosaic, music from which was premiered in 2014 as part of the Kimmel Center’s inaugural Jazz Residency program. The suite is divided into four parts, each dedicated to a phase of life from birth to death, with Conley joining the three bandleaders as a contributing composer.

Although the FCO has played larger venues, including the Kimmel and, on Monday, Dizzy’s Club Coca-Cola at Lincoln Center, they still consider the Bride to be their home base. “It’s been a long time,” Lawrence said, looking forward to this weekend’s show. “It’ll be great to go back and have our crowd back again.”

Tickets and information for Fresh Cut Orchestra’s show at the Painted Bride on Saturday, August 27th can be found here.