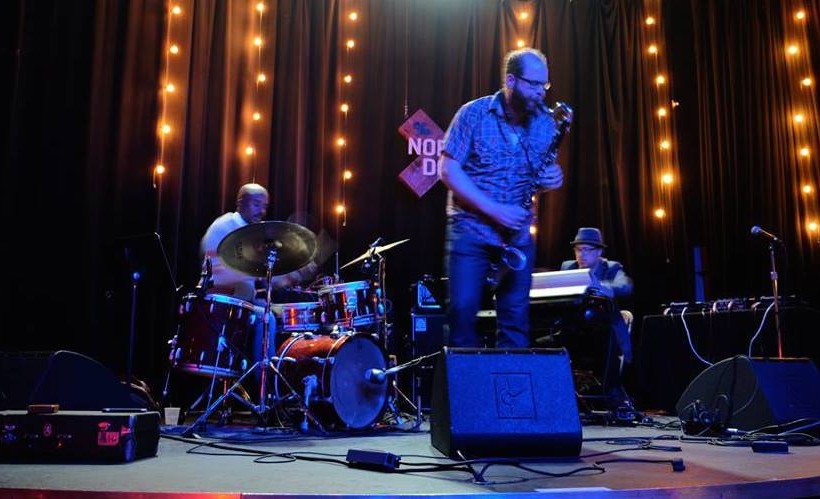 The jazz offerings in the city this month offer the opportunity to explore the music from a number of different perspectives. For a historical one, the ICA is hosting The Freedom Principle: Experiments in Art and Music, 1965 to Now through next March. The exhibition, which opened last year at the MCA in Chicago, tells the story of the influential Association for the Advancement of Creative Musicians (AACM) and its intersections with the visual art and culture of the era. It’s a must-see, and also features a number of performances to coincide with the show. But aside from that, this month’s standout concerts provide a number of different angles.

First of all, there’s a matter of scale: when Jason Stein takes the stage at the Boot & Saddle on Monday, it will be one of the smallest venues he’s played in quite some time. This summer, the bass clarinetist and his trio Locksmith Isidore was more likely to be found at Madison Square Garden or an arena with a bank for a name than the usual makeshift spots that typically welcome edgier jazz fare. Not that he managed to find the elusive formula for jazz mega-stardom, unless nepotism counts – the trio landed the opening spot for Stein’s half-sister, Amy Schumer. He’ll come back down to jazz-scale shows to celebrate the release of the debut album by his “bastard organ trio” Hearts and Minds, with synth player Paul Giallorenzo and drummer Chad Taylor (sitting in for Frank Rosaly) playing blistering abstractions that sound pretty much nothing like the simmering organ jazz that once was a mainstay in Philly nightclubs.

Then there’s the global: saxophonist Felipe Salles originally hails from São Paulo, so there’s inherently a Brazilian twist to his music. But the New York-based composer, who also teaches at UMass Amherst, looks to even more exotic locales for his latest project, the “Ugandan Suite,” which he’ll perform at the Painted Bride on Oct. 8. His septet features two percussionists: Brazilian Rogerio Boccato, who plays regularly with the Maria Schneider Orchestra, and Ugandan Damascus Kafumbe, who brings along a variety of traditional instruments from his native country. Salles’ suite is structured as a jazz safari, with movements based on each of Africa’s “Big Five” animals: lion, elephant, rhino, buffalo and leopard.

Pianist Harold López-Nussa arrives at Chris’ Jazz Café on Saturday the 15th just five days after his native Cuba celebrates its independence from Spain. The pianist’s tour, celebrating the release of his latest album, El Viaje, also comes in the midst of a more tentative celebration, as the U.S. begins to lift its trade embargo. Culture, of course – especially music – has never stopped its free flow from Cuba to the States and back, which is in part the journey referenced by the album’s title. The cover of El Viaje depicts a boat filled with piano keys drifting through the water, a poignant reminder that music has an easier time emigrating than does its creators. The conservatory-trained López-Nussa also traces his own journey on the album, coming full circle to record in his native Havana. In between the pianist, who enjoys dual citizenship in Cuba and France, has traveled the world, making his music uniquely global, so that a Monk tune can suddenly erupt out of an Afro-Cuban groove, or a cha-cha-cha can be colored with a wistful Parisian tinge.

The singular trumpeter Christian Scott has long looked at jazz from a post-modern perch, and coupled his most recent album, Stretch Music, with an accompanying app that allows musicians to play along by including sheet music as well as the recordings, and providing controls to mute, loop or otherwise control selected instruments. That’s just the latest manifestation of Scott’s expansive, sometimes radical take on the music, which absorbs sounds from rock, hip-hop, electronica, and whatever else enters his ears, all stirred together with his New Orleans roots. He’ll bring some mix of those sounds to South on October 12.

And finally, there’s the interstellar perspective: the Sun Ra Arkestra will celebrate Halloween at Johnny Brenda’s, offering their audience an excuse to share in their sequined sartorial splendor. Longtime bandleader Marshall Allen celebrated his 92nd “Arrival Day” earlier this year, and the saxophonist continues to conjure otherworldly sounds with undiminished force.