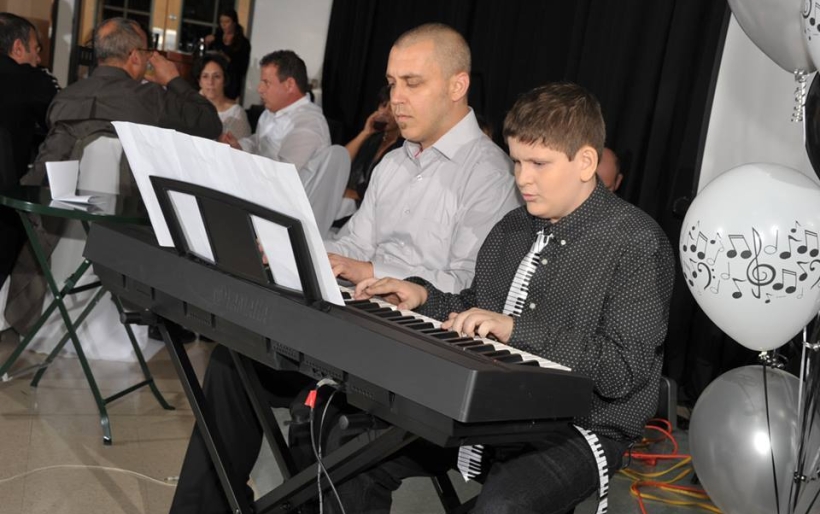 James Sauppe at a MontCo Music workshop | courtesy of the artist

DJ By Night, Educator By Day: Getting to know James Sauppe’s MontCo Music

James Sauppe is known by many in the city’s underground electronic dance music scene as the genre-challenging DJ / producer RVLVR. During the day, Sauppe applies his knowledge of electronic music as a teacher. As a professor of Music Technology at Community College of Philadelphia, Sauppe uses state-of-the-art music software to guide students through the intricacies of modern music making. He also takes on private students, teaching drumming and music production. Throughout it all, education remains at the center of Sauppe’s creative life.

In February of this year, after coming down with severe flu-like symptoms, Sauppe was diagnosed with diverticulitis, a digestive disease which causes inflammation in the digestive tract. After extended hospitalization, several intensive abdominal surgeries, Sauppe found himself in a tough financial spot. In response to this unfortunate turn of events, Sauppe’s students, friends and family rallied to his aid. “My students started a GoFundMe page for me and raised quite a bit of money to help with medical expenses and lost income. Some of them even continued to pay for monthly lessons, even though they knew they wouldn’t receive them. It was amazing how they came together for me and I’m eternally grateful.” Sauppe says.

It was this act of deep compassion from the community around him that not only provided him with the material support required to get back on his feet, it also inspired his next endeavor, one that would help him continue his mission of spreading music through education. Stated simply: “Their generosity and concern inspired the idea for MontCo Music.”

Officially launched in September, MontCo Music is an entity unlike a traditional music school. MontCo provides music instruction for young people in the Montgomery County, offering lessons in “instruments traditionally not offered in public schools, namely piano, prums, guitar, bass, DJing and electronic music production. The school also donates five percent of its funds to Play On Philly, a local charity that provides musical instruments and lessons to children in Philadelphia who would otherwise not receive them. Furthering this socially engaging music education, this weekend MontCo Music launches “Classic Vinyl Saturdays,” a monthly event in which students, instructors and supporters gather to listen to a classic album on vinyl. Each event offers attendees pizza and an in-depth discussion of an important document of musical history.

Keeping in tune with MontCo’s stated mission, 100% of the funds raised by “Classic Vinyl Saturdays” will also be donated to Play On Philly. Sauppe explains the intention behind the event: “ I’m always encouraging my students to listen to classic records. So I came up with the idea of having this event where I bring my record player and monitors and expose the kids to classic albums, one at a time. It starts with a discussion of the history of each record, then we listen to the record straight through, then have further discussion. I wanted to have a monthly event that would raise money for Play On Philly, but I also wanted it to be something unique and cool for both the students and parents.

“In my opinion,” Sauppe concludes, “listening to music is almost as important to a growing musician as practicing.” MontCo Music’s Classic Vinyl Saturdays kids off this Saturday, September 26, at 4:00 p.m. at White Pines Productions in Elkins Park. The featured album will be The Beatles’ Revolver. More information on the event can be found here.