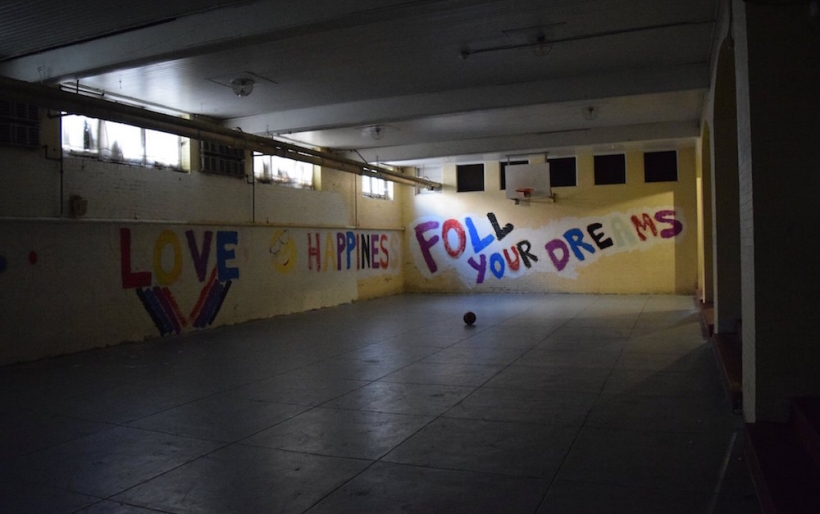 Church of the Holy Apostles and the Mediator, venue for 10 Synchronisms | photo courtesy of Elizabeth Huston

By Shaun Brady
December 01, 2016
10:12 AM
Share
Church of the Holy Apostles and the Mediator, venue for 10 Synchronisms | photo courtesy of Elizabeth Huston

Two years ago, harpist Elizabeth Huston invited audiences to wander through a musical performance rather than to just sit and watch one. Presenting Luciano Berio’s 14 Sequenzas – a career-spanning set of pieces for solo instruments or voice – Huston decided to mount each Sequenza in discrete spaces through the First Unitarian Church, presenting each one in a contextually appropriate, immersive setting from a circus scene to a 1960s bedroom.

Arriving in Philadelphia from her native Seattle a few years ago, Huston quickly became intrigued by the city’s diverse arts scene – and disappointed that the kinds of imaginative staging and performance that she saw in the Fringe Festival didn’t seem to translate into the classical music world.

“Seattle isn’t quite as culturally active as Philadelphia,” she says. “So the Fringe Festival completely changed the way I saw the idea of performance. I saw dance pieces that were site-specific and theater pieces where there was a lot of audience interaction, and I was really curious why I’d never seen that in music. It’s odd that all the other art forms are very interested in how they can innovate in the way they frame a piece, so I started thinking about how you could do that in music.”

In 2012 Huston founded the series “A Change of Harp,” which added visual elements to musical performances. Quick to insist that these extramusical elements were not just novelties, mere smoke and spectacle meant to dress up a drab concert, Huston conducted interviews with composers to get to the heart of what they were trying to communicate in their works and to express that in her staging.

The 14 Sequenzas performances were planned as a one-off event, but the reception was such that Huston immediately began exploring other possibilities in the same vein. She soon discovered Argentine-American composer Mario Davidovsky’s 10 Synchronisms, a similar lifetime-spanning (well, almost, as Davidovsky is still alive and hasn’t ruled out adding to the repertoire) set of pieces written for the interaction of acoustic and electronic instruments that she’ll present in two performances this Thursday and Friday, December 8 and 9.

Setting is crucial to the Synchronisms, which Davidovsky devised to explore the architectural spaces in which they’re performed. To illuminate that fact, Huston will lead audiences through West Philly’s historic Church of the Holy Apostles and the Mediator, where each of the Synchronisms will be played in an acoustically disparate setting, from an echo-laden gym to a less-than-resonant classroom to a traditional theater stage.

“Davidovsky is trying to color the space with sound,” Huston explains. “The space actually makes more of a difference with electronic music because the sound is coming from a different place than the actual acoustic performers and it bounces in very strange ways. I did think about which piece would be good for each space, but I mostly was interested in giving people an exploration of different acoustic properties and understanding how that effects their perception of a performance.”

The chamber pieces that Huston chose for the concerts (some of Davidovsky’s Synchronisms were written for larger choral and orchestral settings) span more than four decades, from 1963 to 2006. Given the evolution of technology during that period, the different pieces are revealing for reasons other than the acoustic properties of their surroundings. “It’s an interesting study of the entire compositional life of a composer from when he was quite young until the present time,” Huston says, “but it also reflects the capacity of technology in different time periods. The first few pieces were made by literally splicing pieces of tape together to create the soundtrack, and of course the newer ones were created with computer technology and are a little bit more complex.”

The experience for audiences is more than educational – perhaps more importantly, Huston points out, it’s engaging in a way that traditional classical concerts are designed not to be. (Though the training of classical audiences runs deep – the harpist’s attempts to involve audience participation in concerts have been largely unsuccessful.)

“I’m very interested in the idea of keeping your mind active during a performance,” she says. “I find that even for me, as a professional musician who should be very easily engaged by musical performances, when I’m sitting completely still in a room watching someone on a stage it’s very easy for my mind to wander and for my brain to stop focusing on what I’d like it to focus on. Moving from space to space will keep people intellectually active and make them able to really focus on the music because their brain is continuously trying to figure out what’s happening, where we’re going and what they’re going to hear next, and that helps to absorb and understand the pieces a little bit better.”

Though it wasn’t part of the original planning, recent events have placed a new lens over the performances as well. Huston moved up the timing of the concerts in light of November’s presidential election, wanting to spotlight the work of an immigrant to the U.S.

“A lot of artists think of their role as being a voice of the times, but that’s never really mattered to me until now. The humanity of the arts is something that really interests me, so I feel like showcasing the work of people who have immigrated into the United States and the huge contributions that they’re making to our society. I think it’s really important, particularly now.”

Tickets and information for the 10 Synchronisms concert can be found here.