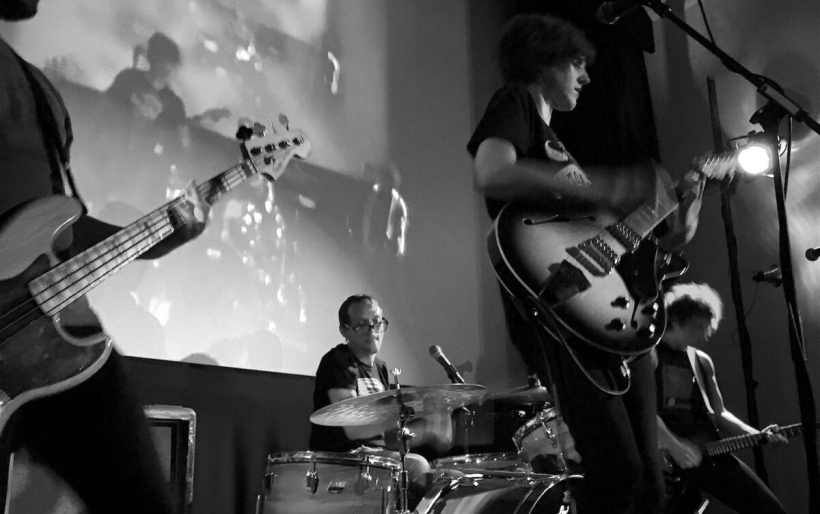 In Conversation with Worriers’ Lauren Denitzio

Punk collective Worriers made quite the well-earned splash two years ago with their fiery, Laura Jane Grace-produced debut album Imaginary Life. Their fans will get to see a softer, subtler side of the group’s sound, however, when front person Lauren Denitzio and drummer Mikey Erg strip things down to open for the one and only John K. Samson at World Café Live next week. Leading up to it, I chatted with Lauren about where things stand with the Imaginary follow up, their recent move to Philly, and how to motivate in the new political landscape.

The Key: You’re doing something a little different when you open for John. You’re playing a more pared down set as a duo with Mikey. What inspired that?

Lauren Denitzio: Well, for a lot of reasons. I felt it was more appropriate to do a stripped down set for these shows. I’ve played solo sets plenty of times where that makes more sense and I feel like I wanted to have the songs carry a little bit further, do a bit more with them. And Mikey is a great drummer, but he’s also a great percussionist in general. So I was excited to do a little bit more with the songs on stage and not just be by myself.

We also just finished recording a new record, and I think the new songs lend themselves more to these alternate versions. We just wanted to have fun with it.

TK: That’s exciting! So we can expect to hear hints of the new record in your set?

TK: And the new songs will be going in a more stripped down direction?

LD: Well not on the record. [chuckles] The songs will definitely have the full band sound to them. But you know, after being in the studio for a while, they’re fresh on our mind to kind of play around with live.

TK: Is there a release date for the new album yet? Perhaps a fuller tour to follow?

LD: No, not yet. I can promise that those things are coming soon though. The only thing I can say right now is that it’s recorded, and we’ll definitely be touring more this year.

TK: We’ve been seeing snippets and updates of progress on the new record on your Instagram. What direction will you be taking things, thematically speaking? Obviously a few things have changed in the world at large since Imaginary Life.

LD: Yeah… [laughs] Well, I think I approached the new record by thinking, “What types of things would I personally want to listen to in order to help me get through stuff, or would help me process different things that are going on,” whether that’s in my personal life or politically. What are the songs that I would want to blast in my headphones when things were really difficult? A lot of the songs were obviously written before the election, but it actually ended up being more appropriate somehow. It’s not a vast change in direction, but I definitely think it takes note of the things going on in the world lately.

TK: On that note, in light of what’s happened and still happening, what is something that you tell yourself that you would tell to other people trying to deal with it?

LD: I think it’s really easy to feel defeated if you’re reading the news everyday, and I have a lot of sympathy for that. The things that I try to tell myself are specifically things to psych myself up: to go to meetings or demonstrations, to make sure I’m reading the news, calling representatives, messaging people about things and feeling like there are other people around me that also want to speak out and have always wanted to speak out. It’s just important, now more than ever, to feel empowered and to feel that your voice is being heard, even if it’s only on a local level. We need to find our communities and the people who support us.

TK: That makes a lot of sense. Speaking of community, you’re living in Philly now! What brought you here?

LD: Well I lived in New York a long time. I grew up in New Jersey. A lot of my friends were in either city for a long time. As the band has become much more of a focal point in my life and in my partner’s life—Lou (Hanman) also plays in the band—we’re on tour all the time and it doesn’t make much sense to keep paying Brooklyn rent, especially when a lot of our friends have left there. We moved here in May and it’s been great. I’m really glad we made the move.

TK: Does anything about Philly surprise you, either in the past or since you moved?

LD: I don’t know that I’m necessarily surprised, but it is interesting to see the differences in a smaller city. I feel like I joke about certain elements in Philly but it’s not necessarily funny. [laughs]

LD: Haha, yeah, that’s true. It has been an adjustment from a larger city but I’m happy for those things.

TK: How would you say you’re different now since Imaginary Life came out in 2015?

LD: Oh, wow. That’s a good question. I think we have toured a lot, and I don’t want to say that it’s changed the focus because I was just as focused when we were recording that last record. I think it gave us the opportunity to focus even more. Especially with moving to Philadelphia, I feel like the entire structure of my life has changed. I was always structuring things to be able to travel play shows. That was first priority for a very long time. I think now I’m much more comfortable now overall.

Also after playing basement shows for a very long time, doing everything ourselves, booking shows, I guess my perspective has grown a lot. I feel like it hasn’t been until the last couple of years that I’ve been able to really use the skills that you build when you do those things yourself. You learn a lot and it’s only in recent years that I’ve understood how to best harness all of that, and the other people in my life who are also focused on those things.

TK: And finally, how cool is it to be opening for John? Are you Weakerthans fans?

Worriers plays World Cafe Live on April 4th with John K. Samson and the Winter Wheat; tickets and more information on the show can be found at the XPN Concert Calendar.