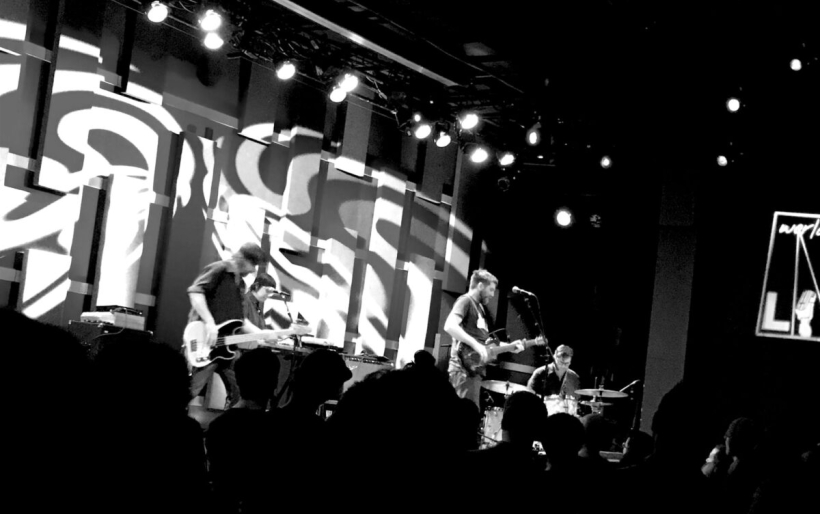 “We are a middle aged soft rock band from Canada.”

This is how John K. Samson christened himself and his Winter Wheat band on the downstairs stage at World Café Live this past Tuesday. It was a gently self-deprecating statement with that felt accurate in spite of itself. The band’s set was indeed filled with softness and warmth as it reminisced about recovery and relationships past, as well as Samson’s own musical legacy via several covers of his signature band The Weakerthans.

Before this trip down memory lane, the audience was treated to a sharp, stripped down set by Worriers members Lauren Denitzio and Mikey Erg. Lauren used the minimal set up to emphasize the emotion behind material from their band’s rollicking Imaginary Life. Erg literally didn’t miss a beat, using nothing more than his hands on a cajón and the occasional maraca to convey just as much urgency as he might with a full drum kit. The set also teased intriguing hints of material from the forthcoming Imaginary follow-up, the best of which was an ode to adulthood anxiety called “What the Fuck Is Sleep?” If these new number pop with just a guitar and box behind them, expect the full band treatment on album to be anthemic. It didn’t take long for Samson and crew to take to the stage afterwards. This crew actually consisted of many of his fellow former Weakerthans, including singer-songwriter and wife Christine Fellows. The collective displayed an obvious confidence and chemistry with each other that resulted in a proficient, propulsive performance that perfectly complimented the poignancy of Samson’s songs. Full band work outs of Weakerthans classics like “Sun in an Empty Room” and “Reconstruction Site” alternated with solemn solo showcases from Samson that kept the crowd rapt.

The most haunting highlights of the evening were the numbers that paid tribute to Samson’s dearly departed cat, Virtute. “Plea from a Cat…” was a rocking remembrance of his relentless reliance on his feline friend to stay afloat, while the set ending heartbreaker “Virtute at Rest” recalled his loss with the same potency as recent reflections on human loss from Sufjan Stevens and Nick Cave. The overall feel of the set was less of a showcase for Samson’s new output (more than the half the songs were his former band’s) than a look at a life lived, loved, and occasionally lost via music. It looked back fondly while clearly having eyes on the present, and hopefully a long future.

It was obvious the crowd will be looking forward to it.