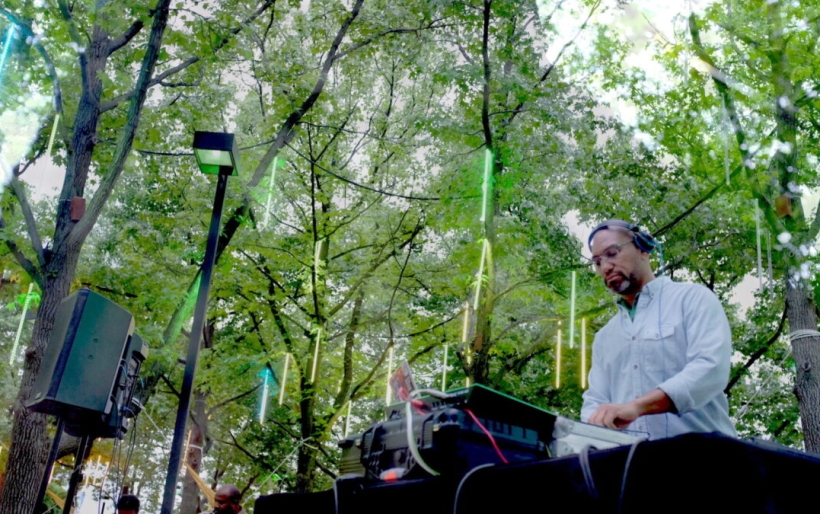 Philly grown, internationally known Producer, DJ and composer King Britt has been pushing the broad and malleable boundaries of Electronic music for the better part of the past two decades. Working under a variety of genre pseudonyms, Britt’s catalog serves as an illustrative study of dance music’s hallowed past, with several experiments that point to potential futures. Firefly’s heady take on Classic House music, the pristine Future Soul remixes released under the Scuba moniker. Keeping with this practice of exploring specific sounds/genres under different names, Britt premiered his Fhloston Paradigm project in 2011. Under the Fhloston Paradigm moniker, Britt infuses experimental production techniques electronics with Afrofuturist ideals. Deviating from the soulful, dancefloor-ready of his earlier work and diving into strange, evocative soundscapes. The Fhloston… project reached a high point of detail and refinement with 2014’s The Phoenix full length, released on the Hyperdub label. For his latest FP album, After…, Britt has fused the highly abstract style of minimalist composers such as Phillip Glass and Steve Reich with his own experiments in sound design Speaking at WXPN studios, Britt describes the process of making After… as a mixture of intentional planning and chance, composition, and improv. “I always wanted to do an album with no drums… I would be on airplanes a lot and the iPad just amazing for sketching out ideas and sound design, so I started making specific sounds for this album. Because I did a lot of these songs in the air, it was like floating… they were very airy, like songs that you would play on an airplane. I needed something to glue it all together”. Recording the album in Philly and Los Angeles, found Britt enlisting the help of several vocalists including RYAT, Pia Ercole, Kate Faust and Jacqueline Constance (who makes a standout appearance on the track “Glow”) to lay down improvised performances. As the album progresses, listeners may be surprised to realize that the vocals are completely wordless. Britt says that this was intentional: “They’re evoking the IDEA of words, you’re probably going to start hearing your own lyrics.” Reminiscent of Liz Fraser, lead vocalist of 80s Dream pop outfit, The Coctaeu Twins. The voices on After… serve as an emotional anchor that grounds the album’s floating ambiance injecting the electronics with a lively, beating heart of human feeling.

In addition to our on-air interview, Britt has shared a Spotify Playlist of musical selections that influenced the creation of After…. Spanning genre and mood, these influences include 80s Prog-Rockers Rush, British Techno innovator Actress, as well as The London Symphony Orchestra’s recording of Free-Jazz pioneer, Ornette Coleman’s Skies of America, an experiment that found Coleman expanding his Harmolodic improvisational theory into the realm of classical music. Talking with the man about the work behind the project and even a passing look at the influences that inspired it, will reveal the deep level of care and attention to detail that went into this process.

Catch Britt present Fhloston Paradigm at Johnny Brenda’s on July 25th. Listen back to his complete interview on XPN Local show below, paired his Spotify playlist.