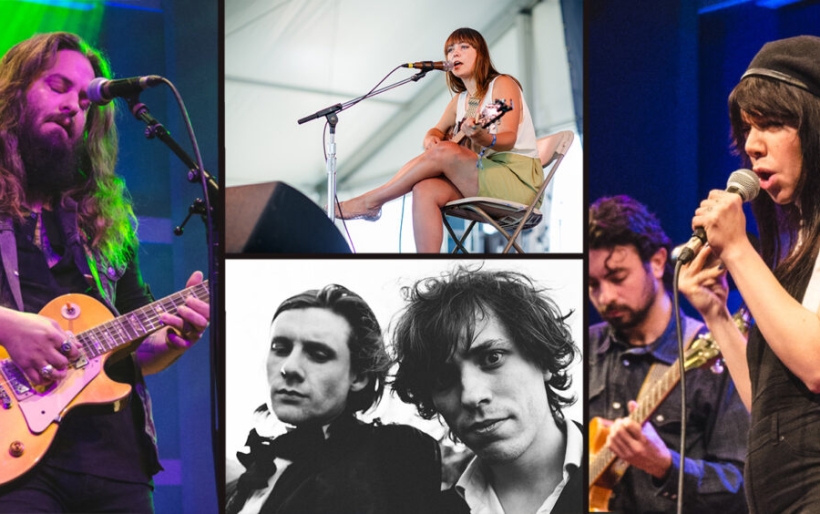 NPR’s World Cafe and XPN Fest are two peas in a pod. They’re great pals, they are. They even share some mutual best buds, who all coincidentally happen to be wildly amazing artists. These musical friends stopped by to hang at World Cafe with hosts Talia Schlager, David Dye and Ann Powers over the past year, and are now gearing up to pay XPN Fest a visit. Brush up on your XPoNential Fest artist knowledge and get psyched for next weekend by checking out a list of XPN Fest artist World Cafe sessions below.

Angel Olsen’s latest, critically-acclaimed release, My Woman, is a louder, grittier turn from her earlier soft folk stylings — mixing old-school, 50’s lavishness with grunge-y guitars and a no-nonsense presence. Listen to her World Cafe session below, where she talks about “rewriting her reputation, owning her vision and why she’ll always find it easy to ‘be sad and complain.'”

Sunny indie rockers Arkells formed as a college band that (gasp!) actually survived after graduation. Now knee-deep in their fourth full-length album, Morning Report, we’re very glad they did. Listen to the boys talk with fellow Canadian, Talia, in their World Cafe session below.

This Montclair, NJ crew consists of six of the greatest pals (some have been buds since childhood) who create twang-filled indie tunes tinged with a wholesome, earnest spirit that make you feel all of the things. Listen to their World Cafe session below, where they talk about following the “band” thing to do (a.k.a. moving to Brooklyn) and why they peaced outta NYC for their NJ home.

After first getting noticed in the aughties as part of the folk outfit Carolina Chocolate Drops — and making jaws drop with her cover of Blu Cantrell’s “Hit ‘Em Up Style” — Rhiannon Giddens has crafted an impressive solo career. Her second solo album, Freedom Highway, came out this year, and as World Cafe’s Ann Powers writes, “there are very few artists who can bring the past into the present in a way that captures both the nuance of history and the immediacy of now.” Listen to her World Cafe session below, where she performs the “The Love We Almost Had”

Strand of Oaks is Philly transplant Timothy Showalter’s project of pure rock awesomeness.Listen to Showalter’s session below, where he talks with David Dye about his album Hard Love, the “pull between domesticity and the call of the wild” and “reconnecting with his rock ‘n’ roll adolescence” on anthemic track “Radio Kids.”

For this flamboyant indie rock duo, Talia sums it up best: “If Keith Richards put on a poodle skirt for a production of Grease and you added a 40-piece orchestra, you might have something resembling Foxygen‘s new record, Hang.” Listen to their World Cafe session below, where the two talk about bonding in high school as “theater nerds” and their current flair for everything dramatic.

They’re smooth, they’re suave, they’re oh so charming. They’re Chicano Batman. Listen to their World Cafe session below if you’re curious to find out the story behind the band’s intriguing moniker, and to also hear Chicano Batman discuss politics and music, and how the current climate influenced their song, “La Jura.”

They’re a liberal Southern, country-rock band who recently put out a politically-charged, somewhat controversial album, American Band. I mean c’mon, that’s a whole lot of interesting to unpack. Get to know the band by listening to their World Cafe session below.

Hurray for the Riff Raff

As Talia Schlanger writes, “Hurray for the Riff Raff has always been a voice for the underdogs and the outsiders, and the band delivers that spirit in spades on a new, rousing album.” In this interview and session, Talia talks to frontwoman Alynda Segarra about returning home to the Bronx, reconnecting with her Puerto Rican roots, and the new album The Navigator.

When she isn’t making music with her revved up punk band A Giant Dog, Austin’s Sabrina Ellis fronts Sweet Spirit, a glitzy and glam-tinged five-piece that channels several decades of classic rock into their sophomore album, St. Mojo. It’s pure party rock, and Ellis and co-founder Andrew Cashen about the band’s background and a chance encounter with Spoon’s Britt Daniel in their World Cafe Session.

The XPoNential Music Festival takes place June 28, 29th and 30th at Wiggins Park and the BB&T Pavilion on the Camden Waterfront. For tickets and more information, visit XPNFest.org.