Philly-born auteur Naeemah Maddox starts in her bedroom studio, ends with a prog rock epic for the ages - WXPN 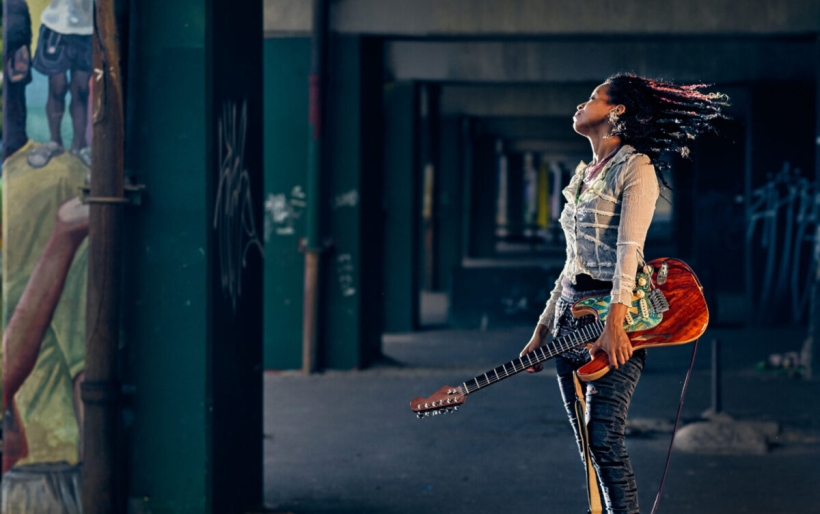 Naeemah Maddox | photo by Kev Steele | courtesy of the artist

Philly-born auteur Naeemah Maddox starts in her bedroom studio, ends with a prog rock epic for the ages

As early as 2007, singer / guitarist / composer Naeemah Maddox began working on a collection of straightforward but evocative songs designed to capture the spirit of the human condition. Working through a series of personal and professional struggles, the music grew slowly but surely. These simple tunes would serve as the backbone of her recently released full-length, Vile Tyrant And The Middle Men. Plugging away for nearly a decade, Maddox recorded demo versions of each song in her small home studio setup meticulously laying down vocals and guitar in the privacy of her West Philly apartment. As Maddox explains, the interplay of her voice with the guitar served as the launching point of the dizzingly complex songs.

“All of the songs have a simplistic foundation,” Maddox says. “Although it may be hard to discern. All of the basic structures of the songs, with the exception of ‘Fun with Fun,’ were started with just guitar and voice. Guitar is an important tool for my songwriting, basically because of all the harmonies you can use and discover. It’s easier for me to created from the bottom up…the bottom being the guitar harmony.”

As the years passed, Maddox — currently based in Brooklyn — continued to revisit these simple demos, pouring out ideas, reimagining harmonies and outfitting the songs with impressively complex arrangements. The end result is powerful collection of soulful and challenging rock music.

As the songs for VTMM matured, Maddox was joined by Tony Flagiello (drums), Josh Freshy Cisario (Bass) and Scott Radway (mix engineer) who all contributed to the final execution of her vision. With its soaring riffs, uniquely metered rhythms and unpredictable changes, the music on VTMM will immediately bring to mind some of the titans of 70s progressive rock; YES, Genesis, Jethro Tull and the like. Despite this, Maddox points to a different set of foundational influences, acknowledging that 90s hip-hop, R&B, Motown and musical theater played a bigger part in developing her musical vocabulary than say, King Crimson.

“It’s really interesting to hear what influences people are sure I have,” Maddox says. “I’m not particularly well versed in prog-rock but I’ve always been drawn to elaborate arrangements. And these range from classical pieces I’ve played in school orchestras. Also, I have a affinity for some musical theater and I think that is really big influence for me as a songwriter. As far as the harmonies I use — I believe it is directly influenced by the rich harmonies I heard in R&B / Motown songs growing up. Stevie Wonder, Michael Jackson, Diana Ross, Anita Baker and later groups like Mint Condition, SWV, Tevin Campbell, Whitney, old  Mariah Carey,  Tony! Toni! Tone!… The harmonies are just so rich in that music….and I feel that I never got bored.”

As the songs for VTMM blossomed, growing more complex and expressive over the years,  Maddox overdubbed all of the flute, violin and keyboard parts herself, molding the the album’s themes into a grander whole and a loose concept about the ways in which we struggle for progress on booth the micro (personal) and macro (sociopolitical) planes. The opener “Apple” is a delightfully unique, riff-heavy rocker the touches on the nature of truth and knowing. With its tricky time changes and soulful harmonies, the song seems to have been transported from some strange alternate universe where R&B songstresses En Vogue routinely perform with Fragile-era YES as their backing band.

The album closes with “Softer Side” a shockingly expansive piece of ambitious psychedelic pop that pays touches on the our search for individuality, meaning and faith. “I say you can breathe and send your light. When you’re swallowed by doubt and never give up, for promise comes your way…”

A fittingly optimistic end to such a penetrating, hardfought work of art. When asked about the future, Maddox is as open and hopeful as the music: “This album is especially important to me because I went through so many struggles as an artist, working in some crazy partnerships where I was never able to truly realize my ideas as a composer. For years, I’ve dared to record my own album and I finally got to the point where it was the only option. It’s been 10 years since my debut release and it just feels really great to release an album that is the most true version of where I am in my musical journey and where I hope to explore next.”

Naeemah Maddox plays in the Gretchen Elise Band tomorrow night at the Penn Museum’s Summer Nights concert series. For more on that show, visit the XPN Concert Calendar; to keep tabs on Naeemah’s solo gigs in the area, follow her on Facebook.