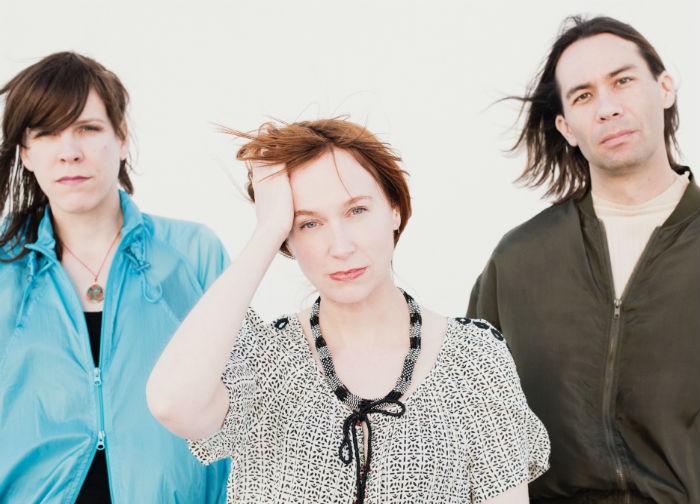 Rainer Maria | photo by Shawn Brackbill | courtesy of the artist

Ever-Evolving: In conversation with Rainer Maria about time apart, the new album S/T, and Philly memories

Rainer Maria recently released their first album of new material in over a decade, the propulsive, powerful S/T. Short, sharp, and intense, it finds the trio simultaneously evolving from their signature emo roots while seeming to actively dialogue with them in real time.

They will be bringing those songs, past and present, to Underground Arts in Philly this Friday. Ahead of the show, I got to have a chat with Kaia Fischer, Caithlin De Marrais, and William Kuehn about what it’s like to be back together, how much has changed, and how those changes inform their music and approach to life now…

The Key: You have a new album out, S/T. Was this album in the works back in 2015 when you did your initial run of reunion shows, for lack of a better word, or did going back out on the road again inspire it?

William Kuehn: We actually started off writing (the album). We didn’t have any kind of notion to play shows when we initially got back together. There had been a couple offers, so we met up, had dinner. We had all been travelling for so long, doing our own thing. We found this house back in New York and were like “Well we have a rehearsal space. Let’s see what we can do. Let’s see if we would have fun writing.” That was the original idea, to just go into a room and start playing and writing together again.

TK: What was it like writing and playing together again? Did it come easily?

Kaia Fischer: Yeah, the dynamic between the three of us was really wonderful and easy. It almost seemed in some ways like we fell into playing together in the practice space this time easier than any of us felt before for some reason, which was great. For me, the time away from playing in the context of Rainer Maria really helped me lose some of my old patterns of how I played in the band before. So it was easier to come back with fresh sounds and ideas. I felt like I was hearing new stuff from my bandmates too.

TK: What do you mean when you say patterns?

KF: Like actual physical patterns. Movements of my hands on the guitar, chord progressions that were familiar in the context of the band. Things that are simple, almost body memories that were unlearned over time. It was cool to come back and feel free of that a little.

TK: Did the rest of you feel something like that too?

WK: I definitely did. I had been playing with a lot of people during the break. Often times I was a drummer for hire. Bands would record an album on their computer, get signed, and then need someone to help realize the drums on the album live. I would come in, kind of learn the songs and what everyone else was doing as an outsider. That gave me a new perspective. I came back to Rainer Maria being able to step outside of the songs and view how the instruments were interacting with one another. That was something I wasn’t always aware I should be doing or was able to do before as a musician or songwriter. For this record, as a producer, it was a big help.

TK: In addition to what you learned about yourselves as musicians during your time apart, what would you say you brought to the table from your personal lives?

Caithlin De Marrais: I think I brought a real ability to be present, with the songwriting with the moment, and to not take anything for granted. Also to trust instincts more, and I think that came from maturity and experience, but also a desire to engage with songwriting at a level that I maybe wasn’t confident to access before. That’s one of the good things about aging is that you do seem gain more confidence. At least I did myself.

TK: I wish I had that part of aging cracked.

CD: (laughs) Well I’ll amend that to say more confidence in my choices, or willingness to engage. It’s something that I’m still learning.

KF: It would kind of be an interesting question to hear everyone answer about what they noticed was different about everyone else!

TK: I was just about to go there!

KF: I think I would have given a lot of the same answers that my bandmates gave about themselves. Like I noticed that William seemed like he was bringing a wider range of rhythmic idioms and honing in on small, but also really telling and important changes to the song. Something that was pretty good would open up into something better. That was cool to see, the attention to the details of what makes a song level up and also a greater musical vocabulary.

From Caithlin, I noticed a really unique ability to spin on a dime, a real “unattachment” to what was happening. If some was like “well what if the bass was different somehow,” Caithlin would just produce a new bassline or take the vocal in a new direction at the drop of a hat. That’s a really underrated skill, to continuously create new ideas around the same piece of music.

TK: Do these skills manifest on stage in addition to in studio? For example, Caithlin, do you find yourself following new tangents when playing songs live that you didn’t necessarily find or follow making the record?

CD: That’s a good question. I almost want you to ask it in a different way. I want to know exactly what to get at.

TK: Let me try to expand it a bit. Do the things that you’ve learned and brought into the studio manifest live? Have you discovered similar stuff about yourselves and each other when you’ve played on the road?

CD: A simple answer would be yes. I’ve been a performer all my life as a dancer, so I’m using what I’ve learned from that on stage, even though I have a bass securing me to one spot. I think a willingness to be really present with the situation, to feel where I am at the time but also be engaged with what’s happening around me helps. I think I used to perform in a way that was more insular, and now I’m looking to expand that. It’s being very spur of the moment. It’s noticing that it’s rainy and that my body is going to move differently than if it were sunny. It’s being aware of that and it’s very exciting to me to meld all this different awareness in my life.

TK: What is it like to play your older stuff live now alongside your new record?

KF: I’ve been really interested to see which songs would call to me or to us in terms of the old catalog (while touring). For me, there’s the song “Viva Anger, Viva Hate” off the first record. We hadn’t played that for some time at the end of our original run, at least not regularly. We’ve been playing that one again because it felt like one we could do again. It’s been interesting to see the flux of reasons that shift what makes sense to play. It’s not just about aesthetic or what goes with our songs now. There is that, but also what’s happening in the culture musically, and what’s happening in the culture emotionally. There’s material that comes up like “Oh I never thought we’d be in a place where people would stand in a club and want to feel collectively in this kind of ‘zone’ again.” It’s been really interesting to me.

I’ve also really been drawn to the older song “New York 1955” lately. I’m like “Do I really want to open the door in myself to the emotions that underpinned this song originally? Am I ready to synthesize that emotional process again? It’s interesting to see what we’re ready for, not ready for, what feels right, what doesn’t.

CD: That keyed me in to something you (Kaia) brought up about the sort of scene we grew up in, the Midwest emo-indie scene. One of the aspects of it was that we were addressing some emotional work on stage. We’re not in the same place when we perform those songs now. Do we have to access those same emotions? Have they evolved?

KF: Certain over and undertones are baked into the song but they way they apply today is different. It’s interesting.

TK: That actually goes into my next question. When the three of you took a timeout last time, the country was in a certain state of political turmoil. We were in the second term of George W. Bush. Now you’re back, and things are different but in some ways the same, in some ways even worse. What is it like being eight years removed from one era of political tensions and coming into this new one? How do you reconcile those emotions that have changed or persisted since then with the new ones being felt?

CD: It’s certainly something we’re thinking about everyday, what the climate is. Our fans have always been very supportive and willing to go where we want to take them in a show. It’s very much a shared experience between us. I think, initially, it felt very cathartic. Like come and be cathartic with us. We want it to be a safe space for that. We’re thinking very deeply about these upcoming shows, what it’s going to feel like. We’re very to open to what each show presents us.

TK: You’ve obviously played Philly multiple times, as recently as 2015 at Union Transfer. Do you have any fond Philly memories?

WK: So many, really. I live here now. I’m making Philly memories every day (laughs). What about anyone else? Anything stick out?

CD: The intensity of the shows. The heat. The shows in Philly are always really awesome in that way.

WK: Sean Agnew actually emailed me after the last time and said we were the band that R5 has booked the most.

WK: Yeah, so that’s something. We love Philly, and Philly always seems to love us. And I moved here so you all won me over.