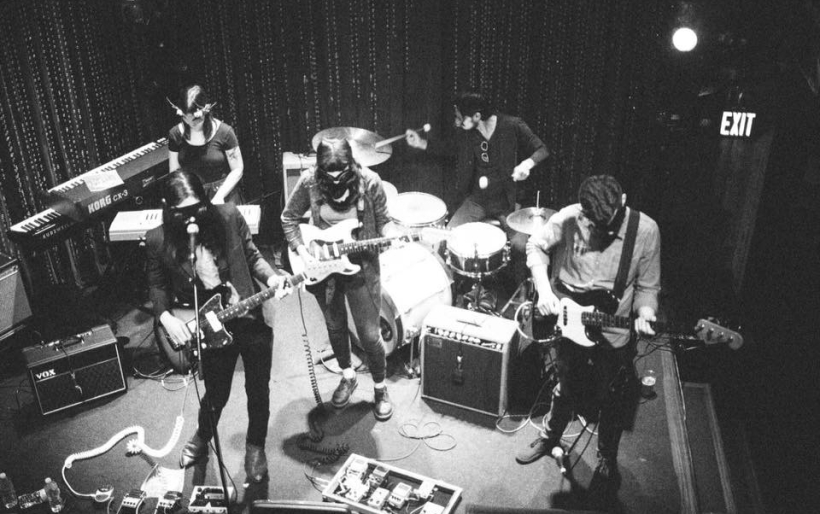 ‘Tis Mischief Night, my good fellows. You know what that means — cue lightning strike, thunder clash, echoing deep-throated cackles — time for some ghoulish shenanigans. And Philly’s resident retro spooksters, Haunted Homes, are here to get you in the wholesomely eerie mood with a new video for their aptly titled track, “Mischief Night.”

Though the band rocks and rattles our skeletal core with cheerfully chilling tunes year-round, with a name like Haunted Homes, October is their time to thrive. Which is exactly what the five-piece does in their vintage Halloween-themed mini film.

Directed by Bob Sweeney, the old-school video screams nostalgia through a crackling black and white film, where more than a few mysterious felines and devilish characters make appearances. Throwing nods to early silent cinema, it’s also loaded with other recurring shots of symbolic objects and scenes.

When asked for further meaning behind the video, Haunted Homes mirrored the film’s clipped, cryptic nature by offering:

“The concept for involvement of the rising moon, the mute thunder and high tide. The house cat is restless. A cauldron casts the mischievous spell. The ghost is on the chase. Hands of fire in the woods and behind the mask, a playful ominous opus of sight and sound.”

Watch for these cues in the video below. Then, be on the lookout, as new material from Haunted Homes may be closer than you think … (cue excessive, dramatic cackling.)

Though Haunted Homes’ gig with Chrysta Bell at PhilaMOCA’s Eraserhood Forever event is sold out, don’t fret — the band will be getting ghosty again on November 18th at Bourbon And Branch with Mr. Unloved, The Fantastic Imagination and Davey & The Chains. Find more info on the 21+ show here.
Related Content
View All Related Content