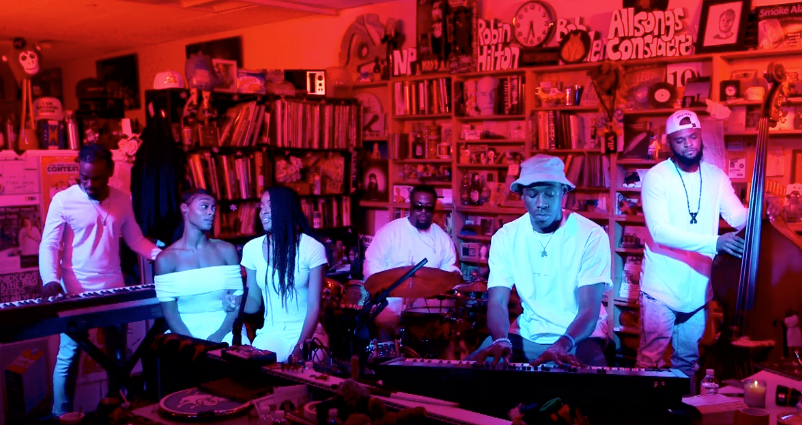 Hip-hop’s resident bucket-hat strange boy, Tyler, the Creator, stopped by NPR’s offices to perform not only his own Tiny Desk debut, but also to induct the first evening version of the Tiny Desk gig. Distinguishing the switch, instead of the custom clear natural light setting across the afternoon cubicles, vibrant backdrop lighting of deep fuschia, electric blue, and blood red drenched the typical work space, as it transformed into an intimate club atmosphere. Which, according to NPR, was the result of Tyler’s own request and the work of his hired lighting team.

Performing tracks off his newest, most contemplative album, Flower Boy, this mood lighting was perfect for Tyler and his extremely talented crew (specific shouts to the phenomenally talented supporting vocalists, Kaye Fox and Kiandra Richardson) as they performed saucy renditions of “Boredom,” “See You Again,” and “Glitter.” Towards the end of the performance, Tyler also offered his own words of praise for his band, noting his initial reluctance to implementing live arrangements before finding this perfect gang of artists, before sending out the show in very Tyler, the Creator fashion, as he had the band go around and introduce themselves, complete with the dreaded, Satan-created, ice-breaker of a “fun fact.” (Hey Satan, it’s not so fun.)

Don’t miss Tyler, the Creator when he plays alongside Vince Staples at the Liacouras Center on February 15th. Find info on that over at the XPN Concert Calendar, and watch the Tiny Desk show below.