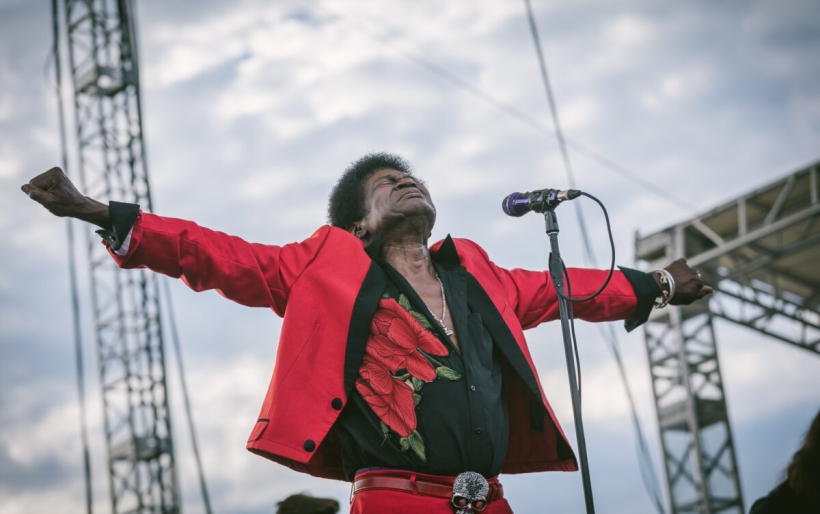 Charles Bradley and his Extraordinaires | photo by Jeremy Zimmerman for WXPN

By Kristen Kurtis
December 27, 2017
07:12 AM
Share
Charles Bradley and his Extraordinaires | photo by Jeremy Zimmerman for WXPN

Year-End Mania is the Key’s annual survey of the things below the surface that made 2017 incredible. Today, XPN Morning Show host Kristen Kurtis shares her most memorable musical moments of 2017.

No Doubt has been my favorite band since I first heard “Just a Girl” in 1995. As inspiring as Gwen Stefani was to my 10-year-old self, my fandom also runs deep for guitarist Tom Dumont, bass player Tony Kanal, and drummer Adrian Young, who cowrote the discography that is core to the soundtrack of my life. It’s a bummer that they’re on a bit of a hiatus while she focuses on her solo career, so I was thrilled when the guys announced their side project, DREAMCAR, fronted by AFI’s Davey Havoc. After seeing No Doubt a dozen times in stadium & arena settings, it was a treat to experience this supergroup in a much smaller space. It did my heart good to see them having fun with each other and the new wave sound at the heart of what they do. Bonus points for the “Moonage Daydream” Bowie cover. In the spring of this year, Minneapolis singer/songwriter jeremy messersmith released his new album, 11 Obscenely Optimistic Songs for Ukulele: A Micro-Folk Record for the 21st Century and Beyond, in sheet music form (available for free download here). He did this so people could hear the songs in their own voices before he released his versions, “because singing is powerful and singing in a group is one of the best social bonding experiences humans have.” He took this idea on the road with him, distributing copies of the songbook to small crowds that gathered around his 20-minute performances in public spaces. Ours was by The Moon Tree, and we shared a cathartic moment as a choir spreading the good word about kittens, the transformative power of love, and punching nazis in the face.

Concert buddies are everything, especially ones you immediately call when tour dates are announced so you can figure out when and where you’re going to see your favorite artists together. My dear friend Lindsay flew to Philadelphia to see John Mayer with me at the Wells Fargo Center in April, so I flew to Austin to see Lady Gaga with her at the Frank Erwin Center in December. If you’ve ever seen Gaga anywhere, you know her show is a utopia of acceptance and a dazzling display of performance prowess and vivid visuals. That was cool and all, but what was REALLY cool was the tip that she’d be joining her trumpet-playing collaborator Brian Newman afterward for a secret, short set during his show at the legendary blues club Antone’s. Maybe 200 of us packed in as she sang jazz standards “I Can’t Give You Anything But Love,” “Ev’ry Time We Say Goodbye,” and “Just a Gigolo.” Here’s hoping her newly-announced residency in Las Vegas includes some of this flavor.

We were so fortunate to have witnessed the Screaming Eagle of Soul’s performance in Wiggins Park less than two months before he succumbed to his battle with cancer on September 23rd. My eyes still well up with tears when I think about that man reaching deep in his frail body to share his soul with us on the River stage that day. It seemed like he knew his end was near as he sagely advised the audience to get right with the people we love, deeply inhaled a bouquet of roses, and tossed each flower out separately to people in the crowd. What a parting gift. What a treasure that man was. We were so lucky.

“Good company and grief sit like a dark leaf sits beside a stinging nettle,” Fionn Regan sings in “Put a Penny in the Slot.” Few words have rung truer to me in my life. His debut album, The End of History, sat beside the news that my father had been diagnosed with cancer, and comforted me through the new found loneliness in Boston after most of my college friends vacated the city post-graduation. It was 10 years before I got to hear those songs live in person, though. The elusive Irishman booked only two shows in the US to support his new album, The Meetings of the Waters, and it was evident that everyone in attendance knew how special the evening was. The typical sound of chatter at concerts was replaced by the creaking of floorboards as people moved closer to the almost empty stage, all of us absolutely enthralled by this quiet and intimate performance Fionn gave with just his guitar accompanying him. The wait was absolutely worth it … but I hope I don’t have to wait too long before seeing him again.