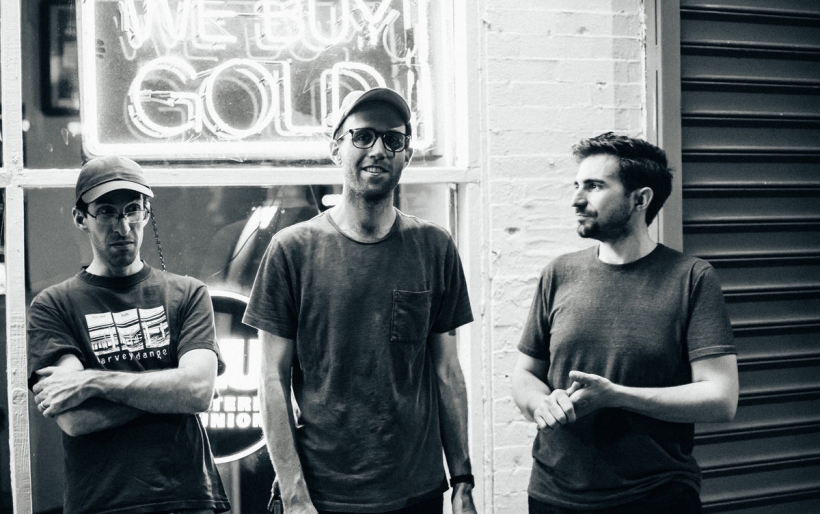 Hurry | photo by Chris Sikich | courtesy of the artist

The Art of Being Self Aware: Hurry talks coffee, dad hats, The Oneders, and their infectious new Every Little Thought

It’s about 5:30 pm on a particularly dreary Monday afternoon and Matt Scottoline is sitting across from me, politely trying his darndest to hide his feelings of horror towards news I just shared with him. “I always tell people that if you want to buy better coffee, the best thing you can do is only buy coffee that has a roast date printed on the bag,” he offers half-optimistically, half-pitifully, attempting to guide the low-life caffeine junkie that I am towards a more moderately respectable life direction.

We’re chatting at a small table at Fishtown’s ReAnimator Coffee — Philly’s premiere specialty micro brew roaster, where Scottoline works when he’s not power-pop rocking as frontman of Hurry — and I had just told him that I frequently purchase and drink the likes of Maxewell House and Folgers.

As Scottoline takes intermittent swigs from an extra tall boy of fizzy water (trying to, I’m sure, calm his unease of speaking with such a brew plebeian, ormaybe more realistically because he drinks coffee all day long) I’m sipping some of ReAnimator’s drip coffee black, which reminds me like a good ole’ slap to the face that a cup of joe can be more than just some bitter bean juice. By George, it can actually taste good too.

Man, who knew that’s what happens when people put time and intricate care into their work? Because that’s what Scottoline and the crew does here. Helping his friends Mark Corpus and Mark Capriotti when they opened the shop a little more than a few years back, Scottoline stuck around working at the café until eventually evolving into his current position as Director of Coffee. This simultaneously epic and simply-named title entails tasks such as figuring out what coffees to buy and roast, and essentially handling quality control.

Basically, he’s ReAnimator’s coffee grounds-keeper. And though we only spoke on the topic for a few minutes in lighthearted fun, it was easy to gather the level of seriousness he puts into this work. The same is true for his other artistic project, Hurry.

To anyone who’s ever spoken to Scottoline — or has taken a gander through Hurry’s hilarious Twitter account — it’s no secret that he makes his wholesome, dry humor and self-awareness refreshingly and comically transparent.

As his official artist bio states, Scottoline is a “natural salesman” when it comes to promoting his tunes. His latest business venture? Virtual hats. A man ahead of his time, Scottoline offers merch for the web-savvy Hurry fan, by ways of an app that allows you to “look at yourself on Google, while wearing a Hurry hat.”

When I asked about it, he didn’t just tell me, but provided a personal Steve Jobs presentation fairly similar to the video below, sans black turtleneck.

And who better to take the next step in hat-wear than the originator of band hats himself. “Some academic should research this at some point, but I believe I was the first band to have novelty hats,” says Scottoline. “Like dad hats. I really think I was one of the first bands to do that.”

Though he frequently pokes fun at industry practices (albeit maybe excepting the dad hat origination) don’t let this fool you into thinking Scottoline doesn’t take his music seriously. He just doesn’t take himself seriously. “The way I’ve always tried to carry myself in my music is being self-aware,” says Scottoline. “So often I feel like bands and musicians are like inflating the importance of what they’re doing. Or taking things seriously like ‘oh here comes my new album. It’s my art. It can feel self-important a lot of the time, which is hard for me to relate to.”

He continues, “I don’t think any musician is important. I don’t. I think people canmake great art and great music, but you’re not better than anybody. And what you do isn’t better than what anybody else does.”

Hurry began circa 2012 as a solo project for Scottoline as his previous band, Everyone Everywhere, started to wind down. Taking from the aesthetics of Philly’s DIY scene, while also still a bit timid in starting this new leading man project, Hurry began as a little louder and a little crunchier. “I definitely thought that was like a cool aesthetic at the time. I was into it,” Scottoline explains. “And also I think the fuzziness helps cover up any flaws. It was sort of like a safety, comfort thing,”

With Rob and Joe DeCarolis later joining to round out the current lineup, Hurry also expanded in its growth and experimentation in the sophomore record, Guided Meditation. Shedding a bit of that fuzzy security blanket, Scottoline challenged himself to try something new. “The logic I followed was that any time I would make it loud last time, I was going to make it the opposite of loud. Just to see what happened.”

Following this method has led to a natural progression over time, which especially in the new record, Every Little Thought, has revealed the true sound that was shining from Hurry’s core all along: clean and pure power-pop music.

This catchy infectiousness heard in the new tracks immediately brought to my mind influences from the 1996 film, That Thing You Do! band, The Oneders. Telling Scottoline this, I was met with a bigger backstory than I had imagined.

Apparently, Scottoline has been a big fan of the Tom Hanks directorial debut ever since he saw saw it as a wee lad back in elementary school. And double apparently, along with the big boys of The Beach Boys, The Beatles, and Michael Jackson, this fictional 1964 pop band was one of Scottoline’s biggest musical influences.

When he was a kid, Scottoline tells me he had a recorder just like the one Macaulay Culkin uses in Home Alone 2, and would use it to record himself playing along to the That Thing You Do! soundtrack CD on his boombox. “It sounded horrible,” Scottoline laughs. “Even when I was however young I was, I was trying to make my own “That Thing You Do.”

With a myriad of jams already in the books though, and a plenty more in the new record, Every Little Thought, Hurry is far from a one-hit wonder band. The goal of making hits though — poppy, catchy, hooky hits — is ultimately what Scottoline aspires to.

Though the world of Marren Morris and the song’s co-contributor Zedd may seem like a different dimension of Matt Scottoline, he explains how the methods and production are actually pretty similar. “It just sort of comes out of me in a very specific way. And it’s influenced by more modern things I’ve heard that inspire me in one way or another. When you parse through what instruments are being played and how it’s produced at the skeleton of it is always kind of the same.”

So who knows? Maybe one day you’ll be wearing your holographic 2.0 Hurry hat while watching a Target commercial with Hurry jamming along. That’s a kind of future I am very ready for.

Hurry will be playing Everybody Hits this Saturday with Worriers and Amanda X. Find more info and tickets to the show here. Listen to a stream of Every Little Thought below, and get the album now via Lame-O Records.