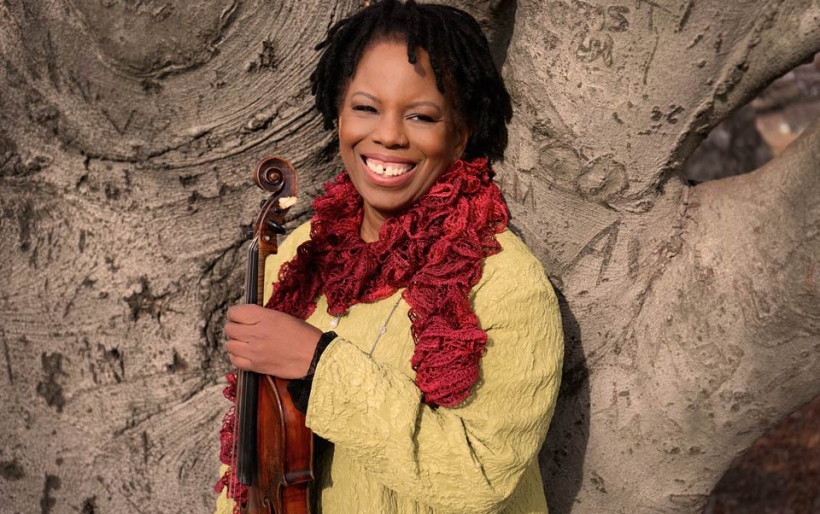 Regina Carter | photo by Christopher Drukker | courtesy of the artist

By Shaun Brady
March 01, 2018
10:03 AM
Share
Regina Carter | photo by Christopher Drukker | courtesy of the artist

It seems impossible these days to conduct an interview where the name Trump doesn’t come up. Whether a particular project is intended as a social statement or not, the reach of current debate is such that it seems to touch inevitably on every set of music. Drummer/composer Bobby Previte has never shied away from injecting politics into his music, so he was well primed to enter the fray in this most fraught of times. He’s also never been predictable in his choices, and both of those tendencies come to the fore in Rhapsody, the new song cycle that he’ll bring to the Painted Bride on Saturday. The piece deals with the idea of migration, a timely notion made all the more universal by being couched in a narrative of travel sung by the gifted vocalist Jen Shyu. The outstanding band for the event also features Wilco guitarist Nels Cline, MMW keyboardist John Medeski, Björk harpist Zeena Parkins and saxophonist Fabian Rucker. [TIX / INFO]

Musical migration has been an important factor in the music of pianist and bandleader Arturo O’Farrill. The Mexican native founded the Afro Latin Jazz Alliance in 2007 in order to promote the role of Afro-Latin music in jazz and beyond in performance and education. The organization is the home base for his thrilling big band, the Afro Latin Jazz Ensemble, which he’ll lead at the Clef Club on March 17. Far from a strict preservationist, O’Farrill has used the ensemble to explore the fusion of jazz and Latin music in a variety of ways, from the traditional to the modern, leading to an eclectic and electrifying repertoire. [TIX / INFO]

The changing of the seasons has long been a source of inspiration, with artists from Vivaldi to Monet creating masterworks from the cycles of nature. In 1876 Tchaikovsky created “The Seasons,” composing a new piano piece each month. In 2015 saxophonist/composer Ben Wendel, best known for his work with the jazz, rock and electronica-juggling quintet Kneebody, followed in the Russian master’s footsteps, engaging in a series of YouTube duets with fellow modern jazz luminaries like Julian Lage, Joshua Redman and Ambrose Akinmusire. The impressionistic pieces were a vivid evocation of shifting light and color, basking in warmth and admiring the still, frigid beauty of the cold. He’s now expanded those duet pieces for a new quintet built from original “Seasons” participants – pianist Aaron Parks, guitarist Gilad Hekselman, bassist Matt Brewer and drummer Eric Harland – and will bring the project to Chris’ Jazz Café on March 9 before taking the music into the studio. [TIX / INFO]

Spike Wilner is as well known in jazz circles as a scene-maker as he is as a pianist. One of the leading lights of the now-legendary ‘90s scene at NYC club Smalls, he bought the club when its doors threatened to close, and later added the intimate room Mezzrow to the neighborhood. At Matt Yaple’s @exuberance on March 16 Wilner will let someone else worry about the space and shift his focus back to the piano, where he’s a genre- and era-spanning stylist with a graceful lyricism and ebullient swing. He’ll lead his trio with bassist Tyler Mitchell and drummer Anthony Pinciotti. [RSVP]

Speaking of swing, few drummers have done more to define that concept for subsequent generations than Jimmy Cobb. As the man behind the skins on Miles Davis’ iconic Kind of Blue, he’s taken on a position of profound influence simply due to that album’s indelible impact on the history of the music. Not that Cobb stayed set in 1959, though his playing has continued to carry the torch for classic straightahead jazz; he’ll play at South on March 11 backed by young pianist Emmet Cohen and his trio. [TIX / INFO]

Longtime New Yorker jazz critic Whitney Balliett famously referred to jazz as “the sound of surprise,” and Philly-based saxophonist Mike Casey has certainly drawn inspiration from that description – so much so that he borrowed the term for the title of his 2017 debut. Both that album and his new follow-up, Stay Surprising, were recorded live over the course of a single night at the Side Door jazz club in Old Lyme, Connecticut, with his loose-limbed trio featuring bassist Matt Dwonszyk and drummer Corey Garcia. Those albums, which draw on the piano-less legacy of Sonny Rollins’ influential trio, give an idea of what to expect from the band’s March 23 show at the Art Museum: an eclectic mix of repertoire from jazz standards to classic rock covers, explored with a raw edge and the spark of in-the-moment wit. The PMA show celebrates the second album’s aptly surprising release, which will be unveiled a track per month throughout the year. [INFO]

Regina Carter has always brought a soulful lyricism to the violin, so it comes as no surprise that the mighty Ella Fitzgerald was an early influence. Last year, Carter shouldered aside a host of homage-paying singers to craft Ella: Accentuate the Positive (OKeh), a standout among the many projects conceived to celebrate the centenary of the First Lady of Song. Aside from the title tune, which places the sermon-like lyric in a deep south gospel church with Miche Braden’s fire-and-brimstone preaching, Carter skipped over the obvious choices – there’s no “A Tisket, A Tasket,” no “How High the Moon” – and reached deeper into the Fitzgerald catalogue for a set of songs that focus on groove and blues. She’ll bring the project to the Kimmel Center on March 24, with the core band from the album: guitarist Marvin Sewell, keyboardist Xavier Davis, bassist Chris Lightcap, and drummer Alvester Garnett. [TIX / INFO]

Eclectic local presenters Fire Museum recently made their welcome return following a not-quite-yearlong hiatus. Reason enough to celebrate, but on March 24 director Steven Tobin will also mark the 33rd anniversary of the first show he ever organized, a punk bill supporting Native American prisoners, with a benefit for the Water Protector Legal Collective at DaVinci Art Alliance. The event includes a duo performance by sax great Bobby Zankel and recent Philly transfer Chad Taylor along with appearances by Sirius Juju and soprano Bonnie Lander. [TIX / INFO]