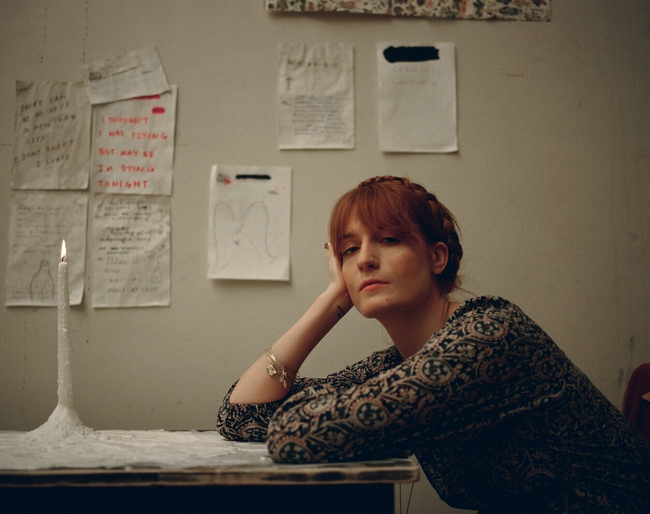 By Madorne Lemaine
April 13, 2018
12:04 PM
Share
Florence and the Machine | photo by Vincent Haycock | courtesy of the artist

British modern rock band Florence + The Machine are back after two years with a new single and music video called “Sky Full of Song.” Directed by A.G. Rojas, the video is completely black and white, with the exception of a shot of a single blooming flower at the beginning and the end; it features different simplistic shots of frontwoman Florence Welch lying on the ground with one hand outstretched, kneeling on the ground in front of a pot, and various clips of liquids mixing together.

The song itself explores Welch’s personal cathartic and sometimes overwhelming experience of performing on stage, and the emotions that go along with those feelings and experiences. Centered around her signature swelling vocals, “Sky Full of Song” is a subtle production of sparse bass and piano, and a string section that fills out the song towards the end. When speaking of the song, Welch said in a press release “Sometimes when you are performing you get so high, it’s hard to know how to come down. There is this feeling of being cracked open, rushing endlessly outwards and upwards, and wanting somebody to hold you still, bring you back to yourself. It’s an incredible, celestial, but somehow lonely feeling.”

Watch the video for “Sky Full of Song” down below, and look for a limited edition 7″ vinyl edition of it on April 21st in honor of Record Store Day.