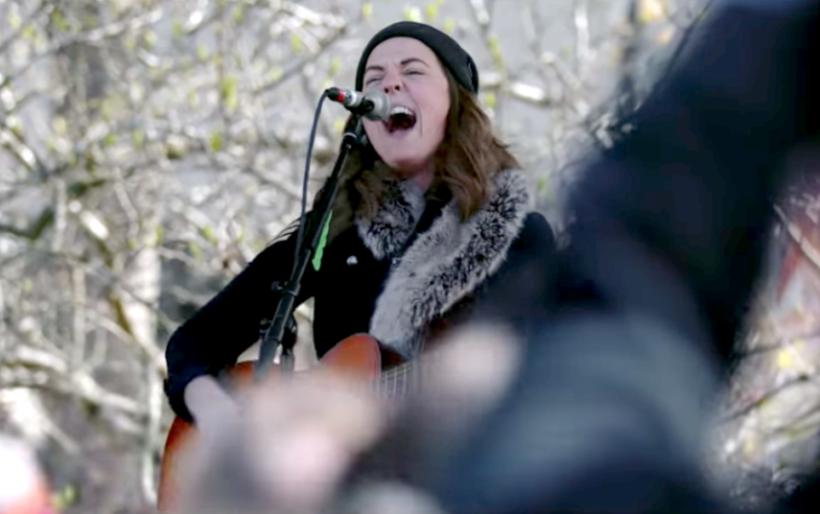 Earlier this spring, the student-organized Seattle wing of “March For Our Lives” welcomed special guest Brandi Carlile to the stage to celebrate the movement and advocate for a change in gun legislation. The rationale behind the decision to ask Carlile to perform was pretty simple, according to a report in NPR: these students know she stands with them and she isn’t afraid to say so.

Following up on her performance, Carlile released a chilling student-produced video from the March along with her song “Hold Out Your Hand.” She issued a statement to go along with the video:

“The kids in this video left their houses, put down their phones and showed up in Seattle to protest gun violence and ask for the adults in this country to take responsibility for what’s happening to them in their schools. This is the way I would want my daughter to communicate and this is a generation I am in complete support of.”

The video starts with Carlile’s quick and quiet lyrics, which almost feel like a mantra when paired with the tone of what’s happening onscreen. It’s both bleak and incredibly powerful at the same time. The cause for the March and the attitudes of those marching are so at odds that it makes for a really impactful viewing. Once the music really kicks in, Carlile’s unbreakable voice shatters those barriers: her lyrics are a realization. This song is charismatic enough to move mountains, and just as the students were grateful that she came to raise her voice, she is grateful to them for all of their hard work.

Carlile chose “Hold Out Your Hand” as the background of the video because “in some ways that song is about intentionally placed divisions and how defeating they are.” Each clip in this video wreaks enough emotion and fight into the viewer that it’s hard not to feel inspired. It gives faces to the protestors. The end of the video is a montage of still clips of individual students, and that part just might be what gets to you the most. It’s not the yelling, the hand-written signs, or the anger. It’s the faces of each kid that you must look at in order to understand this gravely human issue.

When artists use their enormous platform for good, that’s where change grows. You can watch the video for “Hold Out Your Hand” below.