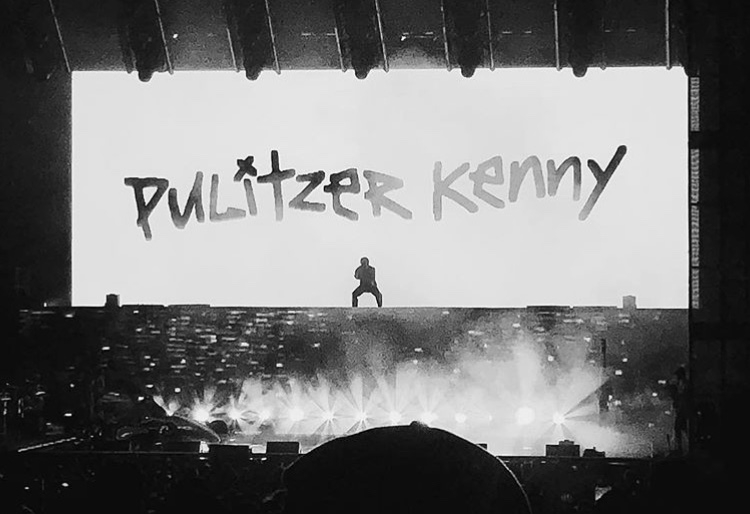 Kendrick Lamar continues to kill it in Camden

These words were the first to emblazon the massive screen behind Kendrick Lamar as he kicked off his headlining set at BB&T Pavilion last Friday. This screen, towering atop another that doubled as a platform where he prowled throughout a ferocious rendition of opening salvo “DNA,” both reminded everyone of Lamar’s most historic artistic achievement to date and provided as succinct a description of the night as any Tweet or blurb.

Sure, Lamar’s set was but the last in an electrifying evening of music dubbed the “TDE Championship Tour,” featuring an Avengers-worthy roster of Lamar and label mates from Ab-Soul to Schoolboy Q. But make no mistake. From doctored banners listing each of his albums’ accolades, to a stage set up of checkered flags and a customized Formula 1 race car, to that screen, this evening was ultimately a victory lap for a modern rap legend at the top of both his game and the world.

The latter sentiment was often rendered literal throughout Lamar’s whirlwind hour-plus set. As Lamar cherry-picked highlights from every release going back to 2012’s instant classic good kid, m.A.A.d city, pans of mountain tops and crashing waves projected behind him as if to show him always ascendant. Even more earthbound projections of billowing jellyfish and skidding racers seemed to move in time with whatever beat was booming across the venue at any given moment, lending Lamar the aura of a living god conducting life as symphony. That aura was only heightened by the enraptured crowd that not only heeded every command for a raised hand or illuminated cell phone, but knew every word to every song, keeping in rhythm even when Lamar would frequently tweak the tempo. By the end, the crowd effectively tried to finish the night for him, perfoming “HUMBLE.” in its entirety. Ever the benevolent deity, Lamar gamely allowed the crowd their moment before starting the song up from the beginning and performing it himself.

The crowd, of course, wasn’t the only noteworthy assist of the night. Jay Rock reappeared from earlier in the night for renditions of “Money Trees” and “King’s Dead”, the latter from the recent Black Panther soundtrack. Zacari lent his ethereal falsetto to “LOVE.”, even more lush and languid in a live setting than on record. An obscured but omnipresent band brought vital texture to what could have easily—and successfully—just been a performance with backing tracks.

But again, the night (and Pulitzer, lest we forget) belonged to Kenny. He was just gracious enough to share. His grandiosity as a presence was matched only by his generosity as a performer, whether it was reaching deep into his catalog for highlights to excite his “Day 1” fans to inviting younger attendees on stage for his final goodbye to Philly for the night. It was gratifying to see someone who has already lapped his competition countless times over at this time pull over to bask in the joy of everyone who’s been watching and cheering him on from the cheap seats. The night was both a celebration and solidification of his status of an icon from and for the masses.