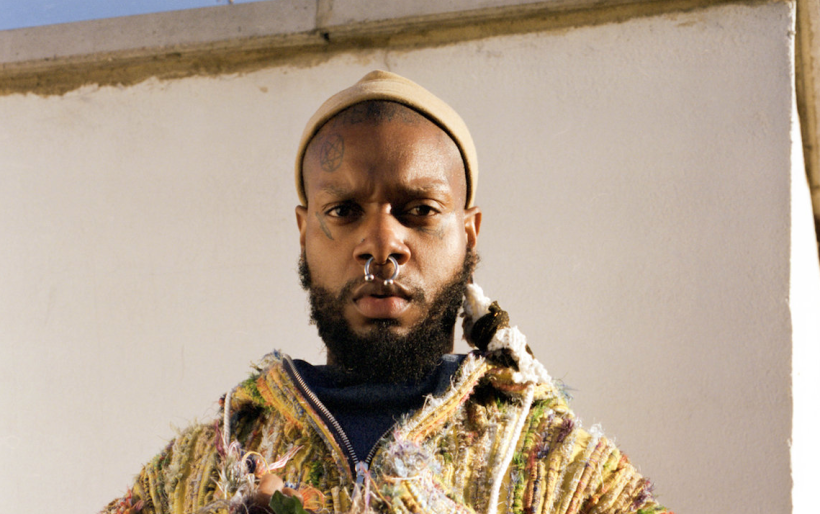 serpentwithfeet | photo by Ash Kingston | courtesy of the artist

Experimental pop-star serpentwithfeet is an artist who knows how to power clash, both sonically and emotionally. His music is at once vulnerable and volcanic as influences from the baroque to the Björk collide with each other. On stage, his presence is imposing yet inviting. His debut full length soil, out now on Secretly Canadian and Tri Angle Records, finds him wearing these occasionally messy dualities like finely tailored couture as he sings about the comforts and complexities of queer love. It’s somehow more expansive than his 2016 EP Blisters and more incisive.

He’ll be realizing these narratives on stage at Johnny Brenda’s in Philly next week. It’ll be a semi-homecoming for serpentwithfeet (born Josiah Wise), as he attended The University of the Arts in Philadelphia before ultimately moving to New York. To prepare for his return, I had the chance to chat him up about what motivates his creative output, how and when to exorcise one’s inner should, and what parts of Philly he always remembers to visit when he’s back in town…

The Key: This album seems to be about exploring and reveling in the “concept of mess.” What do you mean when you talk about that and what drew you to it as a concept?

serpentwithfeet: I think, generally, that I wanted to lean into things that were unsavory. With both vocal production and instrumental production, I wanted everything to feel very lived in. I wanted everything to feel really rich. I think that to achieve that richness, it required me to use all of my resources, all of my ideas. Of course I wanted to curate them so that it wasn’t a shit show, but I think I needed to not make it too pristine.

I also think of it, philosophically, in terms of the tyranny of the “should”, like “I should feel this way” or “I should look like this” or “I should have this particular attachment style at my age.” I was really interested in dismissing or letting some of that “should” go and seeing how I felt after that. I went into it originally wanting to make something a little more restrained, with vocals that were much “prettier” and more elegant. It didn’t always turn out like that. It was a growing up moment for me to let things be a bit more messy, let the vocals be a bit more wild.

From there as a concept, I was embracing mess on the production, and with the things I was talking about. On “cherubim”, for instance, those lyrics could have very easily been edited. I could have changed those thinking “This isn’t right. People are going to think I’m some clingy or creepy person or whatever.” I just needed to avoid feeling like that and focus on what the song asked for. I mostly just wanted to be bold, which meant being messy.

TK: I love how you termed it “the tyranny of the should”. I think that so aptly describes what a lot of creative people and queer people experience in their lives. Now before this project, you performed in church choirs when you were younger, as well as in various neo-soul projects during your time in Philly. Was this reckoning with that tyranny something that only began with this album or does it go back through your history as a performer?

There are so many artists that I love and admire whose work I look at with heart eye emojis, and I think it’s important to acknowledge that I have my own experience and process, and honor that like they do. You hear it on the Blisters EP too, me trying to make sense of my classical background as well as my R&B and gospel background and how they fit into what I do now. I’m always navigating that and it’ll probably never end.

TK: What current artists do you have heart eye emojis for?

SWF: I’m a huge fan Tierra Whack. Tierra Whack is incredible. She’s a singer and a rapper. She just put out her album (Whack World*) but she had all of these singles on YouTube and Spotify that people are flipping out over. I think she’s brilliant. She’s 22 so I think it’s important to think about the next generation of folks who are inventive and don’t have a ceiling. Her vocals and her concepts are just incredible.

TK: Are you the kind of artist that instantly begins work on the next project after finishing something like this album?

It’s very important for me to know what the next thing is and what it feels like so I’ve already got mood boards, song titles and ideas. I’ve already started recorded demos. It’s important to think “I did this. Now what can I do to push it further.” And it’s fun for me.

TK: How does the negotiation between trying to sound messier and your more pristine background play out in your live performances?

SWF: I think the live shows informed the album, actually. I’m pretty wild on stage and that’s something I’m still getting used to. I still scare myself a little bit because I used to want to be this really restrained performer. Not that I don’t have moments of restraint or let the pendulum swing that way live. I just think it’s important to embrace that I’m a little crazy when I perform and that’s ok. I don’t sing songs the same way twice. I’ve learned to embrace my style and how I’m a little more unhinged and that’s ok. I’m enjoying leaning into that.

TK: I actually got to see you perform with Perfume Genius last year and I saw what you’re talking about. It was impressive to see.

TK: On the new album, you went from working with The Haxan Cloak like you did on Blisters to working with Katie Gately. What is the origin of that relationship?

SWF: Well I met her before Blisters came out. We started working on music around August 2016 via email. We’d send ideas back and forth and then we finally met in person in October of that year. That music didn’t make it onto the EP, but we did the song from soil called “whisper.” We co-wrote that song together. That one song turned into six that we co-produced. I really love working with her. She’s an incredible thinker, very imaginative. She’s someone that’s also a little unhinged. I really value that. She was someone who was able to push and push me, and I love working with her.

TK: Do you think that unhinged side is something you have to find in life or do you think it’s something people have by default and maybe lose to their “should”?

SWF: Well I think everyone has great instincts. I think it’s the institutions, whether that’s religion or learning institutions or family dynamics that get in the way of that. I think for me, it’s trying to acknowledge that I’ve been in a lot of different spaces where the “should” has blocked me from being my most free self. I think we all start with that though.

TK: I love that, like me, you grew up in Maryland and then made the move to Philadelphia for college. Do you have any fond or formative Philly memories from living here?

SWF: The first thing that I’m thinking about is a restaurant called Kaffa Crossing. It’s an Ethiopian restaurant in West Philly. I spent so much time there thinking and working through ideas and writing. The food is incredible. It’s a couple that owns it and they’re always so sweet. Every time I come to Philly I try to go there. I always order the same thing. Stuff like that is what I love about cities.

*He’s not kidding about that Tierra Whack album. Give it a listen. It’s wild.

serpentwithfeet plays Johnny Brenda’s on Tuesday, June 26th. Tickets and more information on the show can be found at the XPN Concert Calendar.