For as long as I have been alive, Hip Hop has had a home in the city of Philadelphia. Some of my earliest experiences with this music and culture would become inextricably linked to my understanding of my own personal identity and my place within the broader community. Following its initiation in the early 70s, Hip Hop quickly flowered outward from its homebase in The Bronx, moving into urban centers throughout the nation, taking root and intermingling with each city’s local slang / vernacular, music, dance and visual art cultures.

Long acknowledged as one of the original flashpoints for Graffiti culture, Philadelphia Hip Hop’s heart has always been intertwined with the streets. The first generation of Philly youth touched by this cultural revolution would immediately hit the ground running, developing their own unique local scene and quickly producing a number of MCs and DJs (Jazzy Jeff & The Fresh Prince, Cool C, 3X Dope, Schoolly D, Lady B etc.) that would reach great creative heights and commercial success. Aside from the commercial victories of a handful of acts, Philadelphia’s formative Hip Hop scene remained largely unheralded, birthing a new class of solo acts, groups and crews who would never attain more than local notoriety.

Throughout the 80s, Philly Hip Hop had evolved into a dynamic cultural force. The music could be heard in clubs, skating rinks, parks, rec centers, street corners and block parties throughout North Philly, South Philly, West Philly, South West, Germantown, Logan, West Oak Lane, Mt Airy, Wynnefield and all points in between. As a child, I was fortunate enough to witness this all first hand. My older brother Devin was among that first generation of Philly youth (Gen Xers born between the mid 60s to late 70s) to be bitten by the Hip Hop bug. Some of my earliest musical memories involved family outings to see my brother’s rap group The Devastating Four (a group led by a trio of fierce Women MCs) perform at talent shows around the city. At home I would watch Devin and his friend DJ Threat making beats, experimenting with samplers and drum machines. This ignited a a curiosity in me that would develop into a full on life passion for creating Hip Hop music. 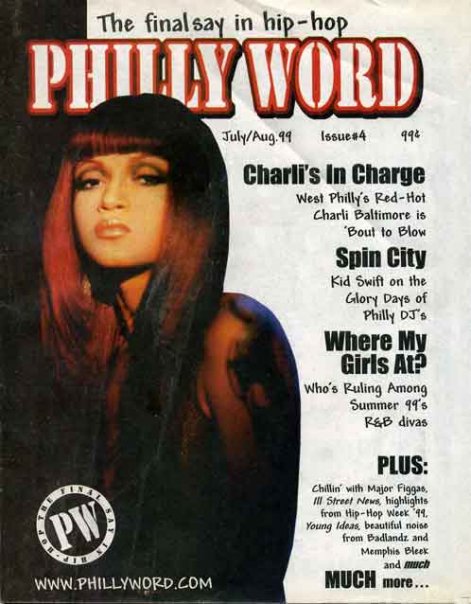 Catalyzed by the shooting death of my father, I began to write raps in the spring of 1990. I poured all of the childhood pain, confusion and joy I was experiencing at that time into countless notebooks, and homemade cassettes recorded on a Karaoke tape deck my Mom got me for Christmas. By then, the playful, party-oriented sound of early Rap had largely fallen out of favor. The music had grown a harder and in some ways more abstract. As the 90s wore on, the schism between major label backed commercial Rap and its independent, underground counterpart grew wider. What started off as a simple material divide between the signed and the unsigned began to take on deeper aesthetic and ideological implications. As a teenager, I had sided with the legions of underground heads in my city and around the world, railing against “the mainstream” and delving deeper into more and more complex styles of MCing. Through this period of great creative growth in my life, my friends and I took it upon ourselves as fans and would-be artists to explore this vibrant world that existed just beneath the city’s cultural surface. Whether we found ourselves posted up at an open mic, battling on street corners, digging in record shops like Cue Records, Sound of Germantown and Armand’s (the original location), catching wreck in lunchroom cyphers or sparking heated debates on the back of SEPTA buses spiraling through the city, Philly Hip Hop had raised us and opened up a world of creativity that I personally have not left since.

Before Bill Clinton signed the Telecommunications act in 1996 that would essentially restructure radio as we knew it, allowing for large corporations to buy up smaller, formerly independent stations, FM radio was much more autonomous and specialized. DJs and program directors were free to tailor their playlists to the tastes of their local audiences. This was a stark contrast to today’s airwaves that are essentially dominated by narrow corporate-dictated Top 40 playlists. Late night Hip Hop mix shows like Power 99’s Radioactive, WPRB’s legendary Vibes & Vapors, Q-102’s Hip Hop Revue and many others infected our ears with the freshest sounds from both national and local acts. By this time, a host of amazing local acts were trying to make their way through the notoriously competitive rap scene. With my tape deck set to record, these mix shows stretched my imagination and deepened my understanding of what was happening in my city’s music scene. In the brief breaks between the music, we were kept in the loop by advertisements  for underground rap shows at Club Dances, Space/Motion on Front Street, the famed West Philly Punk venue The Fake House and the legendary Philly Woodstock (it was exactly what it sounds like, dozens of Philly Rap groups performing at an all-day DIY festival, Woodstock style). In addition to many artists from New York, Oakland, LA and Chicago that I loved as a teenager, a great deal of homegrown underground Philly rap had begun taking up considerable space in my walkman. In reminiscing about this time in my life and putting together a playlist that would serve as it’s soundtrack, it became overwhelmingly clear that some of my memories had been colored by the tint of nostalgia and the passage of so much time. Certain songs sounded different than I had remembered, events and releases came at different times. Despite this, compiling this playlist has deepened my appreciation for just how varied and colorful Philly’s underground rap scene was in the 90s. From Hardcore street crews like Ram Squad and Tasc 4orce (who later changed their name to Naam Brigade), and the abstract esoterica of Jedi Mind Tricks to the technically advanced lyricism and uptempo beats of Freshco & Miz and 2 Kannon (whose classic “Keep It Going” was produced by one of the city’s greatest, most unheralded DJ/Producers Groove DaMoast), Philly’s Hip Hop scene throughout this decade was able to support a number of wildly diverse acts. Much of this music is deeply connected to my memory, like riding through Fairmount Park in a relative’s car on a bright summer day and hearing John Doe & DJ Jazz’s breezy regional classic “Ease Back” blaring on the radio, or meeting a young Black Thought in my neighborhood as he sold Roots tapes out of a sneaker box. Cutting class in 9th grade, my friends and I would freestyles on the back of the bus, banging out beats on the plexiglass windows spattered with promo stickers that read “Ruggedness & Mad Drama”, or hanging out at The Mountain Brothers house in West Philly, talking music and checking out Chops’ basement studio. Some of these songs rare joints that I’ve only recently discovered like “Check It Out” by Lord Aaqil of the mythic Foreign Objects crew (whose video features a drumming cameo from a young Questlove) to regional hits like Da Fat Cat Clique’s haunting, classic posse cut “Da Flow” there are so many memories and stories of our city attached to these songs. Some stories of these stories have ended in triumph, others in tragedy. Despite the passage of time and a city that is rapidly gentrifying, with many of the neighborhoods that birthed and supported these artists being decimated, the music made in here during this time still lives on. Through YouTube, Bandcamp and a number of reissue labels like Dope Folks and Chopped Herring, some of city’s most unheralded Hip Hop is now accessible to those of us who were around then as well as to a whole new generation curious about learning what Philly’s rap scene felt and sounded like.

Below, listen to an 80-song YouTube playlist compiling some of the best cuts from the Philly underground in the 80s and 90s.