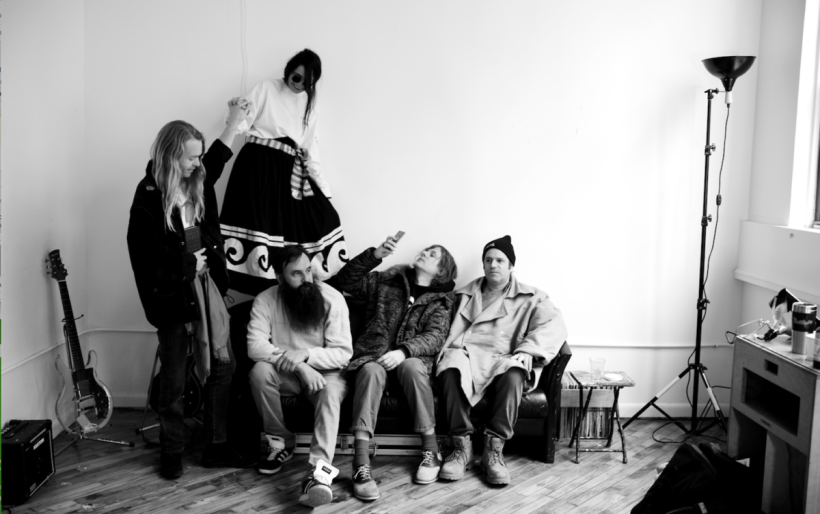 Seven years after blowing minds with 2011’s Eye Contact, the alchemists of Gang Gang Dance finally re-surfaced this summer with their most beatific sounding album yet in Kazuashita. Its ethereal ambience juxtaposes with lyrics that emerge from the ether to reference police brutality, the protests at Standing Rock, and several other forms of tumult that inform life at large.

To hear founding member Brian DeGraw tell it, making the record didn’t come without its own share of struggle. Ahead of the band’s show at Boot & Saddle this Thursday, we talked about how the record came to be, how the band’s process of making music had to change, and what to expect when they take the stage this week.

The Key: So how did you all arrive at Kazuashita as a title for this album?

Brian DeGraw: Well actually the title comes from the name of our friend’s child who was born last year.

BD: Yeah, our friend Taka is a band member who tours with us. He’s not right now because of the kid, but he’s kind of like our spirit guide. He’s Japanese and he made up the name. It’s like a weird morph of two separate words. If you pull it apart, it translates to “Peace Tomorrow”.

TK: In conjunction with that, this album dives into some very deep, relevant subject matter. What was the motivation behind that?

BD: Well I feel like it was just kind of unavoidable during the time we were making it. It almost felt ridiculous not to address it. I’m not one, at least with our music making, for making any kind of overtly political statements, but we made the record over the course of the last three years. During that period, the presidency switched over. Police brutality was at an all time high, at least in the public eye.

Those subjects were actually more Lizzy’s input. She was very immersed in the current state of affairs and she’s involved in a few activist groups. She really wanted to bring in those elements. At first, they were all over the record. We toned it down a bit to make it less overt. We wanted the record to feel more like a dream-like journey through the state of the world.

TK: You can definitely hear that. It feels more like it captures a state of mind than a direct commentary on any one thing that’s going on.

BD: Yeah it’s supposed to be a little bit dizzying, in the same way that the world is right now with being pushed and pulled towards all of these different views of the world. We didn’t want to make like a Public Enemy record. We wanted more of a hazy snapshot.

TK: You can hear that in the sound of the record as well, which is more ambient than Saint Dymphna and Eye Contact.

BD: Yeah that was a very conscious decision on our part. We wanted it more dreamy, to tone down the spazziness of the last few records, which were more rhythmically oriented.

TK: In what other ways would you say this record differs from what came before? How did the process of making it differ, for example?

BD: It differs greatly. With every other record, we started together in the studio with nothing, and just went from there. We’d record improvisations and eventually start pulling out bits and rearranging them, relearning what we’d improvised and making them the basis of songs.

For this one, we were all living in different places. We hadn’t been playing together for quite a while. I started writing skeletal ideas for different pieces and then brought them into the studio where we started building on them. It’s the first time we’ve ever done that. There was barely any improvisation on this one.

TK: How did it feel doing things this way versus how you had done them in the past?

BD: It felt really awkward, to be honest. It took a while to be comfortable with that approach. It was done initially out of necessity just because of where we were all at. We didn’t even have a rehearsal space at the time so we did what we could. It was rocky at first, but at the end, I was really grateful that we were pushed into a different way of working. I’ve always wanted to do a record that sounded way different from our other ones and this helped do that.

TK: This record was also recorded in various studios and art spaces. I like the irony in what sounds like your most cohesive record being recorded in such a fragmented manner. What did recording in multiple locales lend to it?

BD: Well I think the cohesiveness has to do with the fact that we spent more time on it. Over the span of three years, we would kind of start and then stop for like six months and then go back to it. Those interims were the first time that we were ever able to kind of process what we had, realized what worked, what needed changing. In the past, we’d make records in a period of two weeks to a month in one solid block. It was nice to have time to sit on material for a change while it was being constructed.

TK: How has this changed in process with recording affected how you perform live? I know you’ve only just started the tour.

BD: It’s really difficult, actually. Honestly we’re not playing a lot of material from this record yet. We’ve only figured out how to play maybe four of the songs in a way we were happy with, and even a few of those don’t feel just right yet. I think we’re going to play a couple of those on this tour and then some stuff we haven’t played in years, going back to God’s Money from 2005. The sets are going to be all over the place from our entire back catalog so I’m pretty excited by that.

TK: And finally, Gang Gang has played a Philly a lot over the years. Do you have any fond Philly memories?

BD: I wish I did! Philly is one of those towns that I’ve never gotten to spend more than a few hours in. My brother used to live there though, and I remember being blown away by the art museum when we visited it a long time ago.

Lately, I’ve actually been looking into exploring it as a place to live.

TK: Well I’d highly recommend it. A lot of artists have moved or lived here in recent years and really love it.

BD: Hopefully I can come down soon and spend a few days to really check it out.

Gang Gang Dance headlines Boot and Saddle on Thursday, September 6th; tickets and more information can be found at the XPN Concert Calendar.