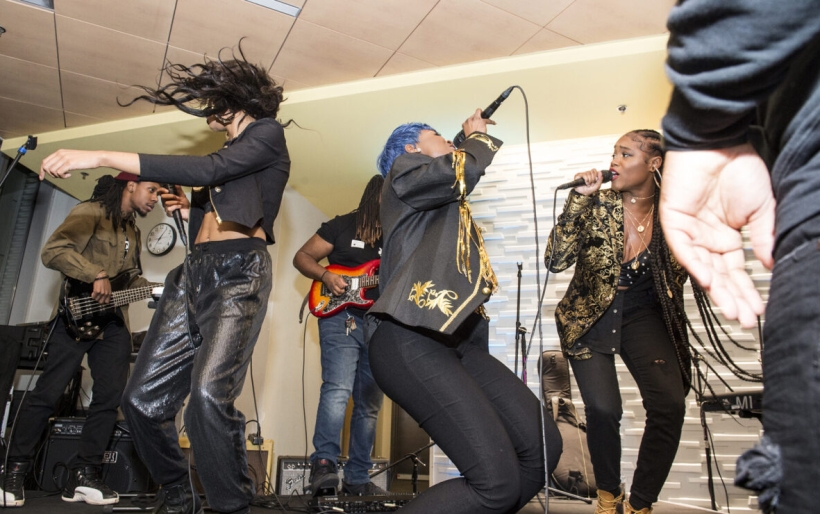 Spring Garden Records is an ambitious new project by Community College of Philadelphia launched at the tail end of 2018. A collaboration between the school’s Music department and department of Strategic Initiatives, Spring Garden Records is a record label where students, staff and community members produce, record and release their music in-house.

Music department head Paul “Starkey” Geissinger is a renowned composer and electronic musician who serves as director of Spring Garden Records. Geissinger has been spearheading the program’s launch for the past few months and envisions the project as an incubator for the city’s musical talent.

“I wanted to create a musical hub for creativity in the city, something I think we are missing,” he says. “CCP is a great place to do it, since we have a sound recording and music technology program, and most of our students are Philly residents who plan to stay and work in Philly upon graduation.” Modeled after Drexel’s wildly successful Mad Dragon Music Group label and its Music Industry program of studies, Spring Garden Records gives community college students a chance at a multi-faceted music business education while gaining hands-on experience. With its focus on a self-contained and cooperative method of record making, SGR is a modern label that harkens back to the days of legendary labels such as Philadelphia International, Stax and the assembly line-like outfit that came out of Berry Gordy’s Hitsville USA building.

“We’ve thought a lot about that concept,” Geissinger says. “A pooling of ideas and talents. Kind of Motown-ish.”

“The plan is to have students involved in all aspects of the label’s operations,” he continues. “We have a number of small groups that have been meeting. We already have some students involved in social media, and another team that will be updating and working on the website. There’s also students, faculty and others working on blog content for the site. James Sauppe, aka RVLVR, is doing a cool blog on the site entitled ‘Philly Cheese Quake.’ Basically an interview format blog but while eating cheesesteaks and rating them as well.”

On November 8th, Spring Garden Records hosted its launch party on the Community College campus with performances from the label’s roster of emerging artists. Quincy Harris, (aka Q-Deezy), host of The Q on Fox 29 hosted as master of ceremonies, and guests were given free downloads of the label’s music.

Two of the Spring Garden Records acts, Philly based R&B trio Aviance and singer / songwriter / producer Amari (the stage name of Philly born artist Shanice Manley), performed at the event and have been gearing up new releases as Spring Garden Record’s flagship artists. Amari’s debut EP features standout songs like “Hooked” and “Nebula Reflection” that bring to mind the breezy, melodic Pop-R&B that artists like The-Dream and Danity Kane were in the 2000s.

“My EP is called That One,” says Manley. “It is a collection of songs that I produced and wrote along with my friend, Josh Legions during my time as a Sound Recording Music Technology major at CCP. Some of the songs have a personal message behind them. ‘Little Heart’ was written in a time when I was struggling with being free in my own artistry.”

Staying true to Spring Garden’s aim to empower artists, That One was mostly self-written and produced by Manley herself, with Geissinger adding a little production assistance well as mixing and mastering.

“She did most of the production on the record on her own.” Geissinger recalls. “Recorded most of the vocals on her own as well. There was a little bit of extra production from one of our SRMT alums, Josh Legions, who produces under the name Cranberry Juice Bergundy, and I provided a little bit of extra production. Then I did the final mixes and mastered the project. But almost everything you hear is just Shanice on her own doing her thing.”

Spring Garden also released It’s Aviance, the R&B trio’s debut album, as part of the label’s initial roll out. Consisting of vocalists Beyyond, Dominque Nicole, and D Day The Rappa, Aviance puts a contemporary spin on the classic 90s R&B sound of TLC and Xscape, from introspective slow-burner “Imperfect” to high energy Trap bangers like “Andele.” Assembled by committee of producer including Starkey, Steve Mayfield and Shake Da Producer, the album’s sound is colorful, varied and accessible. Speaking with the group via email, they explain that most of the record was the result of a collective effort in-house at Spring Garden’s CCP studio.

“It’s Aviance was written and produced in less than a year,” the band says in an emailed statement. “We decided to approach this project with mature, fun and edgy content. We are known for our soulful voices and kept that intact. Some of the recording took place in North Carolina but mainly in Philadelphia at Spring Garden Records. Besides freely expressing ourselves artistically, we got feedback and suggestions from our producers too. This album shows off our different personalities and reveals a lot about the lives we live. Recording was fairly easy. Songs are pretty much sorted out with verses and harmony already done, so when it’s time to record it was smooth sailing.”

Throughout its history, Philadelphia music has left an indelible mark on american popular culture. Despite the constant flow of creative energy and emerging talent, the city has lacked the kind of music business infrastructure that one would find in major cities like New York and Los Angeles. Spring Garden Records doesn’t propose itself as the cure for what our city’s music scene lacks but it does provide our community with a space to use their skill and education in the mission to create good music.