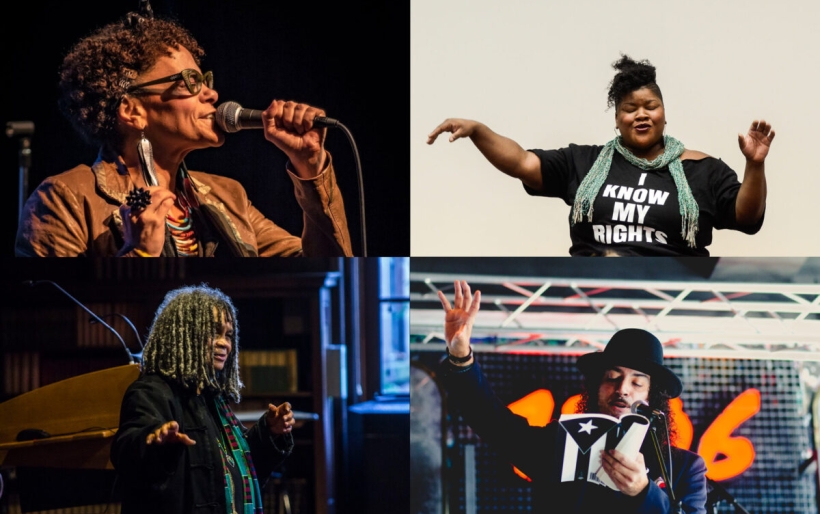 In season one, episode four of the popular early-2000s spoken word HBO series Def Poetry Jam, celebrated poet laureate and Black Arts movement co-founder Amiri Baraka performs an excerpt from his poem “Why Is We Americans.” Filmed in the wake of 9/11 against a hellish political backdrop of war, nationalist paranoia, the Patriot Act and artistic censorship (in the form of Clear Channel’s infamous list of banned songs post-9/11), Baraka’s performance is crackling with fire and righteous indignation.

Mixing it up in a style informed by jazz scatting, Marxist praxis and Black Southern Baptist preaching, Baraka’s poem triumphantly lays out a case for reparations, restorative justice and working-class revolution that was unlike anything else seen live and direct on mainstream television.

“We want education for all of us and anyone else in the black belt hurt by slavery. For all the native peoples, even them poor white people….them Beverly Hill Billies who never got no Beverly Hills, who never got to Harvard on they grandfather’s wills…”

A spin-off of the HBO’s classic Def Comedy Jam series, Def Poetry Jam sought to do for poets what its sister show did for a generation up-and-coming comedians: create a space for them to make their voices heard. Co-founded by Bruce George and artist Danny Simmons, the list of performers who appeared Def Poetry Jam reads like a Who’s Who of the spoken word movement as well as the Black pop-cultural zeitgeist. Legendary elders in the poetry community like The Last Poets, Sonia Sanchez and Baraka performed alongside the next generation of creatives such as Dave Chappelle, Jessica Care Moore, a young Kanye West and many more. On the air for five years, the show came to an end on April 25th, 2007.

This Friday — a full 12 years after the show went off the air — Simmons is staging a live Def Poetry Jam reunion at the Philadelphia Museum of Art. Though the event is sold out, a live video webcast of the event will be viewable at the PMA’s Facebook page. This week, Simmons spoke about the Def Poetry reunion and the show’s Philly roots.

“This reunion of great poets that helped build the amazing Def Poetry series is perfect for the art museum,” he says. “Def Poetry got its wings from a production showcase Bruce George and I produced at Philly’s African American Museum two years before the show aired on HBO.”

With a packed lineup of local legends including Sonia Sanchez, Ursula Rucker, and Black Ice, the reunion show promises to be a rousing event that reignites the firey, uncompromising spirit that the series brought to airwaves so many years ago.

In a phone interview, Rucker recalls making flying back to the states from a European tour and meeting both Smokey Robinson and Lou Reed, both of whom also appeared and read poems on the show.

“It was a pretty amazing time,” Rucker said. “Like, ‘what? There’s a show on HBO?’ and to this day, I don’t really fully wrap my head around it. The second time around, my third son was a baby and I was on tour and I had to fly from Venice, Italy by myself to New York City to film the segment. Meeting Smokey Robinson and getting his autograph for my mama and sitting next to Lou Reed while we both waited our turn [to tape segments], It was crazy.”

Rucker also reflected on the importance of the very platform the series provided: “At the time, Def Poetry was a super exciting thing for its freshness, for its element of opportunity, an invitation for an art form that is often relegated to the bottom rung.”

In the lead up to the reunion, Simmons lets it be known that we can expect plenty of heat from the show’s Philly-centric bill.

“These great Philadelphia poets defined Def Poetry Jam,” he says. “[They] will rock this sold out show at the PMA”

Def Poetry Reunion comes to the Philadelphia Museum of Art’s Final Friday event on April 26th from 5 to 9 p.m.; though the event is sold out, it can be watched via Facebook Live at the museum’s page.