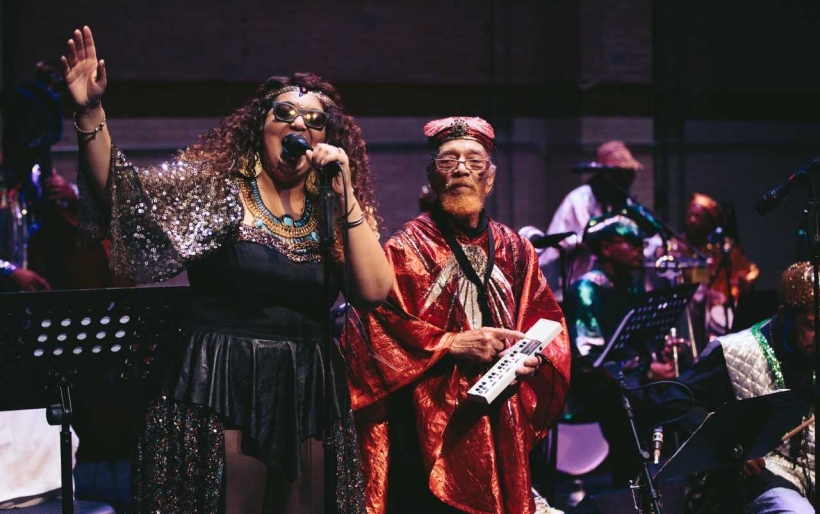 The Kimmel Center’s Jazz Residency program is now in its sixth year of presenting new music from local composers. As tends to be the case with commissioned works, the end results have sometimes been overwhelmed by the conceptual frameworks of the pieces. But at their best – the Fresh Cut Orchestra’s multi-media suite, Joanna Pascale’s exploration of Victorian flower codes, Francois Zayas’ melding of Cuban and Balkan traditions – they’ve provided artists with the ability to stretch into new, more ambitious territory.

This year’s batch of new works will premiere over the course of three nights, June 6 through 8, at the Kimmel’s SEI Innovation Studio. On Thursday, trombonist Dan Blacksberg threads together many of the influences that have marked his wide-ranging work, which spans the worlds of klezmer and avant-garde jazz. In collaboration with percussionist, vocalist and cantor Yosef Goldman, he’ll weave through the varied musical cultures of the Middle East and Eastern Europe to discover unexpected common ground. The next night, guitarist David Allen, violinist Diane Monroe and poet Raquel Salas Rivera premiere a piece about Philadelphia’s Sanctuary City status, while on Saturday composer and tres player Dariel Peniazek, lyricist Maya Peniazek and singer Ariacne Trujillo fuse Cuban influences with Sound of Philadelphia soul and jazz to muse on the idea of cultural identity. [TIX / INFO]

Of course, it doesn’t take institutional support to carve out a distinctive musical identity, and on June 13th, Philadelphians can celebrate two local groups that did just that in their own singular ways. At an Ars Nova Workshop-presented show at Union Transfer that night, Sounds of Liberation will reconvene for the first time in more than four decades. Saxophonist Byard Lancaster is no longer with us and vibraphonist Khan Jamal won’t be performing, but guitarist Monnette Sudler, percussionist Omar Hill, drummer Dwight James and keyboardist Bill Mills will return from the original line-up along with some adventurous collaborators. They’ll share the bill with the Sun Ra Arkestra, celebrating the 95th birthday of their very much still active bandleader and force of nature, Marshall Allen. [TIX / INFO]

Keeping with the local theme, it’s also a month for homecomings. That kicks off this Saturday at the Kimmel, as organ master Joey DeFrancesco stops into the venue, just up Broad from his alma mater CAPA, to sit in with Terell Stafford’s Jazz Orchestra of Philadelphia. [TIX / INFO] His classmate Christian McBride follows on June 9 at The Ardmore Music Hall with his new trio Tip City, featuring guitarist Rodney Jones and pianist Emmet Cohen. The drumless situation puts the stalwart bassist’s rock-solid time and flawless agility front and center in an intimate, freewheeling atmosphere. [TIX / INFO]

Drummer Ari Hoenig is back at what has long been a second home for him, Chris’ Jazz Café, on June 14 and 15 with his new trio, featuring pianist Nitai Hershkovits and bassist Or Bareket. The appearance comes on the heels of the release of Conner’s Days, a new album that showcases a loose and playful chemistry ideal for Hoenig’s nimble and melodic approach to the drumkit. And while Orrin Evans still lives in Philly, he’s been tirelessly logging hours on the road with The Bad Plus over the past year and a half, so his residency this summer at Chris’ with the Captain Black Big Band is a welcome return. The window-rattling ensemble will take the stage every Thursday in June and July in preparation to record the follow-up to their Grammy-winning album Presence. [INFO]

Then there are those who’ve been here all along. On June 6 at Kung Fu Necktie, an intriguing trio of Philly mainstays will celebrate the release of their new album, Channels. Guitarist Tim Motzer is an eclecticist by nature, a conjurer of immersive and richly textured sonic environments that he can mold to fit a surprising range of contexts – as evidenced by his work with such diverse artists as Ursula Rucker, King Britt and Kurt Rosenwinkel. John Swana has traditionally been associated with a more straight-ahead style, though he’s ventured into a staggering array of situations, especially as he’s supplemented his core instrument, the trumpet, with valve trombone and especially the EVI (Electronic Valve Instrument). The trio is completed by drummer Doug Hirlinger, whose impressionistic touch helps illuminate the mesmeric experience. [INFO] The same night at the Clef Club, Bobby Zankel’s new series “Philadelphia Stories Original Music” presents vocalist Ruth Naomi Floyd, who weds progressive jazz to a Christian message. [INFO]

Pianist and vocalist V. Shayne Frederick has been gracing Philly stages for more than a decade, but is just now releasing his debut album. Lovesome is mainly composed of jazz standards, though each one is transformed in the singer’s florid and soulful style. Refracted through the prism of neo-soul and hip-hop, Frederick’s take on the jazz canon approaches melody as a malleable material, which he stretches and twists into intimate, enthralling confessionals. He’ll celebrate the release at South on June 8 with a band stocked with local favorites. [INFO]

It’s not all Philadelphians this month, though…on June 1, the in-demand pianist Geoffrey Keezer, who’s played with a laundry list of artists from his teenage tenure in Art Blakey’s Jazz Messengers to work with Wayne Shorter, Joshua Redman, Diana Krall, Sting and David Sanborn, will take a turn in the intimate confines of @exuberance. [INFO] Then on the weekend of the 21st and 22nd, pianist Christian Sands – who honed his chops keeping up with McBride – will lead High Wire Trio at Chris’. [INFO] And Ars Nova has the powerhouse saxophonist David Murray in a duo set with tradition-melding percussionist Kahil El’Zabar at the Ruba Club on June 14, followed by a series of fascinating concerts in conjunction with the ICA’s Tony Conrad exhibit through July. [INFO]