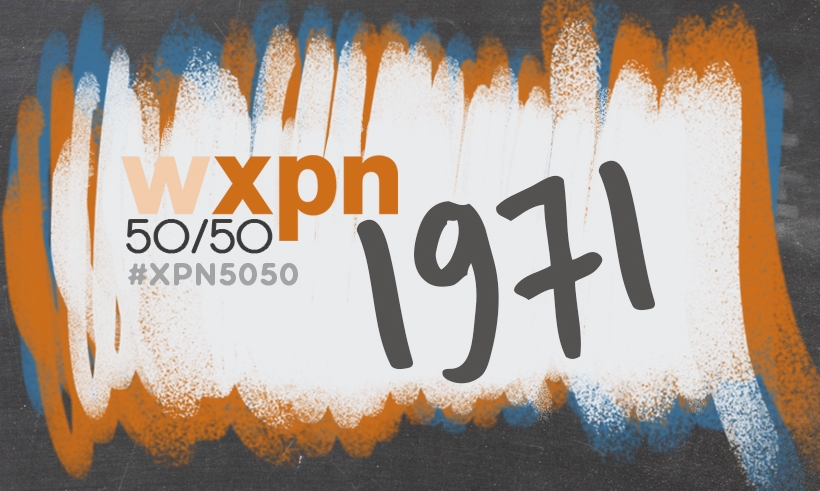 For fifty weeks this year, we’re celebrating the music of a specific year every Saturday on WXPN. We’ll be choosing the years randomly; for this week’s #XPN5050, Julien Booker is putting the musical spotlight on the year 1971.

48 years ago, the music world was alight with a heavy-hiting hit parade of now classics. Roll call: Carole King’s Tapestry. Marvin Gaye’s What’s Going On. Joni Mitchell’s Blue. David Bowie’s Hunky Dory. Sly and the Family Stone’s There’s A Riot Goin’ On. Led Zeppelin’s untitled album. (Or Zeppelin IV, if you prefer. Or Zoso. You know, the album with “Stairway to Heaven” and symbols and songs about Middle-Earth.

In the mix with front-to-back solid albums are schlocky radio bangers from Focus (“Hocus Pocus”) and Jethro Tull (“Aqualung”), as well as beautiful hits by CSNY (“Carry On”), Melanie (“Brand New Key”), John Prine (“Angel From Montgomery”) and more.

On television, the variety show Sonny and Cher Comedy Hour made its debut, as did the family sitcom All In the Family, where an indelible character was made out of Archie Bunker, a traditional suburban patriarch made to confront his own racism and homophobia on a weekly basis.

And as the album release calendar was alight with classics, so was the big screen: A Clockwork Orange, The Last Picture Show, Willy Wonka and the Chocolate Factory, Shaft, Duel and Harold and Maude.

Below, listen to a playlist of music from 1971.