Mezzanine Remains Massive, and Moody, at The Met Philly - WXPN 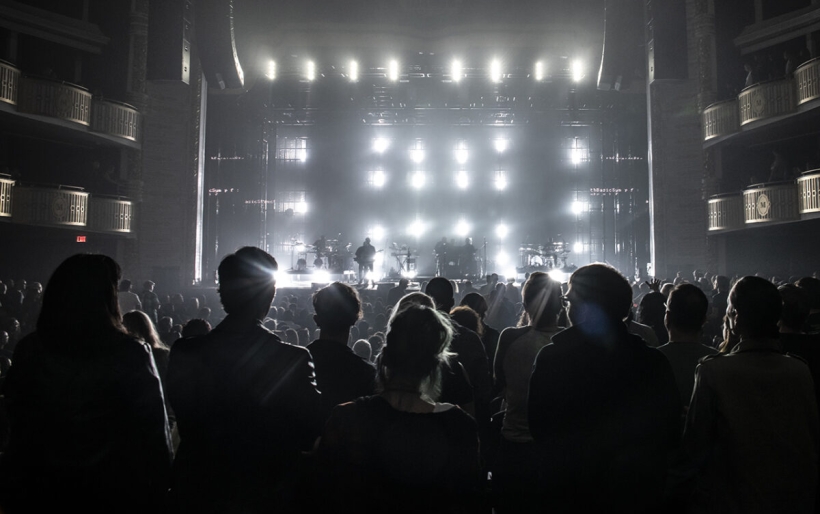 Mezzanine Remains Massive, and Moody, at The Met Philly

“All around you are two dimensional images of people who died long ago. / They say ‘Don’t bother with the future. Stay with us here. Forever.’”

That couplet was but one of many cheery ones that Massive Attack presented to attendees at The Met Philly last Friday night. It didn’t take a genius to glean the meaning behind it: Be weary of nostalgia and anyone who encourages basking in it. Such skepticism, at least in isolation, could read as contradictory, maybe even hypocritical, when conveyed during a performance literally showcasing a 21-year-old album in its entirety.

But Massive Attack’s thesis didn’t stop there. Throughout the night, we were enveloped in imagery of everything from violence in the Middle East to celebrities dead and damaged to press footage of Vladimir Putin and the current White House occupant, along with messaging that basically described the dawn of the information age like the birth of Skynet. This group wasn’t simply warning us against the siren songs of yesteryear. They were reminding us that the present sucks too, in many ways even worse.

It was through that lens that they presented us with a dark, dynamic performance of Mezzanine, their bleakest and arguably best album. Mezzanine was a heavy, lonely affair upon its release, and time has done depressingly little to numb its impact. Even with its high-profile collaborations, the feeling of isolation and conflict within it was palpable. This was not an album made for a fun group listen, and many people in attendance even greeted those who tried to treat the show as such with very vocal disdain. The tension and isolation carried on to the stage as well. 3D was the only member of the group to remain there the whole time, backed by a band in complete shadow. The other vocalists, including member Daddy G, only appeared for numbers featuring them, seemingly out of nowhere at times thanks to very deliberate lighting, as if the mood of the song would magically manifest them when needed.

Of these vocalists, longtime collaborator Horace Andy was the only one who felt anywhere close to approachable, his warm vocals providing an eye in the storm of tracks like the apocalyptic “Angel” before he would patiently jig his way back off the stage. However, it was clear who everyone really came to see. The ever-elusive Liz Fraser hasn’t done a terrible amount of performances post-Cocteau Twins, so her presence felt like a visit from the divine. Her angelic vocals remain as crystalline as ever. Her floor leveling performance of “Teardrop” was enough to erase any fatigue one may have felt for the song after eight years of House, and the way she seems to thread herself through the various layers of set closer “Group Four” to pull them together remains a sight and sound to behold. As a bonus, she lent her elegance to an especially elegiac cover of Pete Seeger’s “Where Have All the Flowers Gone”, one of the more mournful moments of the evening even without the aforementioned Adam Curtis imagery behind it.

Other covers were used to tie the set together, almost all of artists who were sampled on the album. The opening one-two punch of The Velvet Underground’s “I Found a Reason” into its use on “Risingson” was a particularly strong moment. Such moments only reinforced the need to reconcile our dystopian present with the too often forgotten darkness of our past. A final message to the crowd emblazoned the screen after everyone left the stage, encouraging the crowd to leave all of that behind and start imagining the future. One can only hope that everyone in attendance obeys and presses on. While Mezzanine remains a powerful and prescient piece of work, it would really suck if it was still a suitable soundtrack for our times in another two decades.