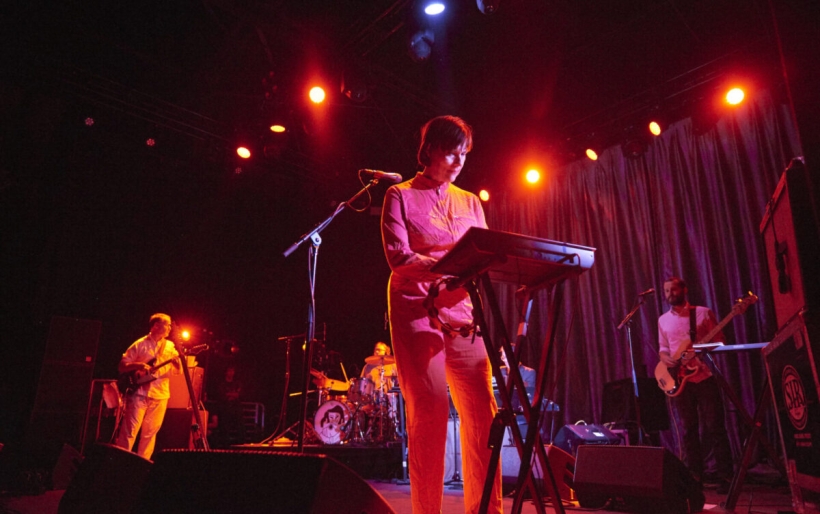 Spoiler Alert: Stereolab still got it

The air was buzzing in Union Transfer long before the speakers started to as the lights dimmed at the super, seriously sold out Stereolab performance last Thursday. The crowd, diverse but unified in anticipation, packed itself as tight as humanly possible, then a few inches closer, as robotic intonations of “INSERT. COIN!” began to blare. Those intonations increased in volume and frequency, and one began to wonder if the intention was to get the show going or the crowd. Either way, it seemed to work on both fronts. Once the members of the iconic, still influential avant pop band splayed across the stage to feverish applause, and a different, more recognizable buzz began to kick off show opener “Brakhage”, there was no stopping or containing the thrills. The band’s whirlwind two-hour set of canon classics and fan favorites simultaneously felt fleeting and infinite, like one of those coin operated carnival rides you enjoy in your youth.

Naturally, the set was rich with and evenly divided amongst albums from the band’s recent round of reissues. The debate over which of their mid-90s peaks was the “best” * seemed to continue in real time on stage, as songs like “Ping Pong” from motorik masterpiece Mars Audiac Quintet went head to head with “Percolator” from electro-experimental epic Emperor Tomato Ketchup. The band never missed a step from song to song, and it was hard to believe it had been nearly a decade since their last performances together. In fact, they’re still capable of surprises in how they play. Early highlight “French Disko” was rendered ferocious with a faster, punkier tempo while already extended numbers like “Metronomic Underground” and “Anamorphose” were stretched even further like sonic taffy, and somehow still felt like they were over too soon.

Another pleasant surprise: the band was warmer than I remembered, in both sound and demeanor. Letitia Sadier was always quick to thank the crowd and politely yet playfully introduce the next song knowing the reception she was about to get. Said reception was just as rapturous for cuts from the group’s more underrated efforts. Sound-Dust’s “Baby Lulu” sighed and swirled with hypnotic intention, while Margarine Eclipse standout “Vonal Declosion” galloped seamlessly out of its older sister “Miss Modular”.  The performance built patiently but propulsive, like one extended climax that came to a head with Retrofried Ectoplasm rockers “John Cage Bubblegum” and “Lo Boob Oscillator” before an encore of all timer “Jenny Ondioline” seemed to summarize all the sounds and beats we had just heard in about 15 minutes. Again, even at that length, the song felt like it was just getting started.

And that really describes the continued appeal of Stereolab in a nutshell. Despite nine years of absence and nearly thirty years of groundbreaking music to their name, they still sound fresh, fun, and capable of anything. Who can say where things will go next? All I can recommend is seeing them where and when you can. Or at least reacquaint yourself with their discography. Either way, insert the coin and enjoy the ride.

*It’s totally Ketchup, right? Or is it Dots and Loops? Ah forget it.